We're a few hours from New England, but summertime stirs up hankerings for seafood just the same in the Big Apple as it does up north. Get your fix -- whether it's lobster, crab, tuna, clam or oyster you crave. These are our favorite seafood sandwiches in the city, from lobster rolls to authentic NOLA po' boys.

This neighborhood favorite boasts a fun yet sophisticated atmosphere, and the lounge recently launched a flavorful new small plate and bar bite menu to match. Pounds & Ounces likes to put an emphasis on sharing plates, but it's our guess you'll want to keep this tuna sandwich all to yourself. Cooked with wasabi dressing, lettuce, tomato, crispy seaweed and served on brioche roll, it's topping our list of 2013's best seafood sandwiches.

The brass at Egg say nothing sells quite like their breakfast (we should know - we've already raved about it), but the fried oyster sammy is also a cult favorite. As restaurant owner and chef George Weld puts it: "There are people who come in just for the oyster sandwich, to the chagrin, in the past, of some of our cooks, who'd prefer not to have to shuck oysters every time an order comes in." The sandwich is cornmeal-crusted oysters, spicy mayonnaise and lettuce on a roll, served with french fries or a salad.

This clamshack in Gowanus (no, the clams are not from the canal) has  attracted a devout following for its New England style clam roll, among other treats from the sea such as lobster rolls and steamer clams. On the drinking front: Choose from a small selection of wines, with a focus on local varieties, or from five beers on tap including Ithaca Flower Power IPA, Captain Lawrence Smoked Porter and Greenport Harbor Ale.

We know BLTs are serious business in New York City, and this trendier take on the traditional sandwich is succulent summertime fare. Seared rare tuna, smoked bacon, gem lettuce, tomato and caper aioli are served on Rustica bread at Isola Trattoria and Cruo Bar. The restaurant Italian retreat in the heart of SoHo, with a fancy garden dining area.  The upscale dish is served alongside an extensive wine list, but if you'd like to try it -- make reservations first.

The "lobster wars" among the city's seafood-themed food trucks mean New Yorkers are treated to all sorts of creative takes on seafood sandwiches. One of our favorites is the Lobster BLT from the Red Hood Lobster Truck. The sandwich comes on the same lightly-toasted, top-sliced bun the truck uses for the lobster rolls. In addition to a healthy dose of lobster mixed with apple chipotle mayo, there are 2 thick slices of bacon and tomato on the bun. It's all topped with paprika, which gives the sandwich a nice color, and adds a slightly smoky flavor that complements the lobster really well.

Aquagrill Oyster Bar has made a splash on the seafood scene, consistently finding their way atop Zagat rankings of the city's best raw bar and best seafood restaurants. Along with the extensive raw oyster selection, the SoHo seafood spot boasts a number of seafood sandwiches, including the Aquagrill Sandwich: Roasted Dungeness Crabcakes, sweet veggie slaw and tarragon tartar Sauce. One of the pricer items on our list, costing you a cool $17.50.

This bustling gastropub 5 Napkin may be named for their juicy burger, but the Blackened Mahi sandwich from their Astoria outpost will make any seafood lover's mouth water. The ocean-inspired sammy is served with bacon, lettuce, tomato, rosemary aioli on a brioche roll and comes with a side of fries for $15.95.

Seafood at a ballpark may make you hesitate, but rest assured, springtime baseball warrants the excellent clam chowder to warm you up on a cold evening. The real gem at Catch of the Day is the crab cake sandwich – nearly all lump crabmeat topped with housemade tartar sauce, it is sure to please a seafood-loving stadium goer. A better choice than the location's subpar lobster roll (pictured).

If we're going to mention lobster rolls, we must show our appreciation for Luke's Lobster. With old-fashioned tile floors and buoys in the window, this wildly popular spot tosses its fresh Maine lobster with a small amount of Hellman's mayonnaise, adds a dash of celery salt, oregano and thyme, and slaps it in a white-bread bun. Have it alone for $14 or with a Maine Root soda and chips for $16. In the last year, Luke's Lobster has opened two new locations: One in the Financial District and one at the Food Hall at the Plaza, to supplement their UWS, UES and East Village locations. 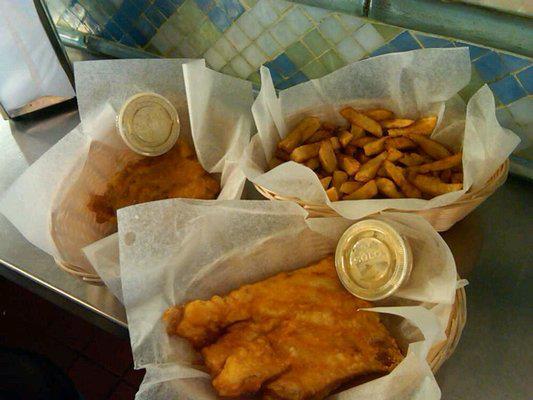 We'll be honest. This place won us over when we strolled by the Greenwich Avenue outpost and say "Whiskey" listed as the Soup of the Day. Walking into A Salt & Battery is much like walking into your average chip shop in London: a simple board posted up with the menu, very simple fried fare that will feed you and get on your way in no time at all. Chip shops are to London, then, what slice joints are to New York. A Salt & Battery does an excellent job of filling this need for a proper chip shop in the West Village and offers up British delights such as as chip butties (sandwiches filled with chips and ketchup, on buttered white bread), and various types of fried fish sandwiches -- some filled with shrimp, and even scallops. Of course, to finish your meal, you can have your choice of deep fried candy bars: Mars Bar, Toffee Crisp, or a Lion Bar. Why not?

Find Cheeky's authentic New Orleans-style sandwiches at their Chinatown outpost or at Brooklyn's Dekalb Market. Homesick Louisiana natives have said this half oyster, half shrimp sandwich is everything they could want when they're craving a taste of home. Fresh fish ingredients mixed together on a roll. The only complaints we heard from those who tried the po' boy were that it's a bit small for the price. So tasty, it leaves you wanting more.