Disappointed you couldn't score tickets to Super Bowl XLVIII? You can still catch the game on Sunday alongside fellow fans. Whether you're screaming for the Seahawks or betting on the Broncos, these NYC bars and restaurants are offering specials and hosting fun parties to enjoy the game no matter who takes home the trophy. By Sarah Shaker.

The newly reopened and renovated TriBeCa neighborhood staple, Dylan Prime, is inviting game-watchers to bring along 25-30 friends to enjoy a 4-course meal, served by each game "quarter," featuring a pig roast from Chef Kerry Heffernan. Dishes include Buffalo style pig tails, Antipasti salad, Charred Brussels Sprouts and team themed desserts to dine on while sipping beer and watching the game in either of their new private dining rooms with 55" flat screen TVs for $150 per person. 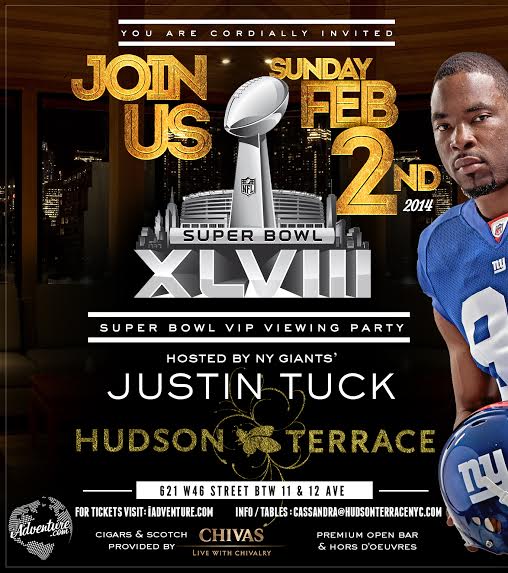 Join NY Giant Justin Tuck as he hosts Hudson Terrace's official Super Bowl viewing party. With two ticket options, a general and VIP, guests can enjoy an evening of premium open bar, game day appetizers, cigars in the outdoor lounge and scotch, provided by Chivas, while watching the big game from one of the many HDTVs.

More: How To Throw A Party For The Big Game

Thirsty for a liquid tailgate? W Times Square and W Downtown will be offering a unique cocktail menu inspired by traditional tailgating foods from January 27 – February 2. Imbibe on specialty cocktails including Jalapeno Popper Margarita, Barbecue Bloody Mary, Buffalo Cocktail and Bourbon Sweet Tea. For die-hard football fans without tickets to the game, W Times Square, W New York and W Downtown will be offering private Skyboxes for groups of up to 25 on Sunday, February 2. For $350 per person (+ tax and tip) you'll enjoy an Exclusive W 'Skybox' for you and your friends, Projection Screen with an HD view of the game, 5 Hour Open Bar (5:30 PM – 10:30 PM) and Tailgate-Inspired Bites.

Head to the East Village for Evelyn's 2nd Annual Super Bowl party, co-hosted by the colorful "impresario and cooker of delicious food," Sam Rio. Doors open early at 4:30pm, so you can stake your claim on good seats, order a drink and prepare to indulge in another of Sam's Super Bowl feasts. Your ticket will include food and a drink special as you watch the game and half-time performance and you'll be entered into a raffle for some boozy treats. Post-game you can get your groove on to a DJ spinning all vinyl 45s to dance the rest of the night away.

Warren 77, the inviting Tribeca sports bar, will celebrate Super Bowl XLVIII with a special package available for parties of 6-8 people, featuring a reserved booth for the group and unlimited snacks including chicken fingers, calamari, rings, nachos, Warren wings & fries, a sandwich or entrée of their choice, unlimited beer on tap and shots for every touchdown their team scores. And a bottle of Veuve Cliquot 2004 Vintage will be awarded to groups rooting for the winning team. This very VIP package is offered at $1500 for parties of 8, with an extra $150 for each additional guest.

Watch the game at Stella 34 Trattoria in Macy's for a sophisticated all-inclusive Super Bowl Party, complete with sweeping views of Super Bowl Boulevard and the Empire State Building. Enjoy an Italian-inspired football feast, including arancini rice balls, fried calamari, authentic Neapolitan pizza and a spread of piccoli piatti (Italian small plate appetizers) as well as a selection of modern cocktails, craft beers and Italian wines. The event begins at 6pm until the end of the game and costs $80.00 per person for unlimited food and drink. And if you can't wait until February 2 for all of the excitement, the restaurant will host an NFL-themed Aperitivo Happy Hour from January 21 – February 2, 4:30pm – 6:30pm, including two local beers from the participating teams' cities on draft or bottle, Stella 34 Poppers and football-shaped house made "Ho Hos" (chocolate cake & vanilla cream swirl treats).

On Super Bowl Sunday, Chef David Craine will prepare exclusive off-the-menu offerings that put a sophisticated spin on typical game day snacks. Viewers can watch the big game on two big screens at the bar and enjoy a selection that includes Deviled Egg Croquettes, Serrano Pepper Poppers With Smoked Gouda and Chorizo, Skirt Steak Sliders With Cucumber and Kimchee, and so much more.

Whiskey Park will be offering 6-foot heroes from the best sandwich vendors from around NYC, so you can tailgate in all five boroughs. Representing Manhattan is Faiccos with Prosciuttto and Fresh mozzarella with roasted peppers. Brooklyn's famous Zitos will bring Roast beef with horseradish. From Staten Island's Goodfellas, you can enjoy Grilled Chicken with roasted peppers, lettuce and zucchini. Bronx's Tinos Deli of Arthur Avenue is represented with an Italian hero with Mortadella, Salami, Provolone, Roasted peppers, lettuce, tomato, oil and vinegar, oregano. Queens' Brothers brings their Eggplant with fresh mozzarella, tomato, toasted peppers and lettuce. Indulge on a sandwich trio of your choice and a side salad for $15. Super Bowl-themed cocktails, will include tasty treats like the Pigskin (house-infused bacon bourbon, maple syrup, orange bitters).

Cheer for your Super Bowl team in the most gluttonous way possible - with "rival" burgers. On January 19th, ESquared Hospitality will conceptualize two unique burger creations that pay homage to the teams in the running, complete with locally-inspired ingredients and a variety of signature side dishes and milkshakes to complement. Pictured is the indulgent "Seahawks" Burger.