The double-decker, open-topped sightseeing buses -- one operated by Gray Line, the other by City Sights -- hit each other at around 3:35 p.m. at 47th and Seventh Avenue, CBS 2's Matt Kozar reported.

The accident took place right next to the TKTS discount tickets booth in one of the busiest areas of Times Square, which was packed with pedestrians at the time.

A total of 14 people were injured in the crash, FDNY EMS Deputy Chief John Wieland said at the scene. Three of the injured were reported to be in serious, but stable, condition.

The injured people included a tour guide on one of the buses, officials said. The tour guide was thrown under the dashboard. Her injuries we considered among the most severe.

No one other than the drivers was on either of the buses at the time. Contrary to earlier reports, the drivers were not injured, and they stayed at the scene during the investigation.

The other 11 injured people were on the ground, 1010 WINS' Al Jones reported.

Martin Meredith's young daughter, Lila, was among the injured.

"The lamp post supports fell on her and crushed her, and pushed in her stroller," said Meredith, of Brisbane. Australia.

The injured patients were treated at the scene and then taken to Mount Sinai-Roosevelt Hospital and Bellevue Hospital Center, Wieland said.

"Everybody was stable. Everybody's going to recover from this. Thank God that nobody was really badly hurt," Wieland said.

As CBS 2's Dave Carlin reported, the buses knocked down the lamp post and it came crashing down along with a traffic signal. The buses also struck a granite bench.

Surveillance video showed the traffic signal coming down on the east side of the TKTS booth.

"We believe that the traffic light did most of the injuries to the people standing in the area, and some of the flying debris from the light and from the buses," said FDNY Deputy Chief Roger Sakowich.

The area was crowded with people who had nowhere to run.

"It happened so fast that like, it's not like we could run away from here, because we're all kind of like, trapped," one woman said at the scene. "I don't know if the people that were, like, sitting there ended up being OK."

Ace Guzman was standing on the corner at the time.

"Boom!" Guzman said dramatically. "It was a real loud noise – real loud – and then you could hear everybody screaming and crying and of course checking, you know, grabbing their kids and stuff. It was really nuts. It was nuts out there."

One man said he saw a woman unconscious at the scene.

"She was lying down right next to the front entrance of the bus, and she was on the ground right near the part -- the bus was crashed," he said.

Witnesses at the scene told CBS 2's Kozar it sounded like a bomb went off when the buses collided. Australian tourist Shirley Nicholls said people on the sidewalk were in terrible pain.

"There was a girl with brown hair, about early 20s, and she was very disorientated; a mother holding a baby, and the baby was crying. There was a pram that was on the ground that was all squashed," Nicholls said. "People were very upset." 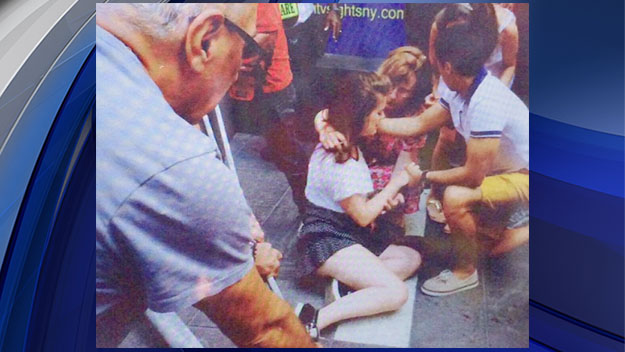 "The bus was right there and the pole was coming down, and the people were scrambling – that's about it," witness Edward Miller added. "It sounded like a terrorist attack. It was loud enough that everybody was running. Everybody was running for cover."

Following the accident, pieces of plastic littered the ground, and the lamp post lay in pieces.

"It was the debris – it was just being thrown everywhere. And we just, I mean, I just hope that everybody that was sitting there, because there was a bench in that area where the lamp post had fallen down," said witness Teresa Hui. "So I mean, I hope that everybody that was sitting there ended up getting out OK, because otherwise that would have totally crushed all of them."

"Our thoughts and prayers are with the injured, and we are cooperating with the authorities," said Twin America spokesman David Chien.

The buses had been hauled away by the nighttime hours. No tickets or criminal charges had been issued.