NEW YORK (CBSNewYork) -- Friday morning could be the beginning of the end of the "Occupy Wall Street" demonstration.

On Thursday, Brookfield Office Management employees were passing out notices to protesters, who have been camped out for 26 days, saying that tarps, sleeping bags and tents are all prohibited in the park, as is lying on the ground and on benches when it becomes an interference for others.

CBS 2 learned late Thursday night the protestors are preparing in case they cannot base their operations out of Zuccotti Park anymore. They are now encouraging people to occupy Tompkins Square Park in the East Village.

"They might as well as just said 'You're done,'" one protester told CBS 2's Ann Mercogliano earlier Thursday.

"This is an eviction notice," said another.

In relentless solidarity, members of Occupy Wall Street marched to City Hall delivering thousands of petitions to stop Mayor Michael Bloomberg from plowing through Zuccotti with the NYPD and a clean-up crew Friday morning.

WCBS 880's Rich Lamb With Ray Kelly: Protesters Won't Get To Bring Their Gear Back Into The Park

In response to the new regulations, Occupy Wall Street called for supporters to come to Zuccotti Park at 6 a.m. on Friday to "defend the occupation from eviction." In a statement on their website, the group also encouraged supporters to call 311 and demand that the mayor "support our right to assemble and to not interfere with #OWS."

That statement also went on to say that if Mayor Bloomberg really cared about sanitation at the park, "he should support the installation of portopans and dumpsters."

The notification followed Wednesday night's announcement by the mayor's office that protesters need to leave the park on Friday so it can get cleaned up.

"The last three weeks have created unsanitary conditions and considerable wear and tear on the park," said the mayor's office.

Protestors have been diligently cleaning up the park with soapy brooms, and piling up trash on the curb. Nevertheless, Bloomberg outlined a 12-hour plan to scrub down the park starting at 7 a.m.

The cleaning operation is set to take place in three stages, each lasting about four hours. Protesters will have to move from portions of the park that are being cleaned. Although the protesters can return to the cleaned areas of the park, they have to abide by the rules. And those strict rules distributed Thursday seem to suggest a showdown with the NYPD may be imminent.

Legal experts said the city will be breaking the law if they bring in the cops to clear the park without a court order.

"They would be breaching the law.  They would be violating those folks who they would seek to remove and possibly arrest, their fundamental rights to utilize the park and to express their opinions and exercise their First Amendment rights," Yetta Kurland, with the National Lawyers Guild, told CBS 2's Hazel Sanchez.

Thursday night, several city leaders also spoke out in support of the occupation.

"It's up to the mayor and everybody at City Hall to change course. To sit down with the people of Occupy Wall Street and find a peaceful way forward," said Public Advocate Bill DeBlasio.

"This is the beginning of a movement and you know what, you may not want to hear this, but this is how revolutions start," said Councilman Charles Barron.

Bloomberg visited the park Wednesday night. He was greeted by a mix of cheers and jeers. His office says that after the park is sanitized, the protesters are welcome to return.

Some folks opposed to the Occupy Wall Street movement have taken to calling them the "Flea Party," mocking their makeshift camp and ad-hoc cleanup crews.

Some protesters say they've gone to great lengths to keep the park clean.

"I think the mayor and some of his 'clonies' are trying to use tactics to get us to move out of the park," one demonstrator told 1010 WINS' John Montone.

"There's a lot of stuff we wouldn't have to clean up if the city provided basic human rights, like a Port-A-Potty," said demonstrator Gene Wagner. "If you would've given us a Port-A-Potty 30 days ago, we would've maintained it ourselves."

"Every day, all day, we clean up the park," Max Hodes told CBS 2's Dave Carlin.

"This is a protest; it's not a camping area. People aren't camping here, they're protesting and we have the right to have sleeping bags.  Where are they gonna sleep? How are they gonna protest?  Without sleeping bags, they can't protest," one demonstrator told 1010 WINS' Stan Brooks. 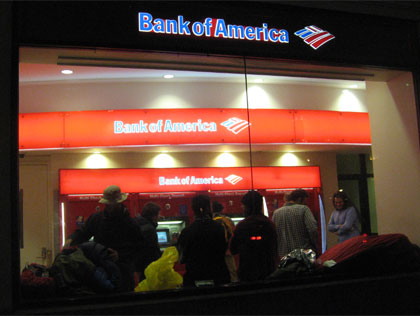 Some protesters who found themselves caught in rain squalls Thursday morning took shelter in a Bank of America ATM kiosk to stay dry.

WINS' John Montone asked a protester if there was anything ironic about that.

"We're using them like they use us," was the reply he got.

They also got a boost from musician Tom Morello of Rage Against The Machine. Morello put on a performance at Zuccotti Park on Thursday.

While the mayor has said the park will be cleaned Friday, the protesters don't seem to be making any plans on going anywhere. They've planned a "Family Sleep Over" in the park, set to start at 4 p.m. Friday.

What's more, the weekend looks as though it may be a busy one for the demonstrators. According to their website, they're planning a "Mass March on the Banks" followed by a plan to "Occupy Times Square" at 5 p.m. Saturday.

According to the site, the function in Times Square will be a party "in the festive sense of the word." At 6:30 p.m. Saturday, there's an event planned called "Occupy the Subway," but no details on that have been made available.

All of those planned events meant little to some nearby businesses. Mike Keane, owner of nearby O'Hara's Pub, told CBS 2's Carlin demonstrators use his bathrooms and disrupt his business.

"I really hope this circus moves on. I've had my fill of these people," Keane said.

He said the clean-up plan is not enough.

"Somebody's going to wind up getting killed and maybe then someone will say let's get them out of here. Hopefully it doesn't take that," Keane said.

Tell us your thoughts about the Occupy Wall Street movement in our comments section below.