NEW YORK (CBSNewYork) – A United States Postal Service mailman in Manhattan, who once was a firefighter in South Korea, is retiring.

Now, Isoo Choi wants to share what he's learned along the way.

For the last 20 years, he's carried mail for the USPS. Before the South Korean immigrant retires at the end of the month, there's one last message he wants to deliver: Open your heart to others and listen.

"It is like a school, this earth, we are learning," he said.

The Rockland County man has commuted to the Upper East Side for more than a decade. Just the other day, he slipped a farewell note to residents on East 88th Street, explaining he's retiring and he wanted to thank them for helping him live the American Dream.

"Before I come to this country, I didn't know about the people we have and the different backgrounds," he said. 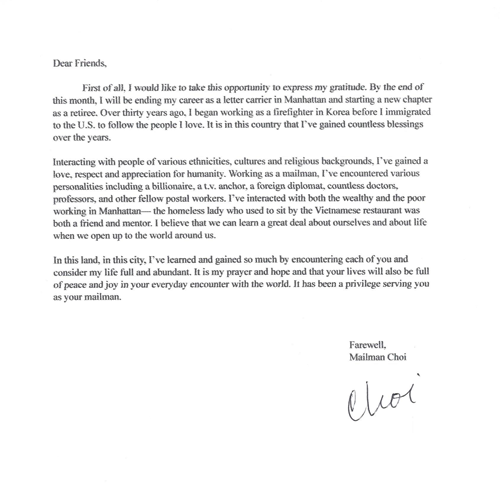 The popular mailman has made friends with most of the block.

"I miss him already, because he's just a really pleasant person," a woman added.

"Interacting with people of various ethnicities... cultures and religious backgrounds, I've gained a love… respect and appreciation for humanity," they read.

It struck a chord with Evelyn Vogel.

"Everybody deserves a chance, and he took the chance and he succeeded," she said.

Choi also wrote, "I've interacted with both the wealthy and the poor working in Manhattan… I believe that we can learn a great deal about ourselves and about life when we open up to the world around us."