Kellie Pickler has long been a supporter of the U.S. troops, and now she has 'revealed' her support even further. Kellie is featured on the cover of this month's Maxim magazine, as well as in a photo feature inside, posing in a vintage-styled bikini.

The magazine headline calls the feature her "sexy tribute to the troops."

In the photo gallery inside, Kellie is featured in a few different outfits and shown posing with men in uniform. 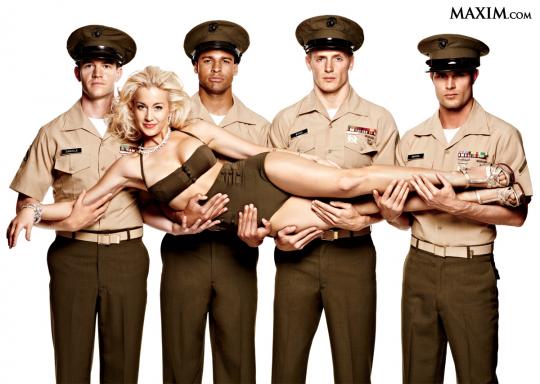 There's also an interview, in which she talks about her longtime support of the U.S. military.

"I come from a military family," she tells Maxim. "My grandfather is a retired Marine, and I’ve always had a great deal of respect for anyone who serves our country."

Kellie often plays for the troops at home and abroad, and recently completed her fifth USO tour.

See the Kellie Pickler gallery on Maxim.com. The special "Salute To the Military" issue of Maxim will be available on newsstands on July 31.