Tom Izzo is headed to his seventh Final Four. Only three coaches have been to more: John Wooden, Dean Smith, and Izzo’s opposition on Saturday, Mike Krzyzewski. Izzo’s NCAA Tournament success makes it hard to be truly surprised when Michigan State makes it this far. But if there were ever a year for astonishment, this is it.

Of Izzo’s seven Final Four teams, this year’s was ranked the lowest in the preseason and heading into the Tournament, had three more losses than any other team and two more Big Ten losses, and received the worst seed. Not to mention the key players Michigan State lost from last season.

“I’d like to tell you I thought five different times this year we were good enough to get to a Final Four, but I’d be lying to you,” Izzo said after beating Louisville on Sunday in the regional final. “I just wasn’t sure we had enough size, enough talent in certain areas…I wasn’t really planning on working this late, but, God, I love to work at this time of year.”

Michigan State was as low as a 5 seed during two of its previous Final Four runs. But those teams’ journeys were more predictable, at least in hindsight, than this one’s. The 2010 team that lost to Butler got to play a 9 seed and a 6 seed in the regional rounds, making its path easier. The 2005 team returned all of its key players from the previous year. Those are some of the reasons Izzo said this was his most improbable Final Four team. 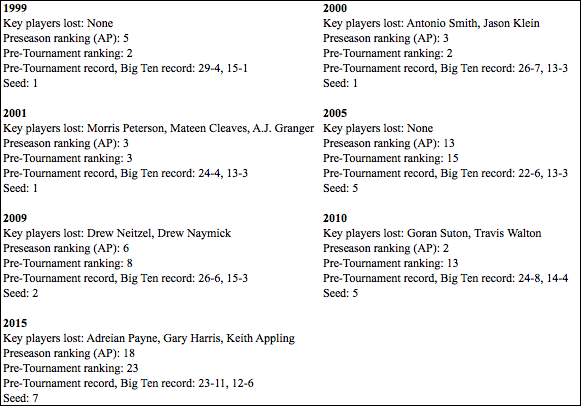 Since about the midway point of the season, Izzo has been reminding people that Michigan State has lost a lot of close games, often due to poor foul shooting. The Spartans were 2-5 in overtime games before beating Louisville in overtime. Their foul shooting ranks 338th in the country out of 351. In other words, they may not have been as bad as their record suggested.

They beat Purdue and Indiana to close out the regular season and then beat Ohio State and Maryland in the Big Ten Tournament before losing in overtime to Wisconsin in the title game. All of those teams made the NCAA Tournament. “We went into the tournament with a lot of confidence,” Izzo said in Monday’s press conference in Indianapolis. “Probably in early February is when I said, ‘This team has a chance to make a run.’ Did I think it would be this deep a run? No, I can’t say I did. But I’m very proud. They even surprised me a little bit.”

He’s not the only one.

Andrew Kahn is a regular contributor to CBS Local who also writes for Newsday and The Wall Street Journal. He writes about college basketball and other sports at AndrewJKahn.com. Email him at andrewjkahn@gmail.com and follow him on Twitter at @AndrewKahn.