Plenty of music fans harbor hopes of attending the GRAMMYs and taking in all the excitement of the industry’s biggest annual awards show. But to truly experience the glitz and glamour of the evening you might be better served attending the official after party. Held for the past several years at the Los Angeles Convention Center, the extravaganza is largely the work of Along Came Mary, an L.A.-based event production and gourmet catering company that over the course of its more than three decades in operation has coordinated festivities for hundreds of major events, from movie premiers to the Emmys to the MTV Movie Awards.

According to company founder and head Mary Micucci, the evening is centered around a rotating theme, conceived by Branden Chapman, Executive in Charge of Production and Chief Business Development Officer for the Recording Academy. Past themes have run the gamut from Tokyo Nights to Woodstock to Carnivale. This year’s premise is Bollywood, and Along Came Mary went all-out to craft a fully immersive experience. “The idea is to have people walk into the convention center and feel like they are walking into an Indian cinematic extravaganza,” says Micucci. “They should be immediately electrified by the whole experience.” 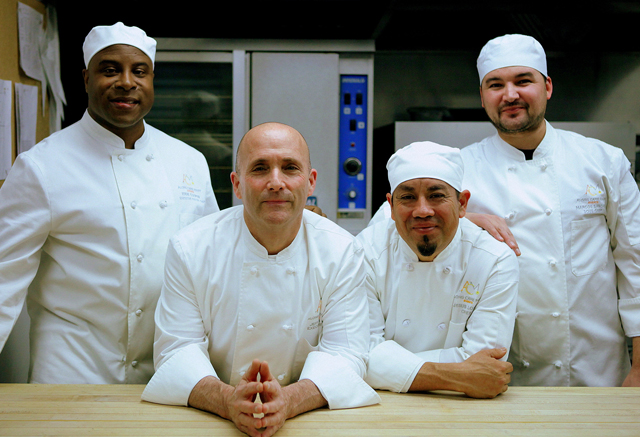 This is achieved through months of preparation and design, with painstaking attention paid to every detail, from linens to lighting to design, which will transform the large space—the size of three football fields—into a lavish Indian cinematic world, replete with dancers, acrobats and musical acts. There is also, of course, food—and plenty of it. More than 60 buffet locations will dot the convention center, offering a wide variety of authentic Indian cuisine and beyond.

“We created a menu that is a mixture of southern and northern Indian cuisines,” says Jeffrey Perlman, Director of Catering and Executive Chef for Along Came Mary. “We have a curry house and a tandoori station. Then we have a something we call Across the Indian Ocean, where we pull in cuisine from other parts of the region — Malaysian baby back ribs, an island stir fry from Singapore, a Thai noodle dish, south China wontons. We tried to be conscientious to pick things that are descriptive of the various locales.”

For those partygoers that are less gastronomically adventurous, there will also be more familiar options from which to choose. “We’re going to have a farm-to-table area that focuses on food and products from Northern California,” Perlman continues, “as well as a station that presents several of the signature dishes that Along Came Mary has become known for, like braised brisket with dried fruit compote and truffle macaroni and cheese.”

If, somehow, attendees still find room for dessert, they can sample, among other offerings, Madras chocolate toffee bread pudding, salted caramel budino, Bombay kulfi and Indian coconut cups filled with chai jasmine rice pudding and garnished with caramelized pineapple. “Our pastry chef, Eddie Cooper, spent a lot of time on the dessert menu,” Micucci says. “And he came up with some really amazing creations.”

Hopefully, Micucci and her hard working team will get a chance to enjoy a few of those creations themselves at the party. But she doesn’t count on it. “The day of the event is like shooting a movie, or opening night at the theater,” she says. “It’s non-stop. I’m able to maybe walk around later in the evening and sit down and taste some of the food. But it’s not until we’ve all recuperated for a couple days afterward that we’re really able to look at everything that happened. But overall the event is such a rewarding experience. It’s a creative adventure, and we’re excited and very honored to be a part of it every year.”