Getting into New York City is more than just a commute –it's a lifestyle. New Yorkers spend an average of 48 minutes going to work, according to the Partnership for New York City, which is 13 minutes above the national average. But with all the congestion, the rush and the traffic (oh, the traffic!), we sometimes forget that it's the beautiful journey – not the destination – that could make our commute in a little less painful. So pick your head up from your newspaper or iPad, and here's what you may come across as you travel into work each day.  By Samantha Lazarus Bennet.

More: NYC Public Transportation Is More Than Just A Commute

Live north of the city in Westchester, Putnam or Dutchess County? The commute may be long, but the almost non-stop views of the Hudson River along the way make this train ride a scenic oasis for mountain lovers. If you're traveling into the city and facing towards the front of the train, make sure your sit on the right side for an unobstructed view of the Hudson River and cliff faces. You'll be right along the river until you get into the Bronx, near the Riverdale and Spuyten Duyvil stops (11 miles from GCT). Live in the city and need a taste of the mountains? This is the rail line to take if you're looking for the start of great hiking trails (and even links on to the Appalachian Trail) right from the tracks - no car necessary.

Anyone who has sat on a NJ Transit bus knows that the view from the helix of the Lincoln Tunnel is the reward for enduring possibly one of the most aggravating commutes in America. The picturesque view of Midtown from across the river is beautiful any time of day, in any kind of weather. And if you're stuck in traffic on the helix, you can enjoy the view for longer than the 20-30 seconds you'll normally see it, so let's call that the silver lining. But the worse news? Commuters have been losing part of the unique panoramic view of Manhattan thanks to luxury apartment construction.

Although a little pricey, taking the ferry into the city is one of the most fun, easy and scenic commutes you'll come across. It's a refreshing way to experience a commute with some extra wiggle room (most days) and the wind in your hair as you float across the Hudson and into Pier 11 or the World Financial Center. If the gorgeous and up-close view of the West Village or Financial District aren't good enough, turn around and enjoy the view of the historic Lackawana Railroad and Ferry Terminal, originally built in 1907 and added to the list of National Register of Historic Places in 1973.

We've all been there before - you get on the platform just in time to see the train you've sprinted for chug away. So what do you do with that extra time until the next one comes? We'll if you're at the Long Beach railroad stop on the LIRR, you go to the beach. A five-mile pristine stretch of sand is just an easy 10 minute walk from the train station. There's also a historic boardwalk that's perfect for a quick stroll before you head back to the station. Made plans to go to the beach from the city? Make sure to pick up LIRR discounted tickets that includes round-trip rail fare and admission to the beach (some areas of the beach are private) for $21.00. 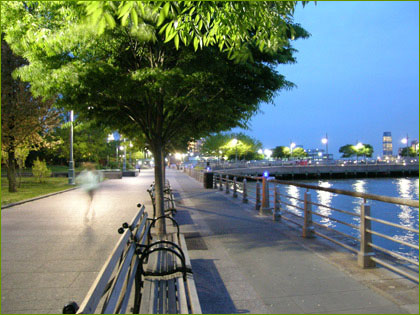 Why drive and sit in traffic when you can bike to work? Take advantage of the beautiful bike paths in the city by commuting in from NJ via the George Washington Bridge. DOT has made it easier for bicyclists to now get from the George Washington Bridge to the Hudson River greenway bike path. Standard bike route signage has been installed, with suggestions to follow along the pedestrian bridge north of 181st Street/Lafayette Plaza. Exercise and no toll? That's a win-win.