If you’re not only ranking players, but also grouping them in tiers, tight ends are an interesting test case. Jimmy Graham is a one-man tier, with Gronkowski and Julius Thomas, both potential second-round picks, in the next group. It gets interesting and a bit unpredictable after that, which is why mock drafts will help you determine when you can get your preferred target.

1. Jimmy Graham, New Orleans Saints
2013 Stats: 86 receptions, 1,215 yards, 16 TD
Is he even a tight end? Graham, for contract purposes, argued he should be classified as a wide receiver. While an arbitrator ruled against him, Graham had a very strong case. As far as fantasy owners are concerned, Graham produces like an elite wide receiver, easily making him the most valuable at his designated position.

2. Rob Gronkowski, New England Patriots
2013 Stats: 39 receptions, 592 yards, 4 TD
Coming off yet another surgery—this one for the torn ACL and MCL he suffered in Week 14—Gronk comes with some risk. But he’s also a touchdown machine playing in an offense with limited pass-catching weapons. 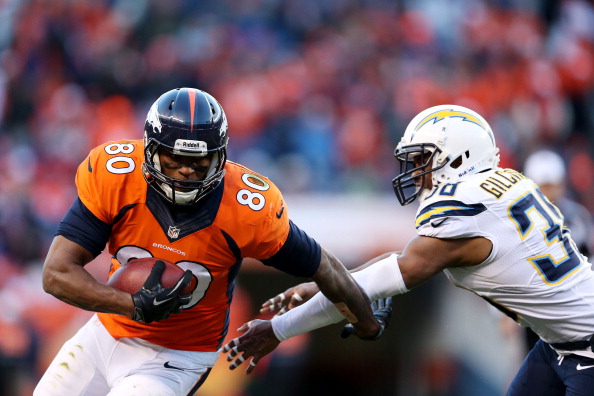 Julius Thomas #80 of the Denver Broncos tries to avoid the tackle of Marcus Gilchrist #38 of the San Diego Chargers during the AFC Divisional Playoff Game at Sports Authority Field at Mile High on January 12, 2014 in Denver, Colorado. (Photo by Christian Petersen/Getty Images) 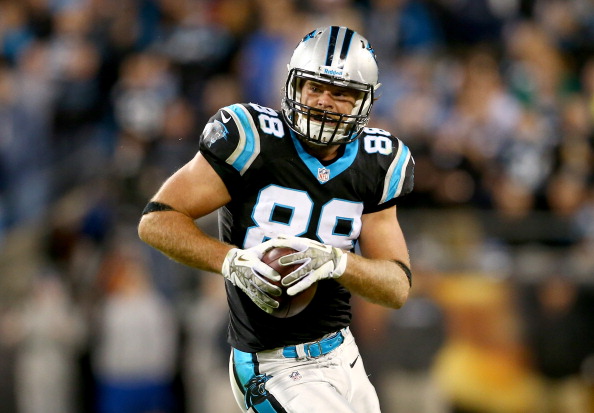 Greg Olsen #88 of the Carolina Panthers during their game at Bank of America Stadium on November 18, 2013 in Charlotte, North Carolina. (Photo by Streeter Lecka/Getty Images)

5. Greg Olsen, Carolina Panthers
2013 Stats: 73 receptions, 816 yards, 6 TD
Steady and reliable, Olsen should continue to thrive as one of Cam Newton’s few familiar targets. He won’t carry your fantasy team, but he won’t disappoint either.

6. Jordan Cameron, Cleveland Browns
2013 Stats: 80 receptions, 917 yards, 7 TD
This may be a lower ranking than you’d expect for Cameron, but who will be throwing him the ball? Cameron fell off after a hot start to last season, so while he remains a strong fantasy play, he isn’t a stud yet.

7. Kyle Rudolph, Minnesota Vikings
2013 Stats: 30 receptions, 313 yards, 3 TD
Rudolph, on the other hand, could be a pleasant surprise. Minnesota’s quarterback situation is still a bit murky, but with a new coach, Norv Turner, who has a history of coaching quality tight ends, there’s reason to believe Rudolph can crack 10 scores. 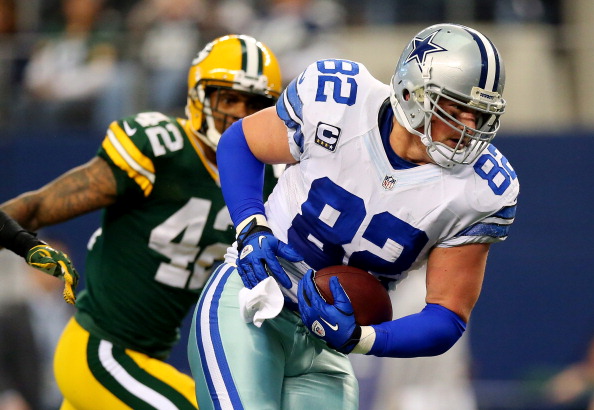 Tight end Jason Witten #82 of the Dallas Cowboys catches a touchdown in the first quarter against the Green Bay Packers during a game at AT&T Stadium on December 15, 2013 in Arlington, Texas. (Photo by Ronald Martinez/Getty Images)

8. Jason Witten, Dallas Cowboys
2013 Stats: 73 receptions, 851 yards, 8 TD
Witten has been a model of consistency, finishing in the top six at his position since 2010. By no means should he still be considered among the elite tight ends, but he’s safely in that second tier.

9. Dennis Pitta, Baltimore Ravens
2013 Stats: 20 receptions, 169 yards, 1 TD
He figures to be a big part of Baltimore’s passing attack, especially if he’s back to full health after a hip injury cost him of most of last season.

10. Jordan Reed, Washington Redskins
2013 Stats: 45 receptions, 499 yards, 3 TD
Reports out of Washington indicate new head coach Jay Gruden likes Reed and will use him to create mismatches in the passing game. He could be in for a breakout sophomore season.