LARCHMONT, N.Y. (CBSNewYork) -- It was a very sad day for everyone at CBS 2 Tuesday, as we said goodbye to a faithful husband, father, friend and journalist.

Hundreds gathered Tuesday at Saints John and Paul Church in Larchmont to pay their respects as CBS 2's John Slattery was laid to rest.

A New York news icon, John died suddenly from an apparent heart attack Thursday at his home in Westchester County. 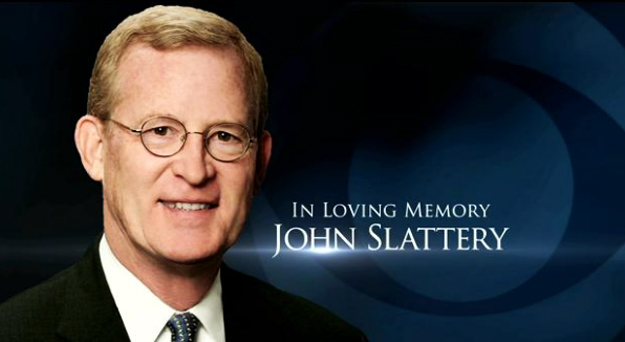 He is survived by his wife, Suzy, their three children and three grandchildren. He was 63.

As CBS 2's Tony Aiello reported, a weight of sorrow was shouldered by some of John's closest friends for a funeral that filled his parish church to capacity.

John's voice often filled the church, where he served as a lector. At his funeral, the first reading – from the Book of Proverbs – could not have been more fitting.

Monsignor Thomas Petrillo pointed out that John did not dabble in his Catholic faith, but lived it daily. He felt particularly blessed by the sacrament of marriage.

"Yes, God permitted John to meet Suzy, the bride he would love more and more with each passing day of their marriage," Petrillo said.

Their union lasted more than 40 years.

"She is heartbroken," said friend Kathy Staudt. "She's lost her best friend, but she will go on and she - she's a rock."

The service featured Slattery's favorite hymns, and ended with a eulogy from his son, Patrick.

Patrick Slattery joked about inheriting his father's looks, but not his way with words.

"My dad would be blown away by the kindness support and love everyone has shown over the last few days," Patrick said. "He would not have believed it, and would have said it must have been a slow news day."

Patrick Slattery spoke of his father's quirky habits and irreverent sense of humor, calling him an "enormous ham" who loved his annual turn on stage for the Inner Circle Show – a parody group mad up of New York City reporters.

"It was just an outpouring of love and joy, and just the brilliance of being on the stage, and moving, and making people happy," said Shelly Strickler of the Inner Circle Show.

And in addition to being devoted to his family, to his faith, John was also dedicated to the highest standards of his craft.

"New York is at a loss now because he told stories for our viewers," said CBS 2 Vice President of News David Friend. "And he was their eyes; he was their ears; he was their advocate -- and a piece of that is now missing."

For more than 30 years on New York television, you could count on John Slattery to set the scene for you, to report the news.

Covering the five boroughs and the Tri-State Area for WCBS-TV since 1984, from the start, John reported on the biggest stories, including subway vigilante Bernie Goetz.

A four-time Emmy winner, he didn't let go of stories that touched him deeply. Year after year, John reported on the missing boy Etan Patz.

John was on the scene of countless tragedies. On Sept. 11, 2001, he was one of the first reporters to arrive on the chaotic and terrifying scene, having witnessed the second plane strike the World Trade Center while emergency vehicles were still trying to make their way to the disaster.

He was steady, plainspoken and unflappable.

He was an observer who wasn't afraid to tell it like it is. He wrote about world and religious leaders, and covered politicians, perpetrators and regular people of all walks of life.

"We are saddened by the unexpected passing of our friend and colleague John Slattery," Peter Dunn, president of CBS Television Stations, said in a statement last week. "During his nearly 30-year career at WCBS, he was great at reporting the news and was someone we counted on to cover big stories for us, both here in New York and around the world. Our thoughts and prayers are with John's wife, Suzie, and their children and grandchildren.

"John had been with us since October 1984, so he was just days away from celebrating his 30th anniversary at WCBS," Dunn added. "We were truly blessed to have him as a member of our CBS 2 news team and we will miss him dearly."