NEW YORK (CBS 2/1010 WINS/WCBS 880) -- On a day that would have been the 100th birthday of Mother Teresa, New Yorkers both remembered her life and voiced their displeasure for the Empire State Building's decision to refuse a request to honor her with a lighting display.

But some find the reasoning incomprehensible and on Thursday night protested along 34th Street to voice their unhappiness by chanting "turn on the lights."

"I just thought it was sort of petty and mean spirited that someone as good as Mother Teresa, they couldn't turn the lights on for...when they do it for so many other people," one woman told 1010 WINS' Al Jones.

"Show a little respect to people like Mother Teresa, who went out of her way," another woman said.

"Really...it's not a big deal to light the lights...it's her 100th birthday," said another protester.

At Saint Patrick's Cathedral Thursday, Archbishop Dolan presided over a mass in honor of Mother Teresa.

"It's tough to be against Mother Teresa," Dolan said.

CBS 2's Don Dahler reported that hundreds of worshipers were in the pews, including a dozen nuns from the Sisters of Charity, the order founded by Mother Teresa in 1950 in Calcutta, India.

Courtney Teitler said Mother Teresa was "someone who embodied everything everyone should strive to be."

And Maria Colon echoed those sentiments, saying "No matter how much you have, how many material things, it's what you do for mankind."

But at the protests Thursday night, Catholic League President Bill Donahue continued to express his continuing frustrations with the ownership of the Empire State Building.

"If we Catholics took this like a piñata, a doormat, then the cultural elites will say we can do what we like to Catholics," Donahue said. "This goes beyond Mother Teresa at this point."

"We were outraged," protester Fran DiBlasio said. "And it's not a Catholic thing although we're Catholic.  She was universal."

But it wasn't all confrontation across the city, as Times Square was illuminated in blue and white lights as an answer to the protest, and in Astoria an interfaith gathering presided over by Christian, Jewish and Muslim clerics honored the Catholic nun.

"You know what? We took adversity, as Mother Teresa would, and made something positive out of it," NYC Councilman Peter Vallone of Queens said.

Still, Archbishop Dolan said that Mother Teresa might be overwhelmed and unhappy with some of the attention surround the lighting controversy.

"She was humility personified. She didn't like a lot of attention. She ran from it. She shied away from it," Dolan said. 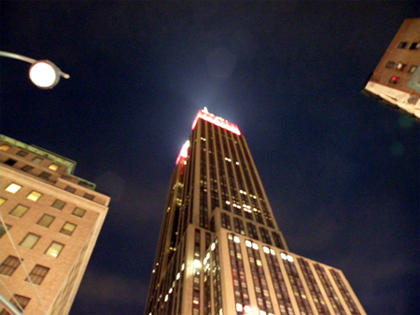 While the Empire State Building has gone green for Saint Patrick's Day, red for the 60th anniversary of the Chinese cultural revolution and even pink for the release of a Mariah Carey album - it didn't turn blue and white in honor of Mother Teresa Thursday.

Brooklyn Borough President Marty Markowitz said he's not afraid to come out in support of Mother Teresa. In Brooklyn, he said, they'll get it right.

For the next six nights, Brooklyn Borough Hall will be illuminated in blue and white — the colors of Mother Teresa's habit and sari — to pay tribute to the Nobel Peace Prize winner, who spent many years ministering to orphans and the poor in India.