NEW YORK (CBSNewYork) -- From residency to racism and crime to your commute, the top Democratic contenders in the New York City mayoral race tackled it all in their final debate before New Yorkers can start casting their votes.

The five candidates were invited to participate based on their standing in the polls and small money donations from New Yorkers. 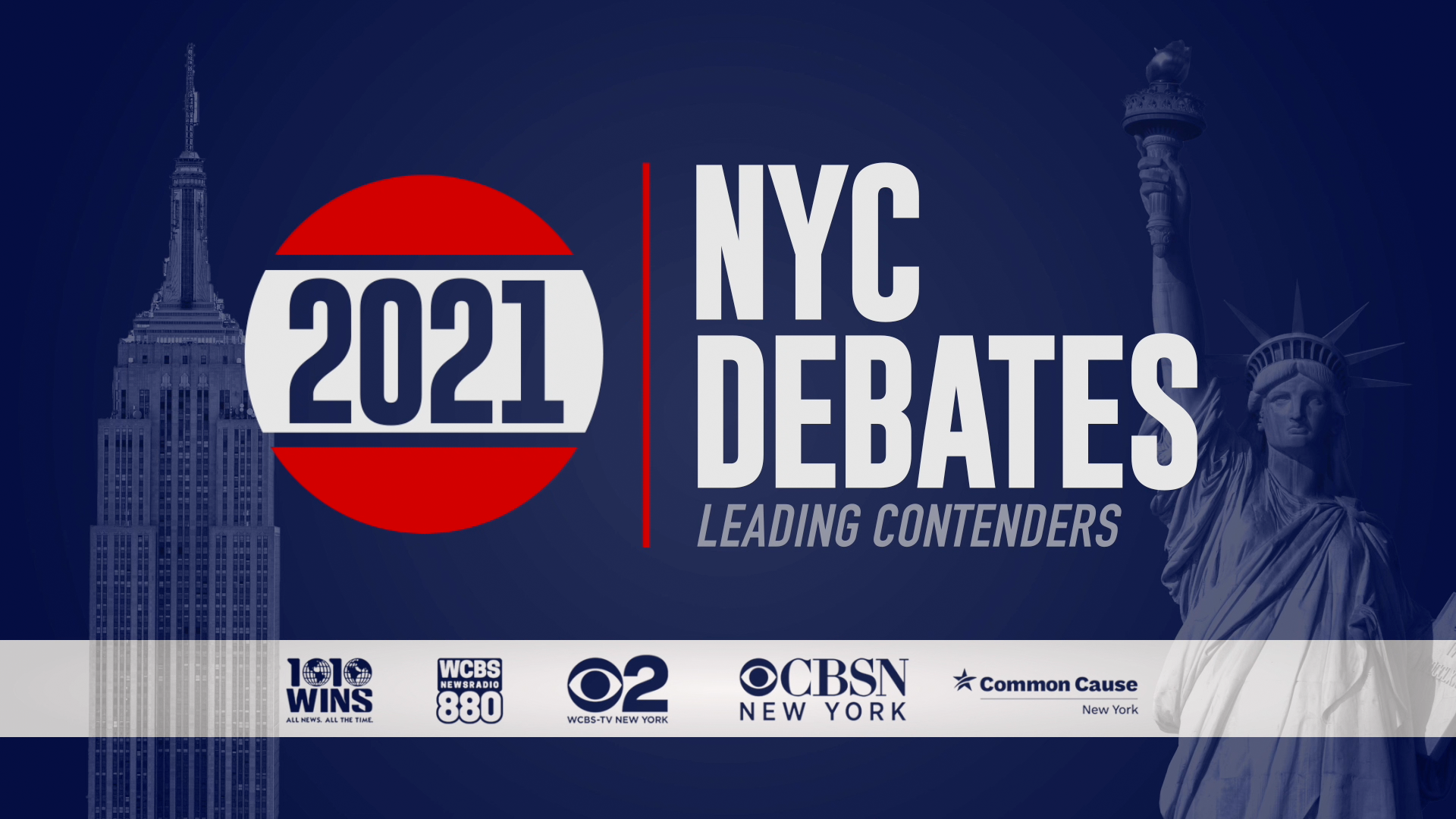 The biggest loser in the debate was not a mayoral wannabe, but a man who actually held the job for two terms, but the five men and women who want to be the next occupant of Gracie Mansion certainly didn't escape unscathed.

The question was simple -- how come former cop Eric Adams hasn't been able, as borough president, to control the high rate of gun crime in Brooklyn?

"People are going to look at you and they're gonna say, 'How can you make us feel safe if you couldn't stop it in your own backyard?'" Kramer asked.

"I don't concur with that. The mayor of the city of New York controls his police department," Adams said.

But that didn't stop others attending CBS2's leading contenders debate from piling on. After all, Adams is currently leading in the polls and crime is one of the top concerns.

"Eric's campaign seems to go like this -- 'You're concerned about crime, I used to be a cop 20 years ago, I should be mayor,'" Yang said. "It's unclear exactly what Eric's approach to our safety would be and this is his core issue, and like you just said, Marcia, shootings are up over 100% in Brooklyn."

"I don't know where Andrew has been until a shooting happened down the block from his house," Adams said.

Wiley, who has based her campaign on attacking the NYPD and demanding they be defunded, refused to say she would take away guns from most cops like they do in 19 other countries.

"I'm not going to take guns away from the police. They are confronted with people who are criminals who have guns, and that is why my focus is making sure that we get guns out of the hands of criminals so we don't lose any more children," Garcia said.

"We're not taking guns away from the police. We're gonna make sure that we create a police force that focuses on rooting out violent crime, but at the same time ensures the civil rights of our young people, especially in our Black and brown communities," Stringer said.

"No, we're not. It's imperative that we have police that are properly trained," Adams said.

He went on to say, "It's not about carrying the gun, it's knowing how to have the proper training that you don't harm innocent people and you don't harm yourself."

"Of course not. The police need to be equipped to fight crime in any circumstance, and if anything, we need to go on a massive recruitment drive for new police officers," Yang said.

Meanwhile, Stringer attacked Wiley helping Mayor Bill de Blasio craft a strategy to hide potential conflicts of interest with outside consultants by calling them "agents of the city."

"I just want to say to Maya, you were front and center in two corruption scandals in City Hall," Stringer said.

Adams was also under attack from recent reports questioning where he lives.

The first question posed to the candidates was, "Do you believe Mr. Adams lives in New York City?"

Yang stated he finds the incident troubling, accusing Adams of not being straightforward and being hypocritical.

Wiley said the voters want honesty and a candidate who is forthcoming, and Garcia said New Yorkers want a transparent mayor who can deliver on promises.

Both Wiley and Stringer stated they don't believe New Yorkers care about where someone lives.

"They want to know what you do when you get up in the morning," Stringer said.

When given the chance to response, Adams said he agreed with Stringer.

"Let's be clear. If you're on the ground, you know what people are asking about," he said.

Adams did again state that he lives in Bedford-Stuyvesant, Brooklyn.

With the city opening up again, a key question: should congestion pricing be postponed until the city gets back on its feet?

"It should be [enacted] right now because part of what we need to do with that money is put it into our subway systems to make sure that they're continuing to run and operate," Wiley said.

"We have to be mindful of our city's recovery. Right now, 80% of Midtown commercial real estate buildings are still empty, so we have to accelerate the recovery by any means necessary," Yang said. "I would be flexible on the timing of adopting congestion pricing in line with the city's return of commuters."

The person who fared the worst in the debate was former Mayor Rudy Giuliani. The candidates were asked what landmark they would name after him

"An anchor at the bottom of the sea," Yang said.

Another revealing moment was when the candidates were asked about the one thing they can't live without.

Garcia said a mani-pedi, but Adams may have topped her, confessing to needing hot bubble baths with warm roses inside.

During the debate, Kramer brought up sexual harassment accusations against Stringer.

"One of your accusers says that years ago you took her bar to bar and groped her when she was 18. Another accuser says you were drinking when you groped her without her permission. You yourself told the New York Times that in that period in the '90s was 'a bit of a mess for you.' What exactly does that mean, and if the allegations are true, should you be held accountable for your actions?" she asked.

Stringer says he was misquoted in the article.

"The mess I was talking about was the bar business, not in any way diminishing..." Stringer said.

"But it seems like you were going from bar to bar and there was drinking involved and the question is did that impair your ability?" Kramer said.

"Thirty years ago, I cannot tell you exactly where those allegations come from, but I can tell you, and I mean this, if there's in any way I've made anyone in my entire life uncomfortable, I certainly apologize for that, but that quote was a misquote and it was unfortunate that the quote wasn't right," Stringer said.

"But should you be held accountable for those actions?" Kramer asked.

"I want to be held accountable to anyone who wishes, the press or otherwise, to investigate what took place 30 years ago and 20 years ago. Unfortunately, in the middle of the campaign, it has been a struggle to find a way to communicate that. Now it's up to the voters to look at my 30-year record of service and personal history and make a decision as to who's best qualified for mayor, and I think New Yorkers will know my record and where I stand," Stringer said.

Wiley responded to his comments, saying, "It is not just about discomfort. That is not what we're hearing. But also it takes two to view any sexual conduct as welcome."

Candidates were also asked, "We live in a time when we have New Yorkers just walking down the street getting sucker-punched because of their ethnicity, people getting pushed onto subway tracks, and a case we all saw last weekend, an innocent little boy getting shot and killed because of a dispute between two grown men. How do you change this culture of violence and just straight-out ugliness?"

Garcia cited mental illness and homelessness as contributing factors to the culture, citing a need for supportive housing for the homeless and police and mental health professionals to engage upfront to prevent crime from happening.

Stringer and Adams both said they would start by investing in children with things like child care, after-school care and early childhood intervention.

Adams also brought up investing in the foster care system, bringing up the number of children who age out without any support.

Yang specifically spoke about Alexander Wright, who is accused of sucker-punching an Asian woman in Chinatown. In the past year, Wright was arrested eight times for arson and assault, and he pled guilty to two other violent crimes just days before the attack.

Yang said the city needs to address why Wright was out on the street, bringing up bail laws and mental health services.

"Justin Wallace is not dead because we don't have enough police officers. He is dead because we have never in this city done the very thing that communities ... have been asking us for, which is trauma-informed care in our schools," Wiley said.

The topical of discussion then turned to Gov. Andrew Cuomo as the candidates were asked, "If you get elected, what will you do to ensure that you have a good working relationship with [Cuomo]?"

"I get along with everyone," Adams said, adding he would put his ego to the side and sit down with the governor about not having public disputes and being on Team New York.

Wiley cited her past experience working with the governor's office while serving in the senior cabinet of City Hall, and Garcia also added that she had worked successfully with people at the state level.

Yang said he had had a number of calls with both the governor and the governor's brother at CNN.

Stringer, who brought up his past as a state Assemblyman when answering the question, criticized Yang's approach.

"Your approach is naïve. This is not how Albany works. Albany will go after you. Albany will collapse you if you don't understand that the forces around the state do not want us to get the funding that we deserve," Stringer said. "It is not enough to say we're all gonna be friends, kumbaya. We need a mayor with experience who knows the legislative process."

"The state needs the city, Scott, and the city needs the state. The two do go hand-in-hand. And it's easier to work with someone who again isn't trying to score political points and is just trying to get the job done," Yang said.

All five candidates did agree on two issues -- regulations to protect non-smokers from secondhand marijuana smoke and changing the names of streets, buildings and schools named for slaveholders.

None of the candidates said they support requiring license plates on bicycles in an effort to catch cyclists who disobey traffic laws.