According to Kiplinger, New York City is the single most expensive city in the United States to live in. Fittingly, the Big Apple will play host to the most expensive Super Bowl of the past six years. At an average price of $4,084.37, tickets for Super Bowl XLVIII have risen 18.43% since the January 6th price of $3,448.79. In addition to New York prices, this has had a lot to do with the respective teams that will be playing in XLVIII. With Denver and Seattle conquering New England and San Francisco to advance to the big game, demand for Super Bowl tickets is sky high for two fan bases that are hungry for a championship.

Over the course of the regular season, only the Chicago Bears had higher average ticket prices than the Seahawks and Broncos, which shows the level of enthusiasm for their team's this season. While they have a combined distance of over 4,600 miles to travel, early indications are that they're up for the trip. Aside from New York and New Jersey, Washington has been the state most frequently visiting TiqIQ's Super Bowl page over the past few weeks.

The below graphic compares average and get-in prices for the past six Super Bowls as of the Sunday night during which the matchup was determined. Not only does Super Bowl XLVIII have the highest average price of any Super Bowl since TiqIQ began tracking the market, but it is second only to Super Bowl XLV in terms of most expensive get-in price. MetLife Stadium is also the second biggest Super Bowl venue over the last five years, behind AT&T. Typically, a larger ticket supply will lead to lower prices, but so far that has not been the case for Super Bowl XLVIII.

For Seahawks and Broncos fans looking to make practical use of TiqIQ's seating data to budget their trip and secure Super Bowl tickets, the average sales price (not to be confused with list price) for tickets thus far has been $3,632.15. The cheapest ticket currently available for $1,985 is located in Upper Endzone Corner Section 348. For fans who want to be a little closer to the action, the lowest priced Mezzanine seat is located in Section 226, and is currently listed at $2,929. For just a slight premium, you can secure a ticket in Section 149 of the Lower Level at a price of $2,980. 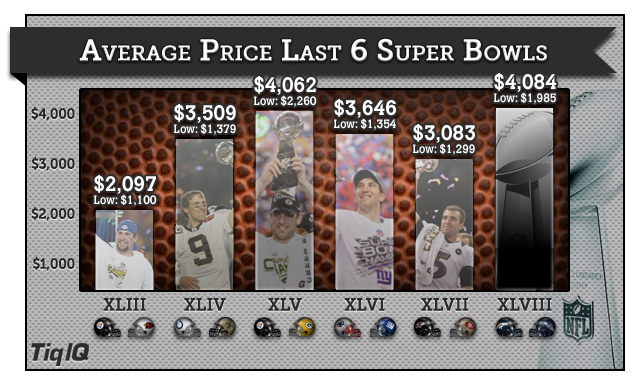 Of course some fans and corporate entities will treat this Super Bowl as they have treated all others, maybe even with some added New York flair—go big or go home. The most expensive single seat at MetLife is located in Lower Club 113, right at midfield. This ticket currently carries a price tag of $29,900. But that's only the tip of the iceberg. If you can get together 30 friends all willing to justify that price point, the premier suite currently on the market can be yours for a price of $1,019,000. For a discount of 43.6%, you can secure the least expensive suite on the market, which checks in at a price of $575,000. Needless to say, this will be an expensive Super Bowl any way you slice it. And to think, the NFL dropped prices on the least expensive face value tickets from $600 to $500 this year. Unfortunately for Seahawks and Broncos fans, the primary market discount will not be passed on to secondary market consumers.