NEW YORK (WFAN) – Monday was the day for fans to try and lift the maloik off the winless New York Giants.

Big Blue hasn't gotten it done yet, suffering six straight losses to start the season. WFAN co-hosts Boomer Esiason and Craig Carton hoped to rally the boys to their first win Monday night against the Minnesota Vikings with some help from a sacrificial pig (75 pounds of roasted goodness), an exorcist, hundreds of rabid Giants fans, special guests galore and much, much more.

"We've dedicated and sacrificed a 75-pound pig to the sports gods here today, and we'll each spank that pig on the way into the stadium so that we can bring the Giants good luck," Carton said.

The event featured live music, buses, RVs, free food, etc. It was the tailgate of the year Monday at MetLife Stadium.

"It's gonna be off the charts," Carton said.

The party started at 4 p.m. at the stadium's inner loop roadway between lots E and F. Tune in to WFAN 660-AM and 101.9-FM for a special edition of the Boomer & Carton show, which began at 6:30 p.m. Photos and video will be posted after the event on BoomerAndCarton.com, WFAN.com and CBSNewYork.com. 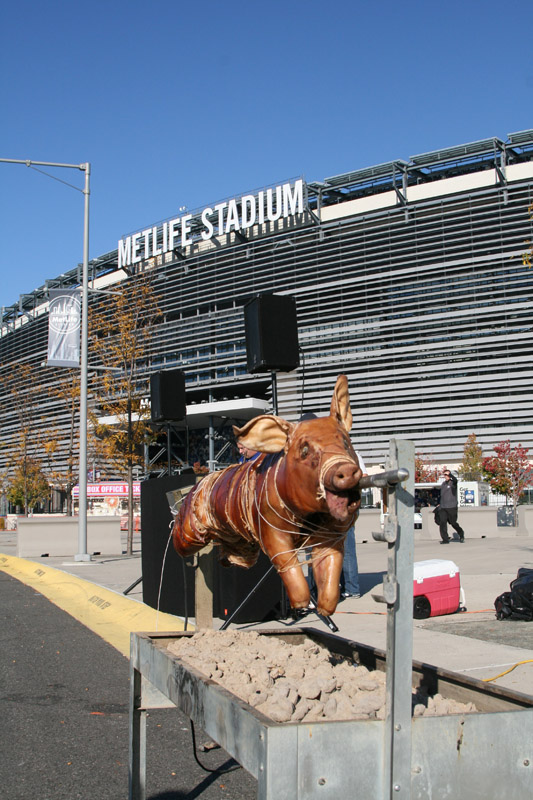 Boomer and Carton picked the pig's name out of a hat at 8:30 a.m. Monday. The first winner, Eli Hamming, was declared a no-go by Craigie.

A second name was selected around 9 a.m. Ladies and gentlemen, say helloooooo to The Notorious P-I-G, aka Piggie Smalls:

Another key cog to lifting the maloik: Chris George, the self-proclaimed "Godfather Of Psychic Mediums," who offered his services to spiritually cleanse the Giants (0-6) ahead of their matchup with Minnesota.

"They still have a chance for the playoffs, right?" a fan said with a laugh.

Jim from Middletown was one of the few Minnesota Vikings fans who turned out. He admitted no one had anything to brag about in the matchup, as the Vikings are only 1-4.

Lock it up. Carton believes tonight's the night for the G-Men.

"They're gonna wax the Minnesota Vikings up and down," he said.