BLOOMINGTON, Ind. (CBSNewYork/AP) -- As the search for missing Westchester County native Lauren Spierer continues, her parents said Thursday they're not giving up.

Since releasing a photo of a white truck seen where the Indiana University college student disappeared, Bloomington police say about 300 tips have come in.

Bloomingdale Capt. Joe Qualters said investigators didn't know whether the truck had any role in Spierer's disappearance and that it was too soon to know whether any of the tips were credible.

"At this time, the investigators continue to track down that information in hopes that it might lead to a lead in itself," Capt. Qualters said. 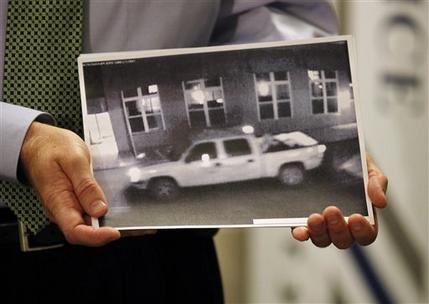 Capt. Joe Qualters of the Bloomington Police department displays a photo of a vehicle seen in the area taken by a video surveillance camera on the night Lauren Spierer disappeared during a news conference in Bloomington, Ind., Wednesday, June 15, 2011. (AP Photo/Michael Conroy)

"It's an ongoing effort to track down those leads,'' he added. "We're hopeful that there's some valuable information that comes from that.''

This Saturday, America's Most Wanted will again be running a segment on Spierer.

Dozens of volunteers have been signing up to look for Lauren, including the mother-daughter team of Jo and Erica Cunningham.

"I used to walk from work a lot, and hearing about her, it's just very strange to think of someone your age gone," Erica, 20, said.

As the two-week mark approaches since the 20-year-old went missing, Spierer's father Robert said he and his wife are not giving up hope.

"We don't know when we're leaving," he said. "We have no plans to leave. We get through it with the help of everyone that comes in touch with us, including the people in this room."

Spierer's mother, Charlene, seemed to address college students as she stood before a bank of television cameras during a Thursday news conference.

"This could be you going out on a night with your friends, to just have a good time and be happy and share your life with everybody,'' she said. "I'm begging you to put yourself in Lauren's place. What would you want your friends to do for you?''

Please offer your thoughts in the comments section below.