NEW YORK (CBSNewYork) -- A married father of two is in a coma after he was punched in the face while riding his bike in Brooklyn earlier this month, police said.

Surveillance video obtained exclusively by CBS2 shows what looks to be an unprovoked, random attack on 38-year-old Domingo Tapia in Bedford-Stuyvesant.

The video shows Tapia riding his bike across Albany Avenue on Fulton Street just before 1:30 a.m. back on June 8 when the suspect crosses his path, and punches him in the face, CBS2's Reena Roy reported.

The suspect and his friend casually walk away as Tapia falls to the ground, slamming his head on the concrete, Roy reported.

Witnesses made their way to the victim's side and called 911 as they noticed him lying on the street corner, not moving.

Police say he was rushed in an ambulance to Kings County Hospital where he is in critical condition, unconscious with severe head trauma.

Tapia's wife told Roy he was going into surgery Friday night for the second time in a week.

No matter how hard Esther Diaz tries, her husband of 13 years is unresponsive. She said she tried to ask him what happened, but he has yet to wake up and explain. Their children, just five and seven years old, are left wondering where their father has been.

She said her husband means everything to her and her children.

The NYPD has released three surveillance images of the suspect. 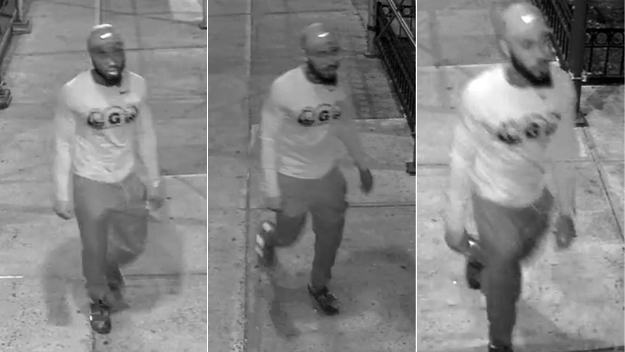 Police describe him as a black man in his mid-20s with an athletic build and a beard. He was last seen wearing sweatpants, sandals, a Nike baseball cap and a long sleeve shirt with the letter "G" on the front.

Sarah, a family friend, said Tapia is from Mexico, works at a fruit stand and gets around by bike. She said his wife is distraught and has been spending every moment she can with him in the hospital. Sarah said one of the children's schools is taking up a collection to help the family.

"I think he was the breadwinner, so there's no income now," Sarah said.

Kimberly Bido, who works at a nearby deli, said the suspect comes into the store often. She told Roy she's been working in the area for over a decade and has never seen anything like this.

"For no reason getting attacked like that nobody deserves that," Bido said. "Hearing something like that is devastating and I can only imagine how hurt his family is feeling."

"They look like a good family. He always picks them up from school, it's sad," said Luis Reyes, who also knows the family.

The public can also submit their tips by logging onto the Crime Stoppers website or by texting their tips to 274637 (CRIMES) then enter TIP577. All calls are strictly confidential.