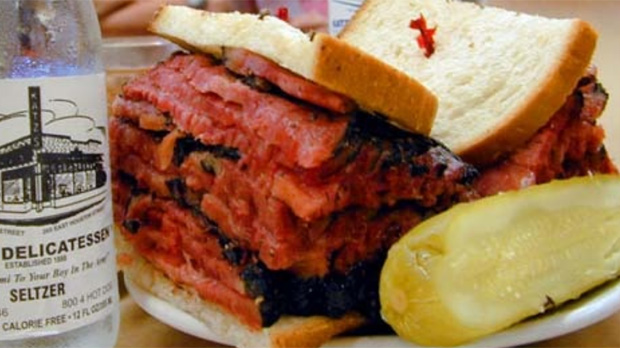 Who hasn't been served a couple slices of rye holding pale, tasteless tomatoes, what looks to be six inches of equally pale lunch meat and a perfunctory swab of mustard? The heart sinks at this purely utilitarian assembly. But New York has a knack for its Jewish delis and its denizens are loyal to the ones they love; it's an important relationship. Start yours here. – Anna Van Lenten

The pastrami and corn beef here are tender, moist, salty-right. If you're a real fresser, get the pastrami with chopped liver! The pickles are great, as is the potato salad. If you've never had matzoh ball soup, try it here and see what all the fuss is about. If you're in the mood, the hush puppies are super tasty.

Check your flesh at the door, where a sign warns, "No shorts or short sleeves allowed," then surrender to the extremely perfect pastrami, which also comes in the form of an eggroll and knish. Chicken liver plates are sumptuous, the mushroom and barley soup generous and filling. Be adventurous and order a small plate of chulent (beef, barley, potatoes, onions, and beans all mixed up) with a bowl of the wonderful chicken soup.

Two must-haves at this New York institution: Corned beef sandwich on rye (fresh pickl-ish meat, fresh rye bread, mustard and mayo)-simple and delicious. And pastrami: the best pastrami this side of heaven: salty, smoky, spicy, beef-y. Everything else pales in comparison, though die-hards insist on a plate of pickles to accompany things. Katz's also preserves an important, all-too-rare deli tradition: they cut your meat by hand, giving it a chunkiness you just can't get from a machine.

If there's a brain center for a Reuben sandwish—then Sarge's would hit all its spots: salt, fat, vinegar, cream, cheese, garlic, and beef. The pastrami is outstanding and the matzoh ball soup delicately excellent. Pickles (briny & garlic), classic cole slaw, and a slice of fluffy Challah bread with a giant scoop of chopped liver should be accompanied by cholesterol meds.