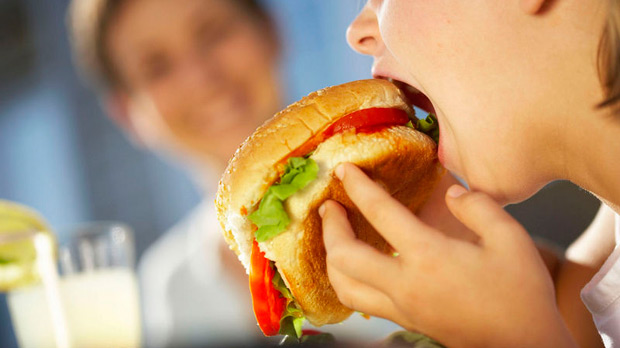 What is it about ground beef, heat, and a bun that produces such alchemy? Few foods are as a perfect at satisfying a simple, deep craving. The burger: we salute you. Here is a list of where to get some of the best in town.
- By Jesse Zanger

Since it opened in 1999, Waldy Malouf's Beacon Restaurant has gained a reputation as one of the top spots for a burger in town. The restaurant offers two tasty lunch deals - you can dine either at the bar, where you can get a a burger and two drinks for $20, or at the tight "burger bar" in the rear of the restaurant, in front of an open kitchen. There you can get a delicious Black Angus patty served on a soft onion roll with grilled red onions, tomato and garlic fries for $15.

This hole-in-the-wall isn't much by way of decor (it has only 10 seats), but it has one of the best delivery burgers in the city. Why? Because it is pretty much identical to what most people would make at home, if they could: a classic back-yard burger. Plump, round, big-as-your-fist, juicy burgers that are cooked perfectly. The fries and rings are very disappointing, but the juicy burger is excellent. If you're looking for delivery in Midtown, it's a winner.

Get ready for a massive meat bonanza. The Palm is a classic American steakhouse - it opened on 2nd Avenue in 1926, and has since franchised out across the country. The Bozzi Burger, named for one of the Italian immigrants who founded the restaurant, is a huge monster of a meal. It usually has a terrific, faint coating of char that adds a certain, delightful mmph to the flavor. Once you bite into it, get ready for a flood of juices. Afterward, you won't need to eat for about a week - that is, if you finish it.

Though it only opened in August, 2008 by partners Jason Hennig and Francis Ennis, foodie blogs across the city are abuzz about Black Iron. While many writers decry the place's apparent lack of air conditioning (or proper ventilation: some complain they reek of burger and fries after a visit), they love the salty, juicy goodness they serve within.

It would be impossible to do a round-up of the best burgers in NYC without including the triumphant Burger Joint. At or near the top of almost everyone's "Best Burger" list, everything about this down-to-Earth place (in the midst of a highfalutin' hotel) just works. Lines can be extremely long, especially in the middle of lunch hour, but if you can get one of the tables in this small, square reproduction of your college bar, sit down and enjoy pitchers of brew and perfectly prepared, fresh and flavorful burgers. The fries and shakes are no joke either. One last point: unlike many of the burgers on this list, the Burger Joint burger isn't too big. It is a small, delightful portion.

This West Village institution, which touts itself as one of the last bohemian bars in the area, is well known for the burger that lurks within its small, dark confines. It's a low-key neighborhood bar that has retained its classic charm in the midst of a fast-changing, high-priced neighborhood. That said, it can get quite busy. The Bistro Burger is pretty cheap - now clocking in at a whopping $6.75 - and is juicy and delicious. Do yourself a favor if you go, though: don't bother waiting for a cramped table in the back. Gently elbow your way to the bar, take a seat, and get your burger there while slurping down McSorley's Dark for a mere $2.50 a glass.

Reviewers lavish praise on Dononvan's, some calling it the best burger in the city. It is a huge, pub-style burger, lauded for its juiciness and perfect preparation. Chase it with a delicious pint of Guinness, enjoy the thick-cut steak fries, and you're in for a great experience.

Locations in Manhattan and Queens
www.fivenapkinburger.com

The 5 Napkin Burger started out as an item on the menu of Nice Matin, an Upper West Side restaurant. It proved so popular the owners broke it out into its own restaurant franchise. The burger itself is dripping with juices (hence a "five napkin burger"). It is a bit sweeter than most burgers on this list, and is topped with gruyere cheese, onions and a rosemary aioli. The Hell's Kitchen location is frequently packed. If all else fails, you can still get it at the place it was born, Nice Matin.

Upper East Side stalwart J.G. Melon has been producing wonderful, juicy burgers since it opened in 1972. There's a lot of things about the place that work: it's unpretentious bar atmosphere, the dining room in the back. The round cottage-fried potatoes are also a treat, perhaps a bit too easy to keep popping down. Good thing the portion size - both of the burger and the fries - isn't too large.

What is there not to love about Peter Luger's steakhouse? Arguably the best in steakhouse in town also makes a serious burger, naturally. However, it is only available at lunch. It's over a half a pound of delicious meat - what else would you expect from such a lauded institution? It is an open debate, however, whether it is worth getting the burger after going through the effort to get to the foot of the Williamsburg Bridge. After all, if you've gone that far, you may as well get their peerless porterhouse steak (not too mention the unreal bacon appetizer). But burger-lovers will hear the call of the Luger's burger and sample it to their great delight. It crumbles into a medium-rare mass of meat.

In some ways, the Clarke's burger is a definitional patty. It's not too big, slim and very choice. There's a slice of raw onion tucked underneath the bun, like a buried treasure waiting for your to add it to your patty (or not). The Clarke's burger is so popular, and so well respected, that they now have four satellite locations throughout the city. The original on 3rd Avenue, though, is the classic locale, retaining its historic 19th-century charm. Not everyone will appreciate this, but for the men out there, it may have the best urinal in the city.

Set in the shadow of St. Patrick's Cathedral, the Prime Burger is a throwback to an era of diners and "greasy spoons" that have mostly been priced out of the city. It feels a bit like a coffee shop. The Prime Burger has a lunch special that will particularly appeal to burger-lovers: the Prime Burger deluxe ($10.95, $11.95 with cheese). The deluxe comes with two burgers and fries, so you better be hungry, or willing to share. While the meat of the burger is no great shakes, the key is the relish, which when slathered on gives them extra juice and a hint of sweet, red pepper.

Much has been made of Danny Meyer's Shake Shack. It burst onto the scene in Madison Square Park in 2004 and became an instant sensation. Lines at the park can be very long, especially during lunch, and those same lines can also be found at their satellite locations. The Shake Shack burger is essentially New York's answer to the legendary West Coast institution In 'N Out, which much to many a burger-loving New Yorker's chagrin does not franchise here. The Shake Shack provides a high-end, fresh variant of the "fast food" burger type.

Not enough can be said about perhaps the most underrated, high-profile burger in town. Some purists swear it is the best burger there is. There's an excellent combination of crunchy char and rich flavor with a marvelous "close-to-the-bone" note. The atmosphere at Wollensky's Grill is raucous, filled with the after-work business crowd, and the hospitality of the hosts there, who make an effort to get to know you and treat you well, is also part of the experience.