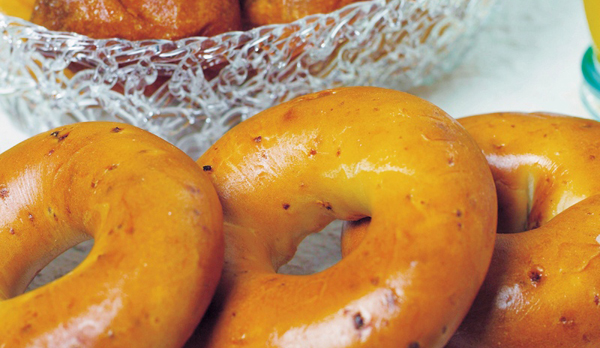 No food item is more "New York" than the bagel. We took on the tedious task of ranking the city's best. Here are the 6 best bagel stores in New York City. By Valerie Stivers.

This is a superb example of a typical kind of New York deli. There's a high-silver-topped counter holding loaves of cold cuts, saran-wrapped pasta salads, tubs of flavored cream cheese and cupcakes the size of space-ships. The fry-up guy moves at the speed of light on the grill. It's open 24 hours, delivers, and the everything bagel is chewy, garlicky, onion-y perfection.

This undistinguished deli in strollerville (no spreads, no toasting) still has many adoring fans for its large, fluffy, square-ish hunks of dough.

A trek out to the boroughs to try a reputedly superior ethnic product is another New York rite of passage. The Bagel Oasis, since 1961 is Queen's cult bagelry, an easy detour off the LIE. It's open 24 hours a day seven days a week, and serves deli sandwiches, spreads, et al.

It's rare that there's a near-consensus in any category, but Ess-a-Bagel is hands-down considered to have the best bagel in NYC. They're enormous, tough-skinned, dense almost to the point of breadiness and have a malty kick. Ess-a-Bagel also provides a bustling, colorful deli experience with great whitefish salad, spreads, pickles, rice pudding and more.

The runner-up is a no-decor storefront on the far Lower East Side with comically surly service and all the workings of bagel-making on display. The bagels are fantastic, but no trip to Kossar's would be complete without sampling that half-a-hole step-sibling, the bialy. The cream cheese is a touch on the slippery side, but goes well with the bagel.

Any weekend morning Murray's has a solid line from counter to door. These are plump, rounded, golden-topped bagels in an unsually wide variety of flavors, and both the toppings and the interior have a more gourmet feel than usual.