Yankees closer Aroldis Chapman was placed on the 10-day disabled list Sunday with what was reportedly diagnosed as a rotator cuff strain. He had evidently tried to work through discomfort in his last two outings, the combination of which caused his ERA to jump from 0.79 to 3.55. 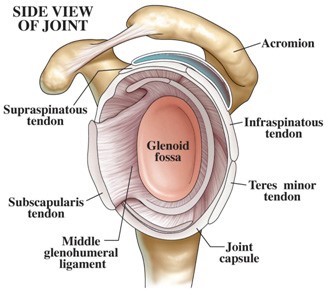 Four muscles that serve different functions essentially fuse at the shoulder to form the rotator cuff tendon. However, each inserts on a slightly different aspect of the humeral head and can be stressed in unique ways. The cuff can be especially vulnerable to injury for overhead athletes, particularly pitchers, who repetitively place extreme forces on the area. 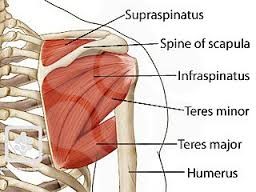 The rotator cuff muscles are the subscapularis, supraspinatus, infraspinatus and teres minor.

Because of its position directly over the top of the head of the humerus, the supraspinatus acts to raise the arm out to the side (abduction). This portion of the tendon is often subjected to wear and tear from chronic impingement (compression) in the narrow space it occupies between the acromion (a portion of bone that appears like a hood over the shoulder) and the head of the humerus (the bone of the upper arm).

Weakness of the outward rotators of the cuff – the infraspinatus and teres minor – which insert at the back of the humeral head, can contribute to impingement risk. This is because it renders them less effective at stabilizing the head of the humerus and depressing it with overhead motions. Instability at the anterior (front) aspect of the shoulder joint also contributes to impingement. The degree of the distractive forces at the shoulder in the extreme position of external rotation required during the cocking phase of pitching are what is at issue here.

If rotator cuff tendons become inflamed, swelling can further compromise the joint space, creating more impingement. Additionally, excessive demand on fatigued, weakened or inflamed tissue leads to further breakdown. Hence, working through the symptoms, as Chapman evidently attempted to do, is not helpful. Degenerative rotator cuff tears can ultimately result in complete rupture and are often associated with biceps tendon rupture as well. 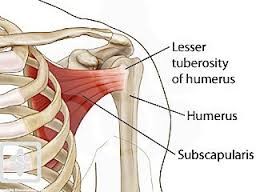 The fourth rotator cuff tendon is the subscapularis, which crosses the front of the shoulder joint. This muscle, which lies on the undersurface of the shoulder blade, is one of the internal (inward) rotators (teres major is another). Because of its position, this portion of the tendon also reinforces the anterior capsule of the shoulder, providing some restraint to the forward translation of the humeral head that occurs with outward rotation.

It is possible to strain any of the individual muscles of the rotator cuff. When strength testing these muscles in isolation, it can be determined which is involved by which resisted action results in pain. Other tests on physical exam can also be revealing, as is MRI.

Strains are graded on a scale from one to three, with a Grade 1 being a mild inflammation and a Grade 3 being a complete rupture. Even if Chapman's is only a Grade 1 strain (the likely scenario, though no specifics have been reported), he is likely to be out at least a month to six weeks – and quite possibly longer – as he works his way back to competition after a period focused on rest and rehab. The worst thing he could do is return to the mound prematurely.