NEW YORK (CBSNewYork) -- There was a stunning denunciation Thursday of Anthony Weiner's mayoral bid by none other than the scandal-fighting governor of New York, Andrew Cuomo.

As a devoted hockey player, Weiner must be saying he got checked into the boards by Gov. Cuomo, after the state's top dog put the scandal-scarred mayoral wannabe into the penalty box during an interview with the Syracuse Post-Standard's editorial board, CBS 2's Marcia Kramer reported.

Cuomo and the newspaper had the following question-and-answer session:

Post-Standard: "And if we elected him?"

Cuomo clearly had all the Albany scandals on his mind, but his comments took on added relevancy because during Weiner's first campaign stop in Harlem he was asked about calls he's made to various elected officials about his bid to replace Michael Bloomberg.

And that's not the only problem encountered by the Weiner campaign. There are charges that the ghosted city skyline on his campaign website is not New York City, but really Pittsburgh. Early Thursday evening, the skyline on that website was changed to a New York City backdrop showing the Empire State Building. 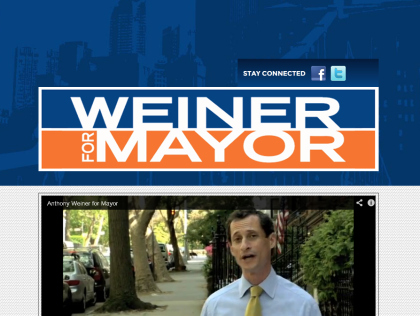 But nearly a third, 20 percent, say they're not sure who they like.

It was also clear Thursday that after two years in political purgatory for the sexting scandal that cost him his congressional seat, the old, feisty Weiner was back. He clearly wants to be seen as a serious campaigner concerned about the forgotten middle class. He has a lot of ideas about that -- 64 to be exact.

"I'm impatient. I want to get things done. I want to solve problems," Weiner said. "I make no apologies for the idea that I am a hard-driving aggressive problem solver."

Outside the subway station where he shook many hands, many people said they would vote for Weiner.

"As Christians, Jews, religious people, we all make mistakes, so we can't judge one another," one man said.

"I'm going to vote for him," another woman said. "We have to give him a chance."

Others weren't so sure.

"No way, can't trust the man," one person said. "I mean he goes on the Internet ... you want somebody like that as your mayor?"

"I think he deserves a second chance, but I wouldn't vote for him though," one man said.

The disgraced former congressman engaged residents. Many asked him a wide range of questions from police tactics, to jobs, to education and more. It was his first time stumping since his last congressional re-election race in 2010.

"Ultimately this is going to be up to the voters to decide and when the voters think about the issues they care about it, I want to be there to try to have a conversation with them," he said.

Weiner said he was encouraged that people seem to be giving him a second chance and are listening to his ideas, but added, "If citizens want to talk to me about my personal failings, that's their right and I'm going to do anything I can to answer them."

After weeks of speculation, Weiner officially launched his comeback campaign in a YouTube video late Tuesday.

"I made some big mistakes and I know I let a lot of people down, but I also learned some tough lessons," he said on the video. "I'm running for mayor because I've been fighting for the middle class and those struggling to make it my entire life. And I hope I get a second chance to work for you."

But as Weiner tries to focus his campaign on the issues, the scandal that forced him from office continues to follow him.

In an interview Thursday with WNYC-AM radio after his stop in Harlem, Weiner was asked, "Any other shoes to drop on this that maybe you want to get out yourself before somebody else does?"

When Weiner was asked how confident he was that this wouldn't happen again, he replied, "It is behind me."

Weiner resigned in June of 2011 in the wake of a Twitter scandal after lewd pictures he sent to at least six women surfaced. That prompted numerous calls from colleagues for the embattled lawmaker to step down.

He initially denied sending a salacious photo over Twitter, saying his account had been hacked. He then modified his story, calling it a prank. He eventually confessed that the photos were of him.

Weiner, who previously ran for mayor in 2005, entered the race less than four months before the Democratic primary and with a $4.8 million campaign war chest.