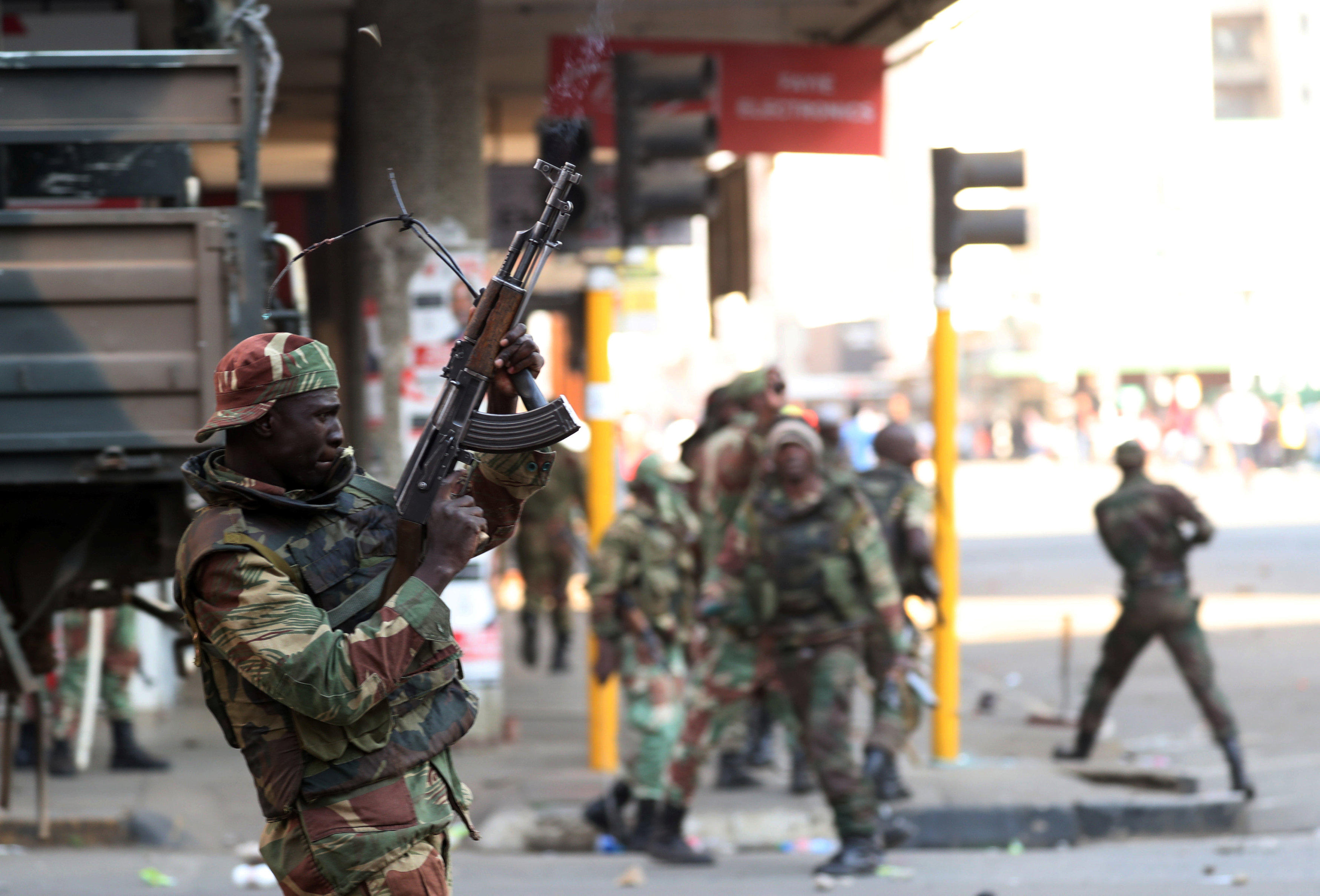 Zimbabwe soldiers and police were on the streets of Harare Thursday as authorities came under under increasing pressure to release results of the presidential election. The country's landmark vote -- the first since veteran autocrat Robert Mugabe was ousted last year -- turned bloody Wednesday when troops opened fire on demonstrations against alleged electoral fraud.

Police spokeswoman Charity Charamba said at a press conference Thursday that the toll had risen from three to six after some protesters succumbed to their injuries.

A joint statement by international election observers including the United States, the European Union, the African Union, and the United Kingdom expressed "grave concern" over the violence and urged the electoral commission to release the results "expeditiously."

"We categorically denounce the excessive use of force against unarmed civilians," the group said in a statement.

The government blamed the MDC opposition party for inciting the unrest and vowed to enforce a security crackdown, and President Emmerson Mnangagwa said he wanted an independent investigation into the killings and that he is seeking settle differences "peacefully."

The United Nations and former colonial power Britain also expressed concern over the violence, and called for "restraint."

Soldiers were on guard outside the headquarters of the ruling ZANU-PF party, while armored personnel carriers, water cannon trucks and police anti-riot vans drove through Harare sporadically pausing outside the MDC headquarters.

Downtown Harare, where protesters were killed, was quiet in the morning.

"I wasn't sure whether it's safe to come to work. We had to consult among ourselves whether it would be safe," said one worker who declined to give his name.

Elsewhere markets were open and queues formed outside banks -- a common sight in Zimbabwe due to the country's chronic shortage of banknotes.

In a late-night press conference on Wednesday, Home Affairs Minister Obert Mpofu said further protests would not be tolerated.

The MDC said the army had opened fire "for no apparent reason," killing unarmed civilians.

In official results from the parliamentary election, also held on Monday, ZANU-PF won easily -- suggesting Mnangagwa, 75, would be on course to retain the presidency.

But the MDC has said it won the elections outright and accused the government and Zimbabwe Election Commission (ZEC) of rigging the count.

ZEC said the final results of the presidential race may not be known until Saturday.

Monday's polls had been meant to turn the page on years of violence-marred elections and brutal repression of dissent after Mugabe's 37-year rule was ended by a brief military takeover in November.

But the mood quickly descended into anger as MDC supporters rallied in the city, chanting against the government and burning tyres in the streets.

Mnangagwa had promised a free and fair vote after the military ushered him to power when Mugabe was forced to resign.

A credible and peaceful vote was meant to end Zimbabwe's international isolation and draw in foreign investment to revive the shattered economy.

European Union observers declared they found an "un-level playing field and lack of trust" in the election process. It called for transparency in the release of results.

"On many occasions -- preparation, financing, media and hopefully not in the counting -- it was advantageous for the ruling party," EU chief observer Elmar Brok told the AFP news agency.

Britain called for "calm and restraint", urging "political leaders to take responsibility... at this critical moment", while Amnesty International said the "people must be guaranteed their right to protest."

Under Mugabe, elections were often marred by fraud and deadly violence.

Of 210 parliamentary seats, 207 have been counted with ZANU-PF winning 144 and the MDC Alliance just 61.

MDC leader Nelson Chamisa, 40, has said the results were fraudulent.

"We have won this one together. No amount of results manipulation will alter your will," he tweeted before the army was deployed on Wednesday.

Mugabe, 94, voted in Harare on Monday alongside his wife Grace after he stunned observers by calling for voters to reject ZANU-PF, his former party.

His attempts to position Grace as his successor are widely thought to have driven the military to intervene and install their favoured candidate, Mnangagwa, in power.

But Chamisa, a lawyer and pastor, sought to tap into the youth and urban vote.

Mnangagwa was allegedly involved in violence and intimidation during the 2008 elections when then opposition leader Morgan Tsvangirai pulled out of the run-off after attacks claimed the lives of at least 200 of his supporters.

If no presidential candidate wins at least 50 percent of the ballots cast in the first round, a run-off vote is scheduled for September 8.