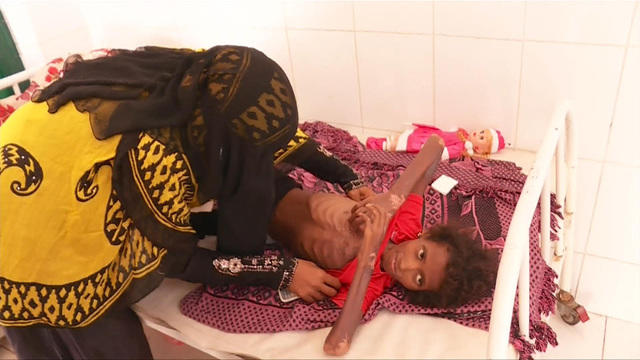 ADEN -- Four days of peace talks between Yemen's warring sides has brought talk of a prisoner swap, but an end to what the United Nations calls the "world's worst humanitarian crisis" remained out of sight on Monday.

Nearly 14 million Yemenis are at risk of starvation. CBS News' Elizabeth Palmer, the only U.S. network correspondent in Yemen, visited American NGO Mercy Corps' operation inside the war-torn country, where it is trying to relieve some of the Yemeni children's suffering.

Palmer reports that while the signs coming out of the peace talks have been encouraging, the process is going to take a long time -- leaving millions of Yemenis with no choice but to struggle on.

Even the most routine things now in the sprawling city of Aden are hard-won, including keeping kids in school.

From prisoners to pupils

It's hard to believe from what it looks like now, but just three years ago the Abbas al Husseini School in Aden was overrun by Houthi rebel fighters.

They turned it into a prison until they were pushed out.

Now the american aid organization Mercy Corps has renovated it.

More than 600 students study at the school, including some who fled the fighting further away. One of them is Riad.

Palmer asked Riad if he was aware of the peace talks going on thousands of miles away in Sweden. He smiled shyly, but shook his head.

Like most teenage boys he's got more practical things to worry about; mostly his studies.

He told Palmer he wants to be a doctor.

Help, but not nearly enough

The war has turned aid into a lifeline in Yemen.

Not far from the school, Mercy Corps is paying 70 men to install a solar-powered water pump. Their salaries from the job are all that stand between their families and hunger.

The U.N. says three of every four Yemenis need aid right now, but millions aren't getting it because of the fighting.

Those are the people who are facing real hunger this winter.