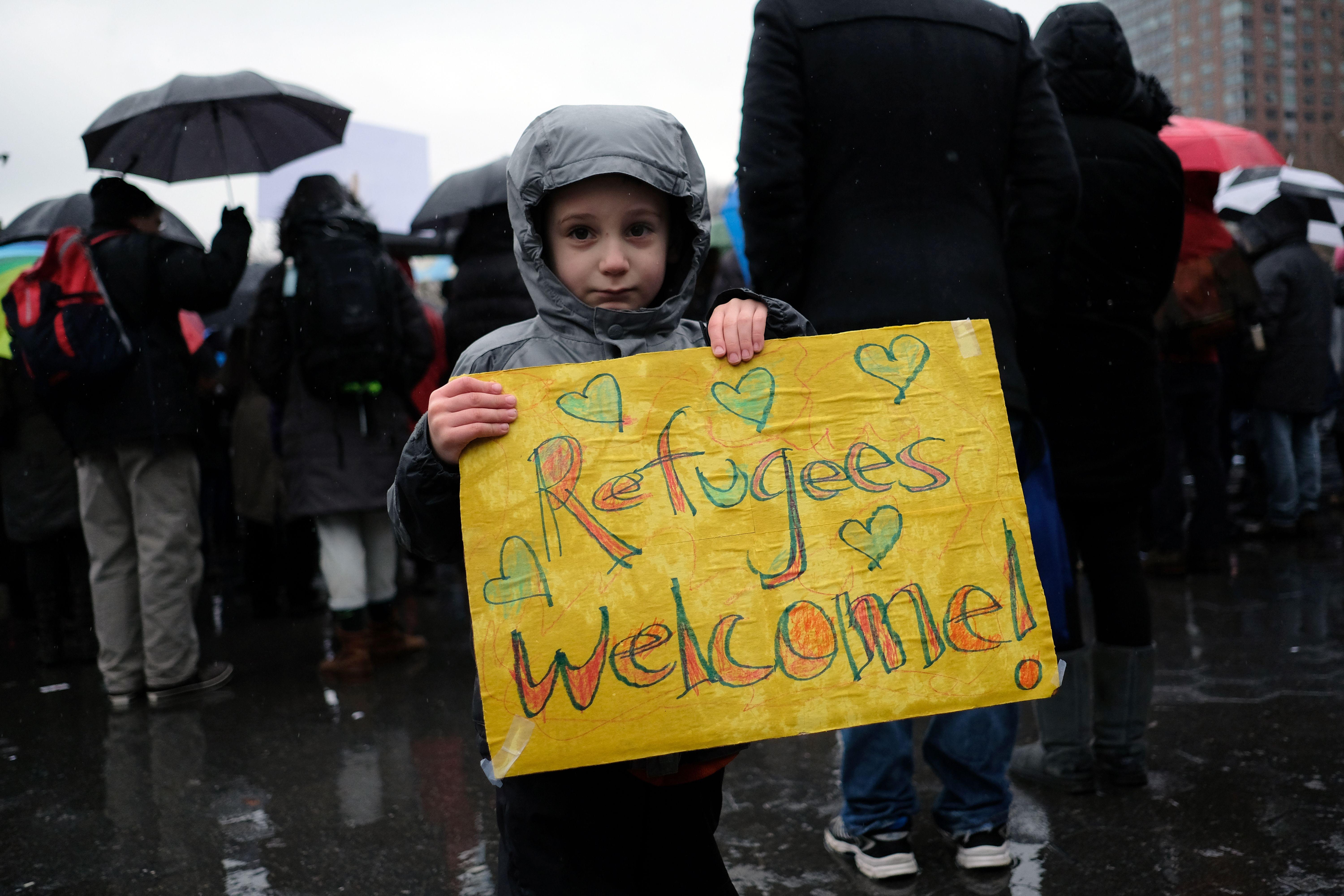 HIGHLAND PARK, New Jersey -- At Global Grace Café in Highland Park, New Jersey, the cuisine is diverse, and so are the refugees who prepare it.

On Tuesday, officially dubbed "World Refugee Day" by the United Nations, Buchra Shatar was in the kitchen, tossing a salad to add to the lunch menu of baba ghanoush, hummus and pita bread for a room full of customers.

Shatar, 25, fled war-torn Syria with her husband, Diyaa Khatib, in 2013. After waiting four years in Jordan, they made it through the vetting process to immigrate to the United States. They and their two children arrived in January.

"America is very beautiful," said Khatib, who joined his wife at the Reformed Church of Highland Park, which runs the café. "The people in America help me… for my home, for furniture, for everything."

Khatib and his family are among the 22.5 million people who had been forced to flee their homes and seek shelter as refugees globally by the end of 2016, according to the U.N.  Several resettlement agencies tell CBS News that, since President Trump took office, they have had to cut back on the number of refugees they expect to welcome into the United States this year.

Now Khatib, 31, worries that two of his brothers and his mother, who are still in Jordan, won't be allowed to reunite with him in the United States as he had hoped.

"I love my family," he said, using the English he has learned in the past few months. "I need (to) live together."

Uncertainty over the Trump administration's immigration policies has contributed to a dramatic drop in the number of refugees approved to enter the country, even though the president's executive order to limit refugees remains tied up in the courts.

According to the State Department's Refugee Processing Center, 7,371 refugees were admitted to the United States in December 2016, the month before Donald Trump's inauguration. In March, just 2,070 were admitted -- a 71.9 percent drop.

Admissions ticked up to 3,989 in May, but several refugee resettlement agencies said that at the current pace, they won't meet their targets for the fiscal year, which runs from October 1, 2016 to September 30, 2017. They also said it was not clear how the United States will accept 110,000 refugees during this period -- a ceiling set by President Obama which remains in place.

"We're not on track," said Nina Zelic, director for refugee services at Lutheran Immigration and Refugee Service, one of nine main refugee resettlement agencies in the United States. "Things are fairly sluggish."

Zelic said her agency was planning to resettle more than 11,500 refugees by the end of September. So far, it has brought in around 8,500. "Looking at past months' trends, we won't get to where we want," she explained. "It's so volatile. It's hard to tell."

The uncertainty, she said, "has wreaked havoc on the program and on refugees."

"They're stuck places," she added. "It's devastating."

Matthew Soerens, the U.S. director of church mobilization at World Relief, said his agency has also been resettling refugees much more slowly than the State Department had originally told it to expect.

"Based on the most recent information we have from the State Department, which has changed several times and could change again, we currently expect to reach just over 70 percent of the numbers we originally anticipated," Soerens said.

The confusion is trickling down to resettlement agencies' local branches, including the Jersey City, New Jersey, office of the Church World Service.

Courtney Madsen, the office's interim director, said her team would likely resettle only 110 of the 170 refugees it was expecting to welcome through September.

"That depends on whether people get their travel clearances to come," she explained. "Because of the executive order, there were some delays so a lot of their clearances and background checks expired."

A State Department spokesperson told CBS News budget limitations were one reason for the delays in the vetting process, but a bill signed by President Trump in May included money for the Refugee Admissions Program through the rest of the fiscal year. The spokesperson also said the Department of Justice has advised the State Department to process refugee applications at the current ceiling of 110,000 -- without regard to President Trump's executive order aimed at restricting admittance of refugees.

But Soerens, of World Relief, told CBS News that, "nationally, across all agencies, the total numbers will still be well short of 110,000," and federal funding covers only 75,000 refugees.

He is also concerned that the United States will agree to accept far fewer refugees in the next fiscal year. That depends on President Trump, he said, and the funding Congress sets aside for refugee processing, vetting and resettlement.

Rev. Seth Kaper-Dale, who helped resettle the Syrian couple Shatar and Khatib through his non-profit Interfaith-RISE, said he hopes President Trump will see refugee resettlement as a way to "build bridges," not as a "security issue."

"We ought to be joining the world to address the biggest refugee crisis on our planet," he said. "Whether he has the wisdom to see that or not… I can't say."

Khatib also offered a message for the president. Refugees like him and his family are simply searching for safety and opportunities, he said.