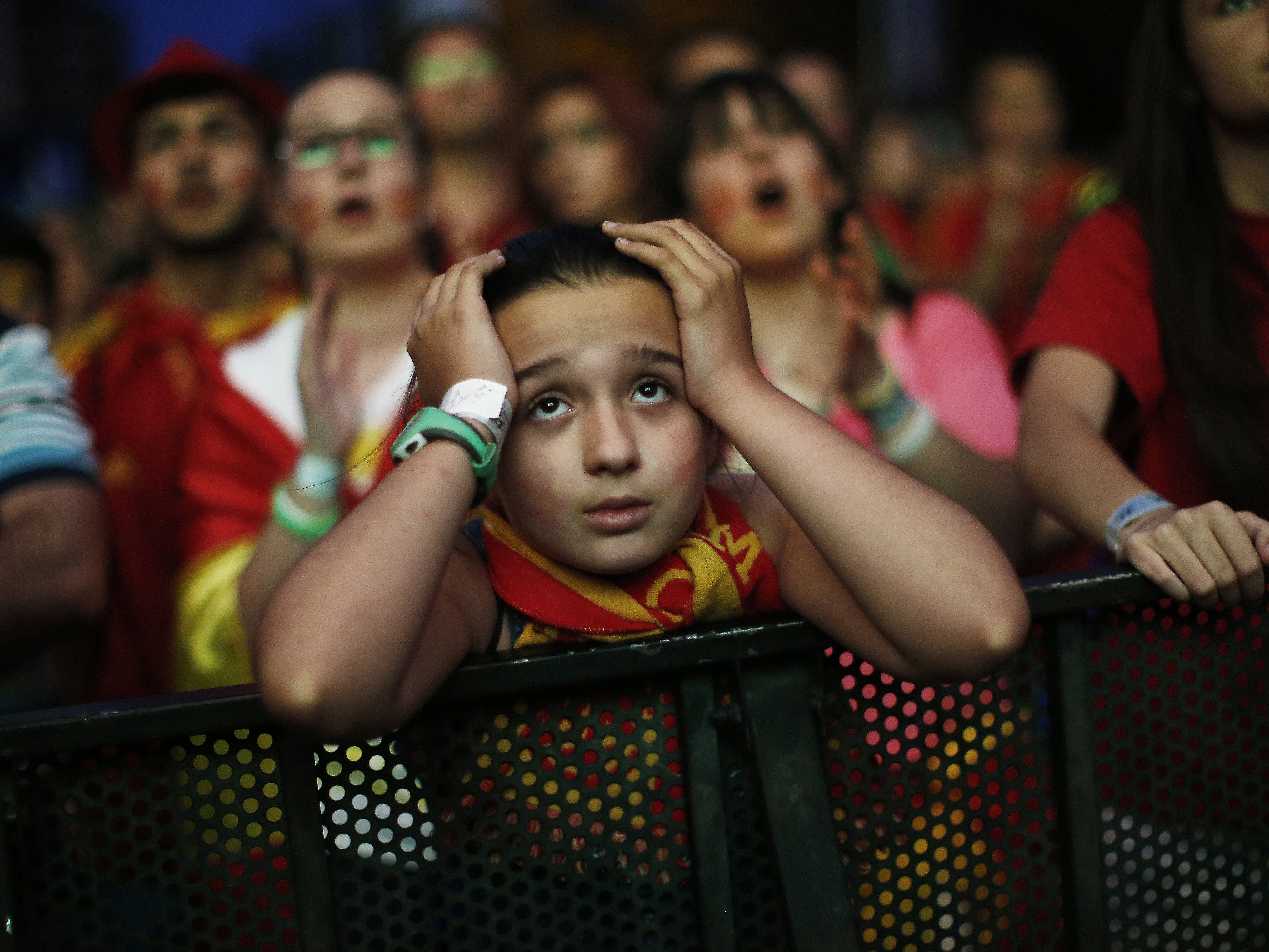 RIO DE JANEIRO Defending champion Spain, the dominant global football power for the past six years, was eliminated from World Cup contention Wednesday with a 2-0 loss to Chile.

Eduardo Vargas tricked goalkeeper Iker Casillas into diving the wrong way, then shot into an unguarded goal in the 20th minute. Charles Aranguiz scored in the 43rd when the ball landed at his feet after Casillas punched out a free kick.

"I only ask fans for forgiveness, we did everything we could," said Casillas, who lifted the World Cup trophy four years ago.

Spain's second loss, after a 5-1 rout by the Netherlands, ended any hope of advancing. Chile and the Netherlands will both make it to the knockout stage regardless of who wins the game between them Monday, which will only decide the Group B winner.

Perhaps the Euro 2012 final was the footballing high point of the era: A 4-0 dismantling of Italy on a similarly balmy evening in Kiev, Ukraine

Spain came to Brazil with a very similar - but older - team to the one that won those titles. They added Brazilian-born striker Diego Costa, but he failed to score a goal and was substituted in both matches.

"We have no excuses," said Spain coach Vicente del Bosque. "We were too slow, timid from the start today. It's a sad day for all of the players. Time to think about the future."

Spain's "tiki-taka" style of play - keeping the ball for long stretches with short passes, and only shooting when you had a clear opening - had not been working as well in recent years. Brazil defeated Spain 3-0 in last summer's Confederations Cup, a warm-up for the World Cup.

The stars who had made the system go are still on the team, but they've clearly lost some speed and their connections haven't been as sharp. Barcelona midfielder Xavi Hernandez, who often delivered the key pass, didn't play Wednesday.

Spain became the third straight European defending World Cup champion to flop in the group stage. France in 2002 and Italy four years ago also failed to advance, or even win a match.

Badly needing a win, del Bosque stayed loyal to captain Casillas despite the veteran goalkeeper's errors against the Dutch.

But two pillars of Spain's title runs, Hernandez and Barcelona teammate Gerard Pique were left out, despite 194 combined appearances.

Xabi Alonso probably should have joined them. His agonizing first half typified Spain's problems and his errors led to both goals.

And Alonso's selection left a younger version of his former self, Atletico Madrid's Koke, on the bench until the logical change was made at halftime.

Alonso gave away the ball to Alexis Sanchez to start a move down Chile's right wing by Arturo Vidal and Aranguiz, leading to Vargas' score. Alonso trailed behind the play and put his hands to his head.

Alonso was booked in the 40th before conceding another foul, on Sanchez, three minutes later 22 yards out.

When Casillas punched away Sanchez's curling free kick, Aranguiz trapped the ball then flicked a rising shot spinning away from the goalkeeper's reach.

Often wayward in its passing, Spain missed two clear chances early in the second half.

Costa was slow on Andres Iniesta's threaded pass in the 49th, and Sergio Busquets was guilty of a glaring miss, volleying wide from five meters in the 53rd.

After Bravo pushed away shots by substitute Santi Cazorla and Iniesta, Chile's win was sealed.

Asked if it marked the end of an era, Casillas said: "We'll focus on the good things this team did."