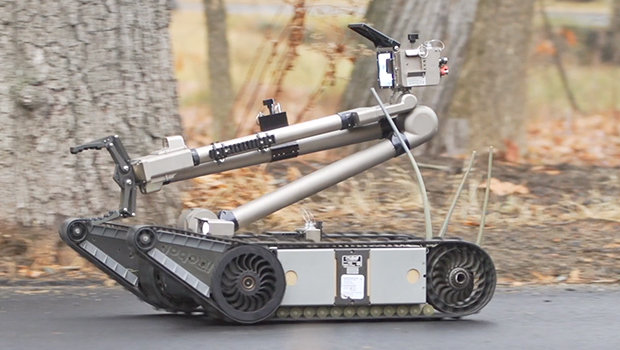 More than 170,000 security officers will patrol the 12 World Cup stadiums during the 2014 FIFA World Cup, to be played June 12 to July 13, 2014. As has come to be expected at large-scale events, this small army of police, soldiers and private contractors will use helicopters, drones, and surveillance equipment to strengthen their efforts. But this time, they'll also have a troupe of high-tech helpers: 30 roving robots will be on hand to investigate any suspicious packages.

Known as PackBots, they're about the size of a carry-on suitcase, are guided by game-style controllers and are more commonly used on battlefields in Iraq and Afghanistan as a tool to investigate potential explosive devices. There will be two "bots" in each of the 12 host cities, as well as additional units in Rio de Janeiro, Brasilia and Sao Paulo.

The roving robots have four cameras that capture high-resolution images and video. Each is equipped with a 6-foot retractable arm that is able to lift a suspicious package and move it to a safer location for further investigation. It can lift up to 30 pounds and be controlled from as far as 800 meters away.

"The whole idea is, how do you separate the operator from the situation and successfully neutralize the situation," Tim Trainer, a vice president at iRobot, the Massachusetts robotics company that created the bots, told CBS News.

Mounted on the retractable arm is a piece of a shotgun barrel. Filled with water, this "disruptor" fires a very high-velocity stream of water at the package. The goal is to detach the triggers - such as cell phones - that are attached to the package, mechanically cutting off the trigger from the bomb.

"This renders it safe and because its water you preserve the forensic evidence," said Trainer.

Versions of PackBot have also been used in Afghanistan, Iraq and other war zones, but, Trainer noted, "a growing portion of our market is police and law enforcement as well as first responders around the world." They were also used in the aftermath of the Fukushima nuclear power plant disaster in Japan, and a similar robot was used to neutralize a bomb in an SUV in New York City's Times Square in 2010.

With more than 600,000 fans expected to descend on Brazil during the World Cup, officials are on high alert.

"Our biggest concern is with the so-called 'lone wolves,' who are individuals operating on their own," Luiz Alberto Salaberry, the director of the Counter-terrorism Department at the Brazilian Intelligence Agency's (ABIN), told the website InfosurHoy.com in April. Ed Connors, president of the Institute for Law and Justice, has studied major event security planning and management for the past 10 years. He is not involved in World Cup planning, but says that the lone wolf is also a major concern at U.S. events, pointing to the Tsarnaev brothers, who allegedly detonated two bombs near the finish line of the 2013 Boston Marathon.

The Brazilian government started increasing security capabilities as soon as it earned the rights to host the 2014 World Cup, the 2016 Olympics. The first step was to create the Special Secretariat of Security for Big Events (SESGE) to handle the preparations. The SESGE put out a bid for proposals, selecting the $7.2 million iRobot contract in April 2013.

The PackBots arrived in Brazil in June and July of 2013, in time for the 2013 FIFA Confederations Cup. The event was a strong test for the increased security measures. "There was one day in June when there were more than 1 million people on the streets and we had more than 50,000 officers working. Even so, the competition schedule was not affected, the demonstrations did not impact on the delegations and there were no injuries caused by the actions of the officers," SESGE official Andrei Rodrigues told HostCity.net in February 2014.

During the tournament, the police forces "certainly deployed them and certainly investigated some potential explosive devices," said Trainer.

The need for increased security at sporting events has never been more apparent than the 2013 Boston Marathon. But Connors says that turning to PackBots does little for preventing these attacks. "They're fine but they only have such an extremely narrow application," he said, explaining that the bots are only used after a threat has been identified.

A better way to spend security funds would be hiring a cadre of bomb-sniffing dogs, according to Connors. "I am absolutely fascinated that to this day, we still have nothing to get detection on any kind of explosive than a dog," he said. "When I talked to the Boston Police Department about six months ago, discussing things to do differently, I said you have to double and triple the dogs." The Brazilian government has not announced any plans regarding bomb-sniffing dogs, and Connors says he'd be "shocked" if there are a sufficient number of dogs working with the police in Brazil.

There is an option to add chemical-detection capabilities to PackBots, but Brazil did not ask for this feature, said Trainer. Connors said the chemical-detection would have been a good addition, because it is easy even for amateur criminals to add lethal chemicals to homemade explosive devices.

Beyond the PackBots, the police force will be working with special eyeglasses that contain facial-recognition software. The glasses include cameras that take up to 400 still images per second. The images are then stored in a database that can hold up to 13 million faces. If an attack does occur, the database will help identify possible perpetrators. But because it is not tapping into an existing criminal database, Connors once again says it is not addressing the right aspect of security.

"None of these things that they've hyped on so far have anything to do with prevention," said Connors. "And prevention, to me, that's where you need to spend your money."