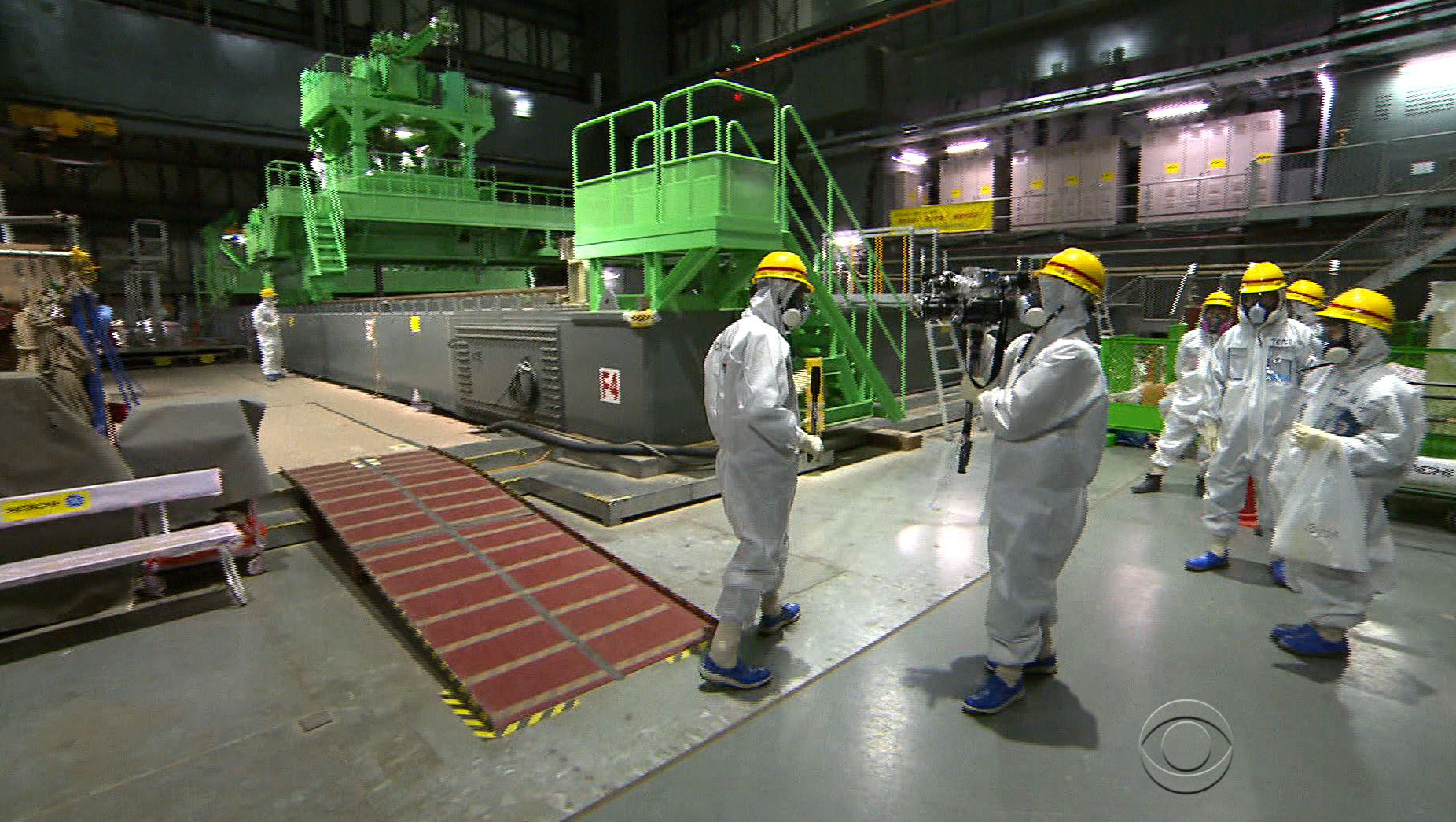 OKUMA, Japan -- A CBS News crew got a rare look inside the damaged Fukushima Daiichi nuclear power plant. Nearly three years after the earthquake and tsunami, the plant is still emitting radiation, and likely will be for years.

To protect themselves from radiation, a CBS News crew suited up like the 4,300 decontamination workers here. Once, this was the heart of a radioactive "no-go zone." Now it's safe enough to spend a  few hours inside.

TEPCO, the company  that owns the crippled plant, is still struggling to deal with the disaster. All four reactors are still emitting radiation. But TEPCO has made some progress.

This is what TEPCO wants the world to see: the heart of the decommissioning work taking place in Reactor 4.

Following the earthquake and tsunami in 2011, a hydrogen explosion tore off the roof of this reactor.

At the time, Reactor 4 was not in use, but that explosion sent debris and chunks of concrete into a pool where the nuclear fuel was being stored.

The CBS crew was able to watch the delicate and dangerous work of removing some of the 1,500 radioactive fuel rod assemblies. If the rods break, they could release more radioactive gases.

There's an analogy that removing these rods is like removing a cigarette from a crushed pack.

"Take that analogy," TEPCO engineer Masayuki Ono said in Japanese, "and imagine that the cigarette in that box is lit."

Ono said they have removed 15 percent of the fuel from Reactor 4. But it will be far more difficult to retrieve fuel from the other three reactors that melted down. Those are so radioactive that the technology to dismantle them does not exist yet.

TEPCO injects hundreds of tons of water daily into the reactors to keep them cool. But groundwater is pouring into the damaged reactors and has to be pumped out and stored.

They can't build these tanks fast enough -- an additional 400 tons of contaminated water needs to be stored every day. That's as much water as the average American household uses in a year.

At the end of the tour, the CBS crew was checked for radiation exposure. In four hours, correspondent Seth Doane received the equivalent of less than a chest X-ray.

The 24-hour-a-day cleanup operation is just beginning. It could cost upwards of $100 billion and take up to 40 years to complete.

How a "miracle piano" has helped to heal Japan's tsunami scars
More
Thanks for reading CBS NEWS.
Create your free account or log in
for more features.
View CBS News In
CBS News App Open
Chrome Safari Continue
Be the first to know
Get browser notifications for breaking news, live events, and exclusive reporting.