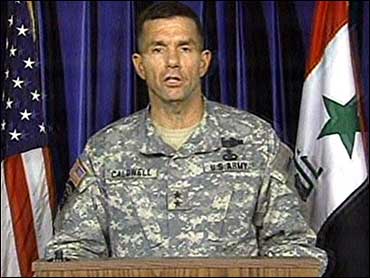 An Iraqi farmer said he saw seven heavily armed gunmen capture two American soldiers during an attack on a road checkpoint south of Baghdad, while U.S. troops searched for their comrades for a second day.

Another Iraqi said Sunday that the Americans were offering $100,000 for information leading to the abductors, but the U.S. command denied that.

The White House promised to do everything it could to find the soldiers and said it had a message for anybody who may have taken the two men: "Give them back."

What puzzles military officials about the soldier's disappearance is why the team seemed so isolated at the time of the attack, reports CBS News correspondent Lee Cowan. U.S. commanders say it would only be under extraordinary circumstances that a US patrol would split up.

But CBS News has been told that the Humvee from where the men disappeared was at a canal crossing at the time of the attack. They were separated by a couple hundred yards from their nearest U.S. colleagues — who were at a checkpoint to the northeast. Military officials don't know why they may have been that far away from a checkpoint alone — but they're casting doubt on witnesses who say that the doomed soldiers were left there after the other U.S. soldiers sped off in pursuit of the attackers.

White House spokesman Tony Snow said he could not confirm the two missing soldiers were abducted, but he told "Fox News Sunday" that anybody who might be holding them should "give them back."

"Obviously, there is a vigorous effort to try to locate them and to bring them back safely," he said in an interview with CNN.

Iraqi Foreign Minister Hoshyar Zebari said the soldiers appeared to have been taken prisoner. "Hopefully they will be found and released as soon as possible," he said on CNN's "Late Edition."

The U.S. military said Saturday that soldiers at a nearby checkpoint heard small-arms fire and explosions during the attack at 7:15 p.m. Friday, and a quick-reaction force reached the scene within 15 minutes. The force found one soldier dead but no signs of the other two.

Maj. Gen. William Caldwell, spokesman for U.S. forces in Iraq, said blocking positions were established throughout the area within an hour of the attack to keep suspects from fleeing. He also said divers would search a Euphrates River canal near the attacked outpost.

The two soldiers were the first to go missing in the Iraq war since Sgt. Keith M. Maupin of Batavia, Ohio, was captured on April 9, 2004, when insurgents ambushed his fuel convoy west of Baghdad.

That June, Al-Jazeera aired another tape purporting to show a U.S. soldier being shot. But the dark, grainy tape showed only the back of the victim's head and did not show the actual shooting. The Army ruled it was inconclusive whether the soldier was Maupin.

Elsewhere in Iraq, U.S. and Iraqi troops met little resistance as they established new outposts in southern Ramadi in an operation aimed at denying supplies to insurgents in Iraq's biggest Sunni Arab city.

U.S. commanders said the move wasn't the precursor to a rumored assault to drive out insurgents along the lines of the 2004 attack in Fallujah, but rather an "isolation" tactic.