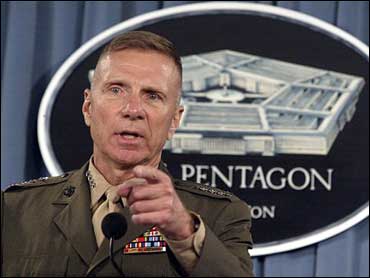 The top Marine said Wednesday he is "gravely concerned" by allegations of atrocities committed by his troops against Iraqi civilians but declined to say what investigators have found thus far.

In his first public remarks about the allegations concerning Iraqi civilian deaths in the town of Haditha last November and in Hamdaniya two months ago, Gen. Michael Hagee, the Marine Corps commandant, sought to assure the public that any Marine found to have violated standards of behavior will be held accountable.

Hagee has seen the still-secret photos of men and women shot at close range, and spoke at a 15-minute Pentagon news conference about the allegations that Marines are responsible for killing Iraqi civilians in cold blood, CBS News correspondent David Martin reports.

Asked at a 15-minute Pentagon news conference whether he had considered resigning over the matter, Hagee replied, "I serve at the pleasure of the president, and I have not submitted any resignation."

He said he could not comment on any aspect of the investigations, which are being conducted by the Naval Criminal Investigative Service.

The Haditha case centers on allegations that a small number of Marines from the 3rd Battalion, 1st Marine Regiment murdered 24 Iraqi civilians — included unarmed women and children — on Nov. 19 after a roadside bomb in the town killed one of their fellow Marines.

The allegation in the Hamdaniya case is that Marines pulled an unarmed Iraqi man from his home on April 26 and shot him to death without provocation. Seven Marines and one Navy corpsman in that unit were taken out of Iraq and put in the brig at Camp Pendleton, Calif., pending the filing of any charges against them.

But, as Martin reports, defense lawyers who have spoken with the Marines, say there were fire fights going on throughout Haditha on the day of the killings and that civilians were accidentally shot amid the fog of war.

Hagee acknowledged the existence of a set of photographs taken by a Marine intelligence team that examined the scene of the killings in Haditha, but he would not discuss any specifics. News reports have said the photos show that civilians in at least two houses, including several women and children, were shot in the head and torso at close range.

That evidence matches the accounts offered by villagers in interviews with The Associated Press and other news organizations. But it conflicts with the Marines' original public assertion that 15 civilians were killed by the explosion of the roadside bomb that also killed one Marine, and that eight insurgents were killed in a subsequent firefight.

The Marines now admit that their original version of events was false, but they have not presented a corrected version pending the outcome of the investigations.

Meanwhile, Prime Minister Nouri al-Maliki called the killings "a horrible crime," his strongest public comments on the incident since his government was sworn in May 20.

"This is a phenomenon that has become common among many of the multinational forces," al-Maliki said. "No respect for citizens, smashing civilian cars and killing on a suspicion or a hunch. It's unacceptable."

Al-Maliki's remarks appeared to lend credibility to complaints by Iraqis of what they see as U.S. troops' cultural insensitivity and disregard for Iraqi lives. To many Iraqis, the soldiers are occupiers seeking to control the country's oil wealth.

CBS News correspondent Elizabeth Palmer reports too many Iraqis have seen raids on their homes and too many security operations gone wrong — like the death earlier this week of a pregnant woman who was killed when the car rushing her to the maternity hospital accidentally drove up a road closed by U.S. forces.

Hagee said he would wait until the Haditha and Hamdaniya criminal investigations are completed before he would remove any commanders from their posts. "I am waiting for those investigations to be complete so that I can understand actually what happened, both on the ground and within the chain of command," he said.

Noting the growing public speculation about the case, Hagee urged patience as investigators complete their work.

"We intend to keep you informed to the fullest extent possible without interfering with the legal process," he said.

Hagee said no one should doubt that the allegations will be fully and fairly investigated.

"As commandant I am gravely concerned about the serious allegations concerning actions of some Marines at Haditha and Hamdaniya," he said. "I can assure you that the Marine Corps takes them seriously."

"As commandant I am the one accountable for organization, training and equipping of Marines," he added. "I am responsible and I take these responsibilities quite seriously."

Hagee, who is due to complete his four-year tenure as Marine commandant this year, traveled last week to Iraq to reinforce the importance of adhering to Corps standards of behavior.

At his news conference he said he was pleased to find that "their morale is really quite high," despite concerns about the atrocity allegations.

The commandant said he plans to make additional trips, to Marine bases in California, Hawaii and Japan, to deliver the same message.