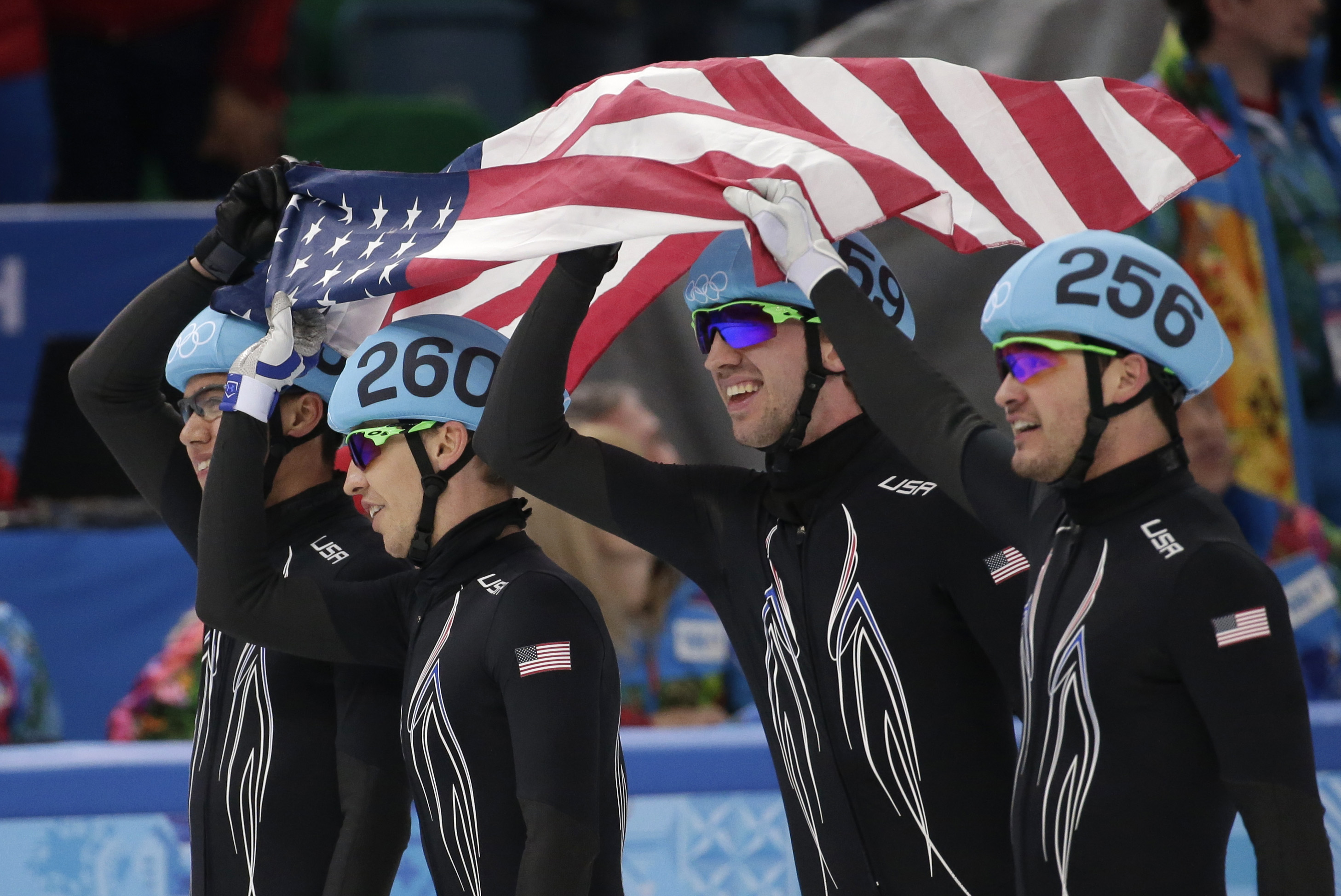 Ahn led Russia to victory in the 5,000-meter relay, taking the lead for good by passing American J.R. Celski with eight laps to go. Earlier in the evening, Ahn won the 500.

The South Korean-born skater who switched nationalities in 2011 finished the Sochi Games with a medal in all four of his events.

He applauded as he crossed the finish line.

The relay got off to a typically chaotic start with China and the Netherlands crashing not even halfway through the opening lap. It became a two-nation race between Russia and the U.S. for most of the 45 laps.

Eddy Alvarez, Celski, Creveling and Jordan Malone took silver for the first U.S. medal in speedskating at the Sochi Games. The U.S. speedskaters were shut out in 12 long track events, and had failed to get on the podium in the first seven short track races.

The medal helped the Americans avoid a shutout for the first time since 1998 in Nagano. U.S. speedskaters, including favorite Shani Davis, didn't medal, and some blamed the new high-tech suit worn by the team.

Earlier, Ahn rallied to win the 500, overtaking Wu on the last lap after Liang Wenhao of China crashed out. It was the only Olympic race Ahn had never captured, and he became the first skater to win all four individual events at an Olympics in his career.

Ahn sustained a major knee injury that prevented him from competing four years ago in Vancouver, and soon after he made Russia his adopted country. Ahn earned bronze in the 1,500, giving Russia its first medal in the sport on the opening day of competition in Sochi. He then won the 1,000.

Ohno, now retired and working as a TV commentator at the games, had been confident that Ahn would tie his record set from 2002-2010.

In the women's 1,000, Park Seung-hi of South Korea won her third medal of the games.

Park took over the lead for good from American Jessica Smith early in the race. Park earned her other gold medal in the women's 3,000 relay, and took bronze in the 500.

Fan Kexin of China earned silver, and Shim Suk-hee of South Korea earned bronze in the crash-free final. Shim also won her third medal, having taken silver in the 1,500 and joining Park on the victorious relay.

Jorien ter Mors of the Netherlands finished third in her 1,000-meter semifinal heat, ending her bid to become the first speed skater to win medals in both short and long track.

Ter Mors won the B final competing in short track about two hours after helping the Netherlands set an Olympic record in long track team pursuit. She had already won gold in the 1,500 on the big oval.

Meanwhile, the CEO of Under Armour said the company is "doubling down" with its new eight-year deal to continue providing uniforms for U.S. Speedskating.

Kevin Plank told the hosts of "CBS This Morning" that the athletic wear company has weathered a great deal of criticism the past couple weeks, as U.S. athletes struggled in the Winter Olympics while skating in the suits. This deal is one step in moving past the controversy.

"We got beat up a little last week," he said, "and speed skating is obviously getting beaten up. What we don't do, is we don't retreat. We get knocked down, we dust ourselves off, and we come back bigger, better and stronger than we were before."