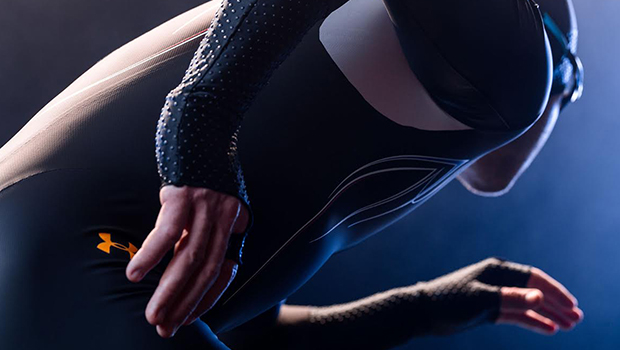 Team USA’s long-track speed skaters will be sporting some of the most high-tech apparel the sport has ever seen as they take the ice at  the 2014 Winter Olympics in Sochi.

The Mach39 speed skating skins are the culmination of a two-year partnership between Under Armour and Lockheed Martin.

“One of the simplest things you can do to make apparel faster is to make sure it fits perfectly,” sports engineer Kim Blair, Ph.D., explained to CBS News. Blair was not involved in this project, but as worked with Olympic skiers and cyclists for more than a decade.

To get that perfect fit, Under Armour scientists visited the team's training facility in Salt Lake City and used a 3D image scanner to capture highly accurate digital measurements of the athletes from every angle.

“It takes basically what’s called a point cloud," Blair said. "The light bounces off every surface point on your body and allows you to make a 3D representation in the computer of your body shape.”

The next step in the design process was using motion capture technology to understand the skaters’ various body positions during a race.

The innovation team used the 3D images to create six different fiberglass models of skaters. From there, it was on to the wind tunnels at Lockheed Martin and the Glen L. Martin wind tunnel at the University of Maryland. They tested dozens of fabrics, and different ways of combinations of the fabrics, to determine the optimal material to wear on each part of the body.

“In speed skating or other sports like that where the athlete is moving a lot, different parts of the body are facing the wind at different times, and you have to account for all of that,” explained Blair. “A lot of times you use a lot of different materials and different material characteristics depending on where they are on the body.”

After 300 hours of wind tunnel testing, the final design emerged. It features strategically-placed polyurethane strips on the forearms, calves and forehead. These reduce drag by breaking up the airflow, just like the dimples on a golf ball. On the inside of the thighs, patches of ArmourGlide are said to reduce friction by 65 percent.

The suit also has a new zipper, with the ends meeting near the shoulder rather than the neck, for increased comfort. In the past, athletes have hampered their medal chances by forgetting to zip up when they step to the starting line, increasing the drag when they raced. By having the zipper meet at the shoulder, Under Armour hopes to reduce the chances of the skaters forgetting to zip their suits.

Asked whether the investment in innovation will pay off in gold medals, Blair said it will still come down to the athlete wearing the suit: “It depends if it’s on the fastest skater in the world."