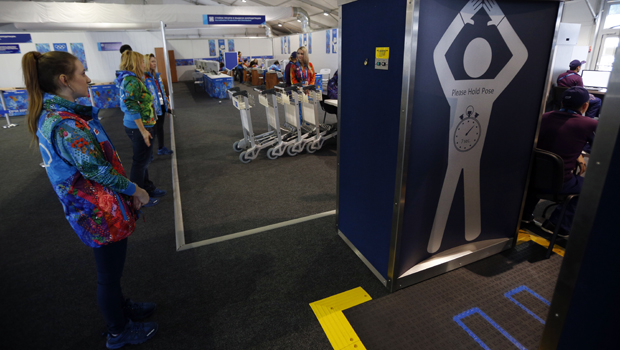 WASHINGTON -- A top U.S. intelligence official said Wednesday there has been an uptick in reports of security threats against the Olympic Games in Sochi, but the key concern for an attack centers on locations outside the main event areas.

The director of the National Counterterrorism Center, Matthew Olsen, told the Senate Intelligence Committee that there is "substantial potential" for a terrorist attack against so-called softer targets outside Sochi. He said there is extensive security at the sports venues in the Russian city.

FBI Director James Comey told the panel that U.S. cooperation with the Russian Security Service, the FSB, has improved and officials from the two agencies have discussed the Sochi threat.

Russia is mounting a massive security operation for the Olympics amid threats from Muslim insurgents from the Caucasus region, but after all the talk of terror threats, corruption, overspending and anti-gay legislation, the head of the Sochi Olympics is determined to show the world the games will be a huge success.

Nine days before the opening ceremony, organizing committee chief Dmitry Chernyshenko said Wednesday that Sochi is "fully ready" and will deliver safe, friendly and well-run games that defy the grim reports that have overshadowed preparations.

"History will be made," he said of Russia's first Winter Games.

With Sochi facing threats of terrorist attacks from insurgents from the North Caucasus, Chernyshenko said the city is the "most secure venue at the moment on the planet" and promised that tight security measures will not detract from the atmosphere of the games.

"I can assure you that Sochi will be among the most security-friendly games and all the procedures will be very gentle and smooth," he said in a conference call with reporters.

On CBS' "Face the Nation" Sunday, Rep. Mike McCaul, R-Texas and chairman of the House Homeland Security Committee, called the security threat "the greatest I think I've ever seen because of the proximity of the terrorists to the Olympic village."

Russia is deploying more than 50,000 police and soldiers to guard the Olympics. A Muslim militant group claimed responsibility for back-to-back suicide bombings that killed 34 people in Volgograd in late December and threatened attacks on the games.

"You will see thousands of (security) people around but it's important to understand that the Olympics is a global event and the security is also a global multi-national event and state authorities are doing (their) utmost to deliver Sochi as safest for everyone," Chernyshenko said.

Referring to the Russian law banning gay "propaganda" among minors, he repeated assurances that Russia will not discriminate against anyone at the Olympics on the basis of sexual orientation.

However, Chernyshenko appeared to contradict IOC President Thomas Bach, who said Monday that athletes - prohibited by the Olympic Charter from political demonstrations or gestures on the medal stand and other venues - would be free to express their personal political views at news conferences.

"I don't think they are allowed by charter to express those views that (are) not related to the sport at the press conference room," Chernyshenko said, adding that organizers had set up a protest zone - or "Speaker's Corner" - in the city.

The uproar over the gay law, as well as criticism of Russia's human rights record and Vladimir Putin's policies, has led a number of Western political leaders to shun the Feb. 7 opening ceremony and the games.

Chernyshenko, however, said the number of world leaders attending the ceremony would be "the highest in the history of the Winter Games." He declined to give the number.

Russia is spending a record $51 billion on the games, including the long-term infrastructure investment in roads, tunnels, railways and hotels to turn Sochi into a year-round resort. Critics allege that billions of dollars have disappeared in kickbacks and other corrupt deals.

As CBS News correspondent Mark Phillips reported Monday, the best place to discover why costs have risen so high may not be among the gleaming new venues, but on a street in a town just outside London, where Valery Morozov, once an Olympic contractor - now a fugitive - lives.

He's fled Russia for fear of his life, he told CBS News, because he couldn't stand the corruption any more.

"I was informed that there is a contract on my assassination," he said. Not because he knew too much and could finger other people, but because, he said, "They miscalculated me."

Miscalculated, he said, because the local Olympic organizers told him to add about $30 million to his bill for various Sochi construction projects, and then pay that money back to them as kickbacks.

In Wednesday's conference call, Chernyshenko dismissed suggestions that claims of misspending had tainted the games.

"If you come and look around, this is the most state-of-the-art sports facilities in the world," he said. "Everything will be the cutting edge. This would not have been possible if these allegations of so-called corruption were true. The stadiums, the roads, the new hotel rooms - this infrastructure speaks for itself."

Ticket sales have also been an issue, with many foreign fans staying away, raising concerns over the prospect of empty seats. Chernyshenko said more than 70 percent of the tickets have been sold, with 20 percent set aside for fans to buy on site at box offices.

"It's high demand, long queues," he said. "I'm quite confident that the stands will be full."

Chernyshenko, who comes from Sochi and has worked on the Olympic project for a decade, said he had no regrets despite all the criticism that has been leveled at the games.

"It's a once-in-a-lifetime opportunity and now Sochi has really become brilliant and a showcase of new Russia," he said, calling it "the role model, the blue print for the rest of the country to follow."

Meantime, Chernyshenko said, Sochi has plenty of snow and the three Olympic Villages will open to the athletes on Thursday.

"We're fully ready," he said. "We're in a great shape. Everything is in place. The only thing remaining is for the athletes to come and shine at the venues. Everything so far is perfect."