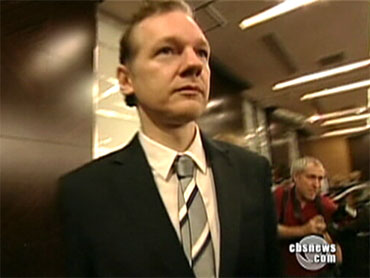 Supporters say Julian Assange, an Australian living in Britain, is considering seeking asylum in Switzerland. He told a Spanish newspaper that he faced "hundreds of death threats," including some targeting his lawyers and children, aside from the pressure he is getting from prosecutors in the U.S. and other countries.

After a number of web companies dropped WikiLeaks, much of the site's traffic was coming through the wikileaks.ch Web address Sunday. The address is controlled by the Swiss Pirate Party, a group that formed two years ago to campaign for freedom of information. The site's main server in France went offline but it remained reachable through a Swedish server.

The site showed Assange had begun seeking donations to an account under his name through the Swiss postal system in Bern, the Swiss capital, while also using a Swiss-Icelandic credit card processing center and other accounts in Iceland and Germany. He lost a major source of revenue when the online payment service provider PayPal cut off the WikiLeaks account over the weekend.

Assange has been widely praised and criticized. Supporters view him as a savior of the media and free speech; critics vilify him for brazenly unleashing diplomatic secrets, as well as for earlier leaks involving the wars in Iraq and Afghanistan.

U.S. Senate Republican leader Mitch McConnell called Assange "a high-tech terrorist." He told NBC's "Meet the Press" he hopes Assange will be prosecuted for the "enormous damage" the disclosures have done to the country and to its relationship with its allies.

But even as governments put pressure on Assange, WikiLeaks lives on. The Swiss Pirate Party said Sunday that wikileaks.ch was receiving about 3,000 visitors a second.

The party also said supporters are creating "mirrors" of the WikiLeaks site on their own servers, meaning the diplomatic cables will remain available even if WikiLeaks loses its own site.

"Even if you take down the server in Sweden, it's too late," Swiss Pirate Party Vice President Pascal Gloor told The Associated Press on Sunday.

"There are hundreds of mirrors of WikiLeaks now," he said. "It's a test for Internet censorship. Can governments take something off the Net? I think not. There are copies of the website everywhere."

PayPal, a subsidiary of U.S.-based online marketplace operator eBay Inc., said it cut off the WikiLeaks website because it was engaged in illegal activity.

Assange is now in Britain, according to his British lawyer. Marc Andrey, a spokesman for the financial services arm of Swiss Post, told the Swiss weekly NZZ am Sonntag that Assange stated when opening an account with the postal system that he had a residence in Geneva.

Andrey said the Swiss Post was reviewing its "relationship" with Assange. He would have to prove he obtained Swiss residency, lives near the Swiss border, or owns property or does business in Switzerland to keep the Postfinance bank account that he opened last month.

The U.S. ambassador to Switzerland, Donald Beyer, told NZZ am Sonntag that Switzerland "should very carefully consider whether to provide shelter to someone who is on the run from the law." The SonntagsZeitung quoted Beyer as saying he told the Swiss government that WikiLeaks would likely post more than 250 cables from the American Embassy in Bern.

Amazon previously stopped hosting WikiLeaks' Web site and governments and hackers were continuing to go after the organization.

French web hosting company OVH, which owns a server wikileaks.ch had been using, didn't immediately respond to calls Sunday. France's Industry Minister Eric Besson had warned Friday that it was unacceptable to host a site that "violates the secret of diplomatic relations."

The Swiss Pirate Party convened an impromptu news conference late Friday in a high-tech media building in Biel, Switzerland. Its leaders said they had no special knowledge of Assange's whereabouts or ability to contact him, but had spoken with him weeks ago to help seek asylum in Switzerland. That was during Assange's visit to Geneva last month when he spoke to reporters at the United Nations.

In an online chat with El Pais in Spain, Assange said the hunt for him was tough.

"We have hundreds of specific death threats from U.S. military militants. That is not unusual, and we have become practiced from past experiences at ignoring such threats from Islamic extremists, African kleptocrats and so on," he said.

"Recently the situation has changed with these threats now extending out to our lawyers and my children," he added. "However, it is the specific calls from the elites of U.S. society for our assassination, kidnapping and execution that is more concerning."

Assange is wanted in Sweden to face allegations of sexual offenses against two women, charges he denies, but the United States nor any other country has lodged any charges against him over the leaked documents.

Australia would give consular help to Assange if he is arrested abroad and he is entitled to return home as well, Australian Attorney General Robert McClelland said Monday. But he also condemned the leaks as harming security and said Australia is obligated to help the criminal investigation of Assange's activities.

"Free speech is one thing, we all respect that, but we also respect the freedoms and the rights of people to live without fear," McClelland told reporters.

In the Swedish case, Assange is the target of a European extradition process which normally takes months to produce an arrest.