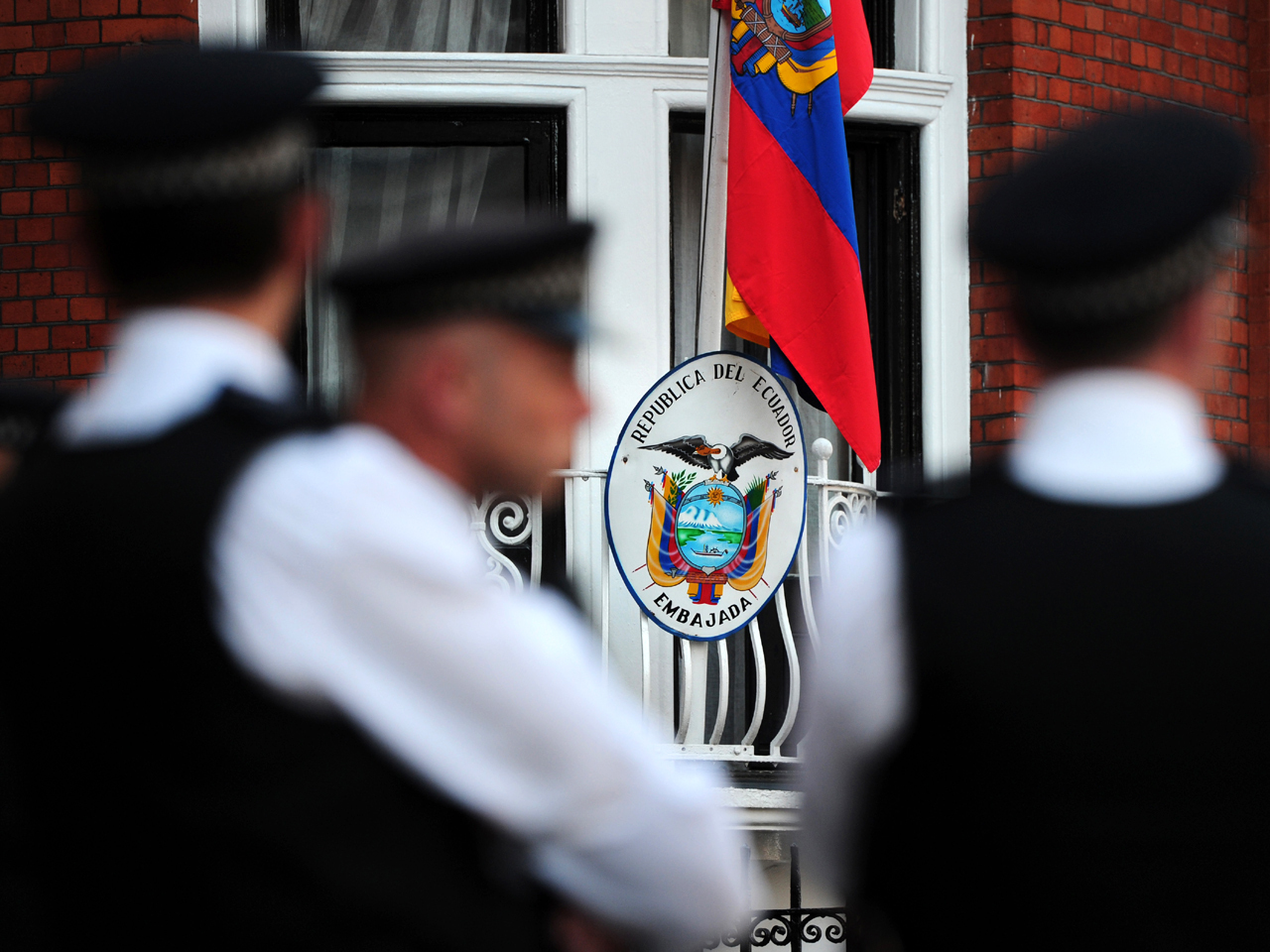 Embassy officials told CBS News correspondent Charlie D'Agata last week that they have repeatedly offered Swedish investigators opportunities to question Assange at the embassy, but those offers have been turned down.

Kristinn Hrafnsson, a WikiLeaks spokesman, said that Assange planned to speak later to mark the two month anniversary since he took refuge inside the Latin American nation's mission on June 19, but declined to provide details on what the activist intended to say.

Assange's appearance will provide his first comment since Ecuador on Thursday granted him diplomatic asylum, a move Ecuadorean President Rafael Correa said was aimed at sheltering the 41-year-old Australian from any future attempt by the United States to prosecute the activist over his WikiLeaks work.

Britain has said it will not grant Assange safe passage out of the U.K., insisting that it must follow the law and deliver him to Sweden on a binding European arrest warrant.

While Assange remains inside Ecuador's embassy — which is protected by diplomatic privileges — he is out of reach of British authorities.

If he steps foot outside the mission, he faces immediate detention by the dozens of British police who surround the building and are stationed inside a shared lobby.

A workman was seen Sunday preparing a large window at the embassy, prompting expectation that Assange would address supporters and television crews from a small balcony — which legally remains part of Ecuador's mission.

Ex-Spanish judge Baltasar Garzon, who is representing Assange, met with the activist inside the embassy and told reporters that the Australian remains determined.

"I have spoken to Julian Assange, and I can tell you that he is in fighting spirit. He is thankful to the people of Ecuador and especially to President Correa for granting him asylum," said Garzon. "He has always fought for the truth and justice, he has always defended human rights and will continue to do so. He demands that WikiLeaks and his own rights also be respected."

Garzon said that Assange had "instructed his lawyers to carry out legal actions to protect the rights of WikiLeaks, Julian himself, and all those who are currently being investigated," but did not offer any further explanation.

He also said that Ecuador could consider making an appeal to the International Court of Justice in the Hague in order to compel Britain to grant Assange safe passage out of the country.

Garzon is currently appealing his own conviction in Spain for overstepping his jurisdiction in a domestic corruption probe.

Assange shot to international prominence in 2010 when his WikiLeaks website began publishing a huge trove of American diplomatic and military secrets — including 250,000 U.S. embassy cables that highlight the sensitive, candid and often embarrassing backroom dealings of U.S. diplomats.

As he toured the globe to highlight the disclosures, two women accused him of sex offenses during a trip to Sweden.

Assange and his supporters claim the Swedish case is merely the opening gambit in a Washington-orchestrated plot to make him stand trial in the U.S. over his work with WikiLeaks — something disputed by both Swedish authorities and the women involved.

Correa said on his weekly broadcast that Ecuador had offered Assange refuge specifically because of the purported threat of a prosecution in the U.S. He said Ecuador "never wanted to impede the investigation of a supposed crime. What we wanted to impede is the extradition to a third country."

A Virginia grand jury is studying evidence that might link Assange to Pfc. Bradley Manning, the U.S. soldier who has been charged with aiding the enemy by passing the secret files to WikiLeaks and is awaiting trial. No action against Assange has yet been taken.

Hrafnsson said that supporters hope Sweden can be convinced to offer the activist an assurance that it would not agree to any future request by the U.S. to extradite Assange there.

"It would be a basis for negotiation for a solution if Sweden gave a guarantee," he said.

Lawyers say Sweden could not legally give such an assurance.

Tensions have risen between London and Quito over Assange, after Britain appeared to suggest it could invoke a little-known law to strip Ecuador's embassy of diplomatic privileges — meaning police would be free to move in and detain the activist.

Correa said that Britain's "direct threat" about possibly entering the embassy had come "in a totally offensive, inconsiderate, intolerable manner."

British diplomats accuse Ecuador of deliberately misinterpreting its attempts to explain its legal options. Foreign Secretary William Hague has said Britain is seeking an amicable solution to the standoff in talks with Ecuadorean officials.