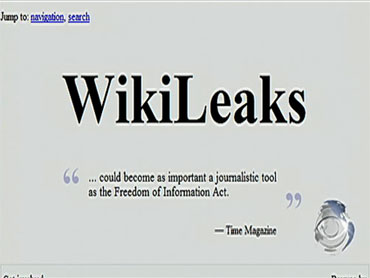 White House press secretary Robert Gibbs suggested at his briefing today that while the Obama administration condemns Wikileaks' release of secret government documents, the release does not diminish the United States' role as a leader in global affairs.

Gibbs opened the briefing by stating that President Obama was "not pleased" by the release, calling his characterization of the president's position an "understatement." Reporters were soon pressing Gibbs on whether the administration was playing down the issue, suggesting that the White House was not using the sort of harsh rhetoric it had in the past. Mr. Obama did not mention the Wikileaks situation in his remarks earlier in the day.

Gibbs said that while "the stealing of classified information and its dissemination is a crime," he doesn't believe "the release of these documents impacts our ability to conduct a foreign policy that moves our interests forward."

He told CBS News chief White House correspondent Chip Reid that he wasn't trying to downplay the issue but seeking to stress that "the release of these documents does not change our posture and our effort in seeking to contain that terrorist threat."

"...a breach of these type of discussions is decidedly not good," Gibbs said. "That does not, however, change the fact that we have a series of problems that have to be addressed on the world stage. It is hard to imagine progress on those issues without American leadership moving us forward."

Questions are being raised about whether other countries will be less candid than they have been previously with American diplomats out of concern that their comments will be made public. The White House appears to be trying to limit the perception that the release weakened America abroad while still condemning the release itself.

Gibbs told reporters today that he does not believe "we could afford to let [the Wikileaks release] greatly impact our ability to pursue a foreign policy that's in our interest and in the interest of the world."

At the same time, he insisted that "this administration thinks it's a big deal." He said "those that have been involved in the stealing of and the dissemination of this information are criminals."

Gibbs said he "wouldn't rule anything out" when it comes to legal action against Wikileaks, stating that in addition to an ongoing criminal investigation the administration is looking at "a whole host of" options. Attorney General Eric Holder has said he will prosecute anyone who violated U.S. laws in conjunction with the Wikileaks release.

He also said the White House is trying to strike a balance between "need to know and the need to share."

While "we want soldiers on the front lines of battle to have the most up to date intelligence," he said, controls need to be in place to ensure that the information does not fall into the wrong hands.

Secretary of State Hillary Clinton said earlier in the day that the Defense Department is taking steps to make it harder to steal classified information. She cast the release as more damaging than did Gibbs, stating that it "undermines our efforts to work with other countries to solve shared problems."

Gibbs also signaled that there are limits to the United States' ability to keep secret information secret.

"...regardless of the walls that you set up, there are certainly going to be occasions in which people do not take their oath to the country seriously about protecting the access that they have or the information that they're given that is either sensitive or highly classified," he said.

Hoekstra on WikiLeaks: "A Number of Time Bombs"

The US Embassy Cable (Guardian)

A Superpower's View of the World (Spiegel, in English)

Biden says monkeypox cases something to "be concerned about"
Brian Montopoli