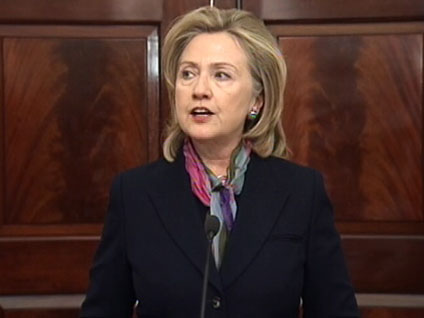 The massive leak of secret U.S. State Department cables via the website Wikileaks has revealed some candid -- and potentially embarrassing -- assessments from American diplomats around the world. The leak has disrupted the diplomatic process, Secretary of State Hillary Clinton said today -- but those particular leaks don't represent anything unusual.

"In my conversations at least one of my counterparts said to me, 'Well, don't worry about it, you should see what we say about you,'" Clinton said in a press conference today.

The secretary of state has been working the phones over the last few days to ensure that U.S. relations abroad remain in tact in the wake of the leaks.

Wikileaks says it is incrementally publishing classified State Department documents, some of which reveal the sort of raw commentary diplomats often share with policy makers in Washington but that are kept secret to maintain public relationships. For instance, one cable reportedly described German Chancellor Angela Merkel as "risk averse and rarely creative."

Clinton insisted that the comments in the released cables do not represent official U.S. positions.

"Our official foreign policy is not set through these messages but here in Washington," she said. "Our policy is a matter of public record as reflected in our statements and our action around the world." She added, however, "It is imperative we have candid reporting from those who are in the field... in order to inform our decision making back here in Washington."

The United States' diplomatic relationships around the world are strong enough to withstand the fallout of the leaks, Clinton said. However, she said the enormity of the leaks cannot be overlooked.

Clinton said the release of more than a quarter million classified State Department documents is more than just an attack on America's foreign policy interests.

"It is an attack on the international community, the alliances and partnerships, the conversations and negotiations that safeguard global security and advance economic prosperity," she said.

One of the cables revealed shared concern about Iran's potential nuclear capabilities among Arab leaders -- concerns those leaders would be reticent to share in public.

Clinton said, however, "I think it should not be a surprise to anyone that Iran is a source of great concern not only in the United States." She added that the leaks show "the concern about Iran is well-founded, widely shared, and will continue to be at the source of the policy that we pursue with like-minded nations to try to prevent Iran from acquiring nuclear weapons."

This is why the international community imposed sanctions against Iran, she continued. "It did not happen because the United States went out and said, 'Please do this for us.'"

Other leaks, meanwhile, may harm those in the U.S. and elsewhere whose confidential conversations were revealed, Clinton said.

"U.S. diplomats meet with local human rights workers, journalists, religious leaders and others outside of government who offer their own candid insight," she said. "For example, if an anti-corruption activist shares information about official misconduct, or a social worker passes along documentation of sexual violence, revealing that person's identity could have serious repercussions: imprisonment, torture, even death."

"There is nothing laudable about endangering innocent people, and there is nothing brave about sabotaging the peaceful relations between nations on which our common security depends," Clinton said.

While Clinton said disclosures like these "tear at the fabric of good government," she added that the Obama administration is proud of the relationships it has built up over the past 22 months. "I would hope that we will be able to move beyond this and back to the business of working together on behalf of our common goals," she said.

Clinton gave her remarks before embarking on a four-nation diplomatic tour in Central Asia and the Persian Gulf, where she said she will continue communicating with her international counterparts to preserve relationships with them.

More on the Wikileaks document release:

Biden says monkeypox cases something to "be concerned about"
Stephanie Condon