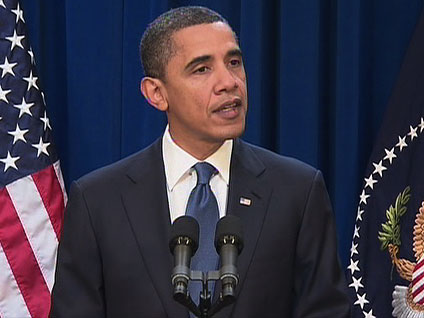 President Obama today proposed a two year freeze in civilian pay for federal employees that the White House says will save $2 billion in fiscal year 2011 and more than $60 billion over the next decade.

"The hard truth is getting this budget under control is going to require some broad sacrifice, and that sacrifice must be shared by employees of the federal government," he said.

"After all, small businesses and families are tightening their belts," added the president. "Their government should, too."

The freeze will apply to all civilian federal employees - including, as the White House noted, doctors who care for wondered veterans, national parks workers, Department of Defense employees and other federal workers - but not military personnel.

Congress is not covered under the proposal, though members voted to freeze their own pay at $174,000 last April.

The White House stressed that the freeze was not meant to punish or disrespect federal workers, but merely to have them do their part to help address the budget deficit. Mr. Obama said he did not reach the decision easily.

"This is not just a line item on a federal ledger," he said. "These are people's lives."

The move was embraced by top Republicans and criticized by labor leaders like AFL-CIO President Richard Trumka, who said in a statement that the proposal "is bad for the middle class, bad for the economy and bad for business."

American Federation of Government Employees president John Gage told the Associated Press that the move was "a slap at working people." He suggested federal employees were being made into scapegoats.

"Working people's wages are not the issue with this deficit or what is going on in our country,'' he told the AP.

Under the president's proposal, a federal worker promoted to a higher pay scale would still get a pay raise.

Congress must act to put such a freeze into effect. Much like the Republicans' earmarks ban, the move would not make a significant dent in budget deficit, which hit $1.3 trillion in the most recent budget year. Lawmakers on both sides of the aisle are eager to show they are serious about fiscal discipline as concerns grow about the federal debt and deficit.

White House Press Secretary Robert Gibbs said at his briefing following the announcement that the freeze was not merely symbolic. Gibbs said the proposal would save $5 billion over two years, "a decent chunk of change."

Jeffrey Zients, a deputy director at the Office of Management and Budget, said on a conference call with reporters that the effort to freeze federal pay "is the first of many difficult steps ahead."

Republicans have called for federal pay freezes (and even brief furloughs for federal workers), and the bipartisan federal deficit commission is expected to call for a pay freeze when it releases its recommendations this week. (A proposal from the commission chairmen called for a three-year freeze.)

"Those of us who have been charged to lead will have to confront some very difficult decisions," Mr. Obama said, pointing to the upcoming release of the deficit commission's report. He said the decisions were ones lawmakers have "put off for a long time."

The appearance marked the president's his first public appearance since getting stitches in his lip from a basketball injury. He opened his remarks with a joke on how Washington is known for "sharp elbows," a reference to his injury, before adding that things have gotten somewhat "carried away."

"For those of you who are worried about my lip I should be OK, doctors have been giving me a clean bill of health," the president continued. He noted that he had played basketball since the injury with daughters Sasha and Malia, who he said "took it easy on me" because of the injury.

Mr. Obama also referenced Tuesday's planned meeting with Congressional leaders from both parties, where he said he planned to discuss his efforts to ratify the new START treaty with Russia as well as how to extend the Bush-era tax cuts. He called for cooperation, arguing that it "would be unwise" for Republicans to assume that the American people "prefer one way of thinking over another." That, he said, was not the lesson to take from the midterm elections.

"We're going to have to budge on some deeply held positions and compromise for the good of the country," he said, calling on lawmakers to "set aside the politics of the moment to make progress for the long-term."

Mr. Obama did not mention the Wikileaks documents dump that has caused diplomatic headaches for the United States around the world.