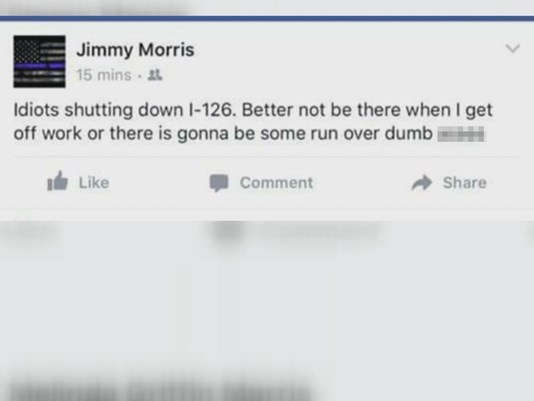 COLUMBIA, S.C. -- A white fire department captain in South Carolina's capital who was fired for posting on social media that he would run over protesters if they were still blocking traffic when his shift ended has filed a lawsuit alleging racial discrimination.

The State reported Tuesday that in a lawsuit pending in federal court, former Columbia Fire Department Capt. Jimmy Morris contends Columbia fired him because of his race and violated his free speech rights.

Morris wrote two Facebook posts in July 2016 saying he would run over protesters if they were blocking traffic when his shift ended.

"As the City Manager, there are specific types of behavior and actions that I will not tolerate," she wrote. "Any actions taken to communicate or demonstrate a lack of respect for the lives and safety of others falls into the category of "zero tolerance".  Every man and woman who is employed by the City of Columbia is officially an ambassador for the City.  Our employees represent the City of Columbia not only while they are in the workplace, but also while they are engaging with others in the community."

In July, 2016, Black Lives Matter protesters closed an intersection near the Statehouse and prompted the closing of a section of interstate. Those were among dozens of protests nationwide against police violence that came after blacks were killed by officers in Minnesota and Louisiana.