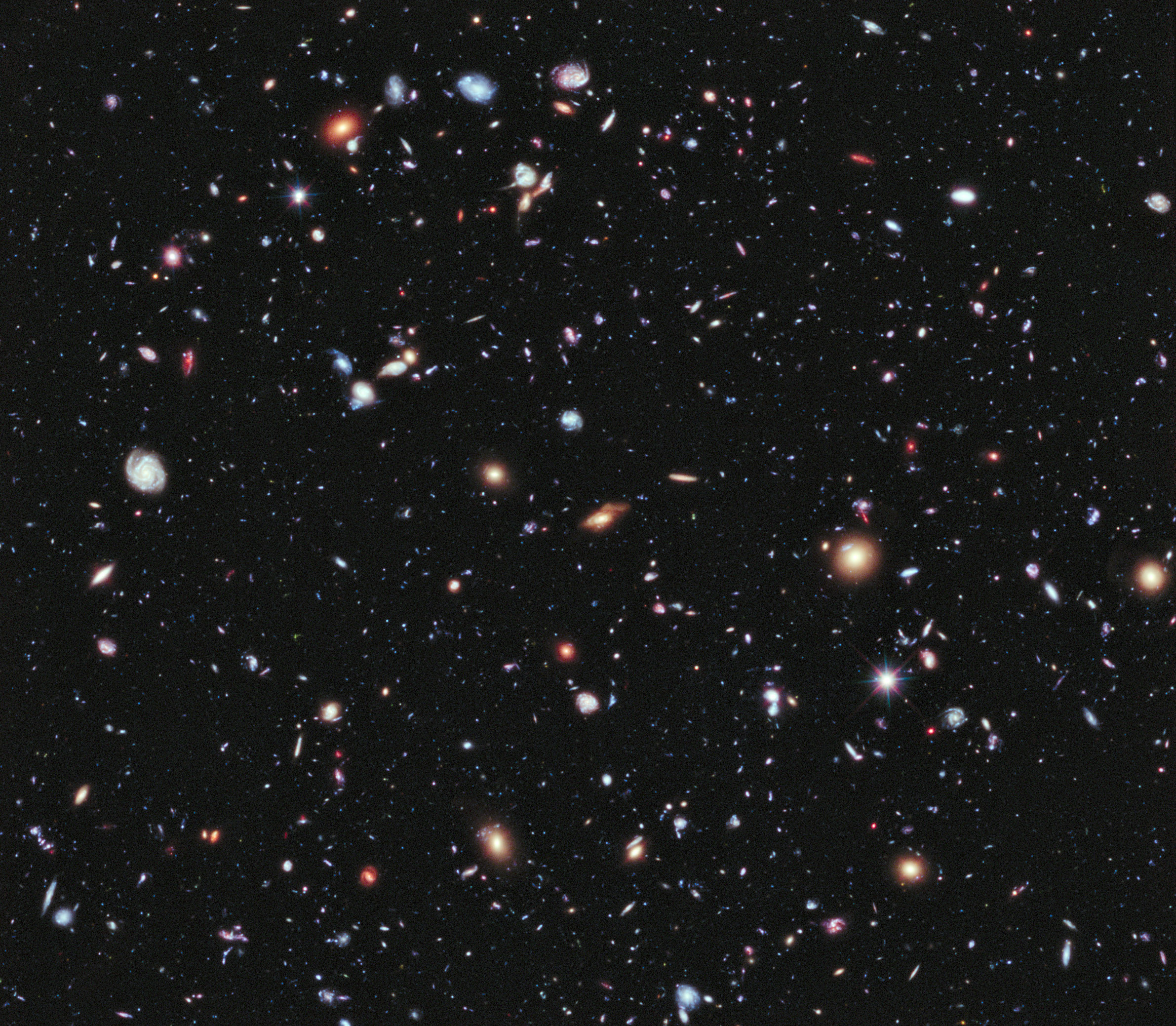 Paul Sutter is an astrophysicist at The Ohio State University and the chief scientist at COSI Science Center. Sutter is also host of the podcasts Ask a Spaceman and RealSpace, and the YouTube series Space In Your Face.

Well, our universe does have an edge -- that is, if by "our universe," you mean the observable universe. The speed of light is just that -- a speed -- and the universe has only been around for so long (about 13.77 billion years), which means only so much of the universe has been revealed to us via the light that has traveled those vast cosmic distances. And what's outside our observable limit? That one's easy: It's just more stuff, like galaxies and black holes and new, fantastic varieties of cheese. It's forever unreachable by us, sure -- but it's still over there. [Our Expanding Universe: Age, History & Other Facts]

From our perspective, it looks like we're at the center of everything, and every single galaxy is flying away from us. So that, naturally, leads to the "There's got to be an edge" line of reasoning. But let's say you hopped over to Andromeda, our nearest galactic neighbor. From that new vantage point, it still looks like you're at the center of the universe and everything is flying away from you. Now let's go really crazy and pretend we can teleport you to the most distant observable galaxy, on the far edge of our observational reach. Guess what? Yup, from your position, it looks like you're at the center of the universe, and every galaxy -- including the distant Milky Way -- is racing away from you.

That's what we mean when we say "The universe is expanding." Every galaxy is receding from every other galaxy (with a few minor exceptions from local mergers, but that's the subject of another article).

But there's got to be a limit, right? It's not like the universe is infinite, right? Right?

Well, probably not. While it is very, very, very large, the universe is not likely infinitely big.

But it still doesn't need an edge.

Think again about hopping from galaxy to galaxy. From the Milky Way, the universe looks like an enormous soap bubble growing in size, with us at the center. But from another galaxy, this universal bubble looks different, because there's a different galaxy at the "center" of the bubble. What we might be tempted to call an "inside" or an "edge" of our universe is meaningless from the new perspective. And that's true for every single galaxy.

I'll say it again: "Expanding universe" just means every galaxy is moving farther apart from every other galaxy. That's it! No edge. No bubble. Nothing to expand into. The math is simple: The universe gets bigger with time. And that's it.

Let's take a step back. Everyone knows those common analogies used to describe an expanding universe: Galaxies are like ants crawling around on a beach ball. We're all raisins in a loaf of bread. And -- oh! -- the beach ball is inflating! Yes! The loaf of bread is rising in the oven! Space is expanding, and the galaxies are carried along with it! See? Easy!

Those analogies certainly get across an important point: The galaxies aren't flying or shooting or waltzing away from each other. It's the space underneath them that's doing all the work of expanding; the galaxies are just along for the cosmic carpet ride.

But those analogies also carry a fatal flaw. We can all easily imagine an inflating beach ball or a rising loaf of bread, and we immediately think of them as expanding into something: empty air. The beach ball has a skin. The loaf has a delicious, crunchy crust. They have edges, and they're moving into something.

Our minds have played a trick on us, and it's cheating us from being fully awestruck at what's going on.

In the beach ball model, our entire universe is a two-dimensional surface, full of idiot ants trying to crawl toward each other but failing because some jerk keeps inflating it. OK, fine, whatever. That model universe is two-dimensional, but in our mind's eye, we immediately think of it expanding into a third dimension -- a dimension that the ants can't access, because they can't jump. But that extra dimension provides a "place" for the surface of the ball to expand into.

But our real universe is three-dimensional. While string theory suggests there might be extra dimensions, they're all supertiny, so those don't count. So is there a fourth extra dimension that provides the "stuff" for our universe to expand into?

Maybe, maybe not. Here's the thing: The mathematics could support a fourth dimension for our 3D universe to expand into. And we would definitely have an "edge" in this extra dimension, the same way you can point to the "edge" of a 2D beach ball surface.

But it doesn't have to.

We don't need a fourth dimension to wrap around our universe. We have a complete and consistent mathematical description of the expansion of the universe using only the normal, workaday three dimensions that we know and love. So that means we can have an expanding universe without needing an edge or a thing for it to expand into.

I'll admit I have trouble wrapping my head around this concept. But that's the beauty of using mathematics to understand the universe: We can create and manipulate concepts that our brains simply couldn't handle on their own!

Learn more by listening to the episode "What's the Point in Talking About Science?" on the Ask A Spaceman podcast, available on iTunes and on the web at http://www.askaspaceman.com. Ask your own question on Twitter using #AskASpaceman or by following Sutter@PaulMattSutter and facebook.com/PaulMattSutter.

Follow all of the Expert Voices issues and debates -- and become part of the discussion -- on Facebook, Twitter and Google+. The views expressed are those of the author and do not necessarily reflect the views of the publisher. This article was originally published on Space.com.