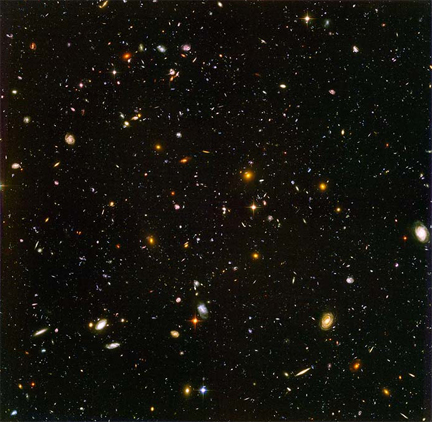 WASHINGTON -- Astronomers thought they had a handle on how the universe ticks, but the cosmos may be toying with them.

A team of astronomers has calculated that the universe seems to be expanding faster than what scientists previously figured. If the new research is right, then science's basic understanding of what's been happening to the universe in the past 13.8 billion years after the Big Bang could be just a bit off kilter.

"This is really an end-to-end test the universe gives us; it's sort of our final exam," said Nobel laureate and study lead author Adam Riess of the Space Telescope Science Institute . "We get a D-plus probably because things don't match up."

Astronomers used the Hubble Space Telescope to measure the distance of 2,400 stars to calculate the rate the universe is expanding. The number they came up with is 5 to 9 percent faster than other scientifically accepted measurements that calculate the expansion rate based on cosmic background radiation from 380,000 years after the Big Bang. The new study was released Thursday by NASA and is to be published in The Astrophysical Journal.

Either one set of calculations is wrong - which outside scientists say is the most likely possibility, though they can't find something wrong yet - or the expansion rate has speeded up since 13.8 billion years ago. And if that's the case, as Riess advocates, then our understanding of the universe is not quite right.

It's as if we're looking for someone and we're in the right room, but looking at the wrong wall, said Riess, who won the 2011 Nobel in physics for proving in 1998 that the universe is accelerating. So now Riess and many of the same scientists are trying to figure just where astronomy made a wrong turn.

Or it could be the measurements are off.

"There's potentially something very exciting, very interesting that the data are trying to tell us about the universe," Filippenko said.

NASA astrophysicist John Mather, Princeton astrophysicist David Spergel and California Institute of Technology physicist Sean Carroll say while it's possible that we have to go back to the cosmological drawing board, it's far more likely that one of the two expansion rate measurements was calculated wrong somehow.

"It's far too early to jump up and down to say the universe is messing with us," Carroll said, but then he added that both measurements were by solid and careful scientists.