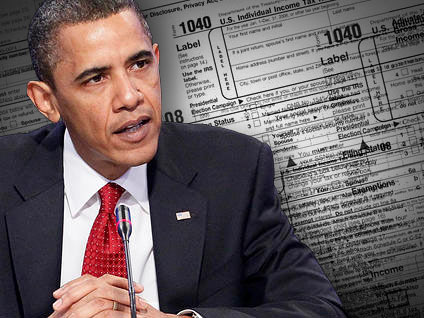 When President Obama outlined his 2011 budget proposal in February, he said government cannot "continue to spend as if deficits don't have consequences... as if the hard-earned tax dollars of the American people can be treated like Monopoly money."

On April 15, after laboring through their taxes, many Americans may be asking if the president meant what he said. More than three quarters of Americans, according to a CBS News/ New York Times poll released that same month, thought the Obama administration has either kept taxes the same for most Americans or increased them. The latest CBS News/ New York Times poll released yesterday shows that as many as 34 percent of Americans think Mr. Obama raised taxes.

Today, thousands of Tea Partiers will descend on Washington to declare they've been "Taxed Enough Already." Yesterday's poll found that 64 percent of Tea Party supporters think the administration has raised taxes -- a finding that might leave Democrats banging their heads against their desks.

Reid was referring to the impact of the American Recovery and Reinvestment Act, otherwise known as the stimulus -- essentially, the only Obama policy to really impact people's 2009 tax returns. In fact, tax refunds reached an all-time high this year in part because of the stimulus, the president said in his weekly address on Saturday. Meanwhile, taxes are at their lowest levels in 60 years, according to William Gale, co-director of the Tax Policy Center and director of the Retirement Security Project at the Brookings Institution.

"The relation between what is said in the tax debate and what is true about tax policy is often quite tenuous," Gale told Hotsheet. "The rise of the Tea Party at at time when taxes are literally at their lowest in decades is really hard to understand."

Skepticism surrounding the president's tax policies likely stem from a variety of factors: First, it's simply harder to open one's wallet for the government during a recession, and some state and local tax increases added to some people's burden. Additionally, many Americans may be more concerned with potential tax increases in the future. On top of all that, it can simply be hard to have a firm understanding of what's going on in Washington from the hyper-partisan rhetoric often used to talk about taxes.

Here's a look at what the president did for your tax return in 2009, what he may do in the future and whether it all adds up.

One third of the Recovery Act was made up of tax credits, the White House emphasizes.

"No one I've met is looking for a handout," Mr. Obama said in his address Saturday. "And that's not what these tax cuts are. Instead, they're targeted relief to help middle class families weather the storm, to jumpstart our economy, and to bring the fundamentals of the American Dream -- making an honest living, earning an education, owning a home, and raising a family -- back within reach for millions of Americans."

Even conservative advocacy group Americans for Tax Reform, which advocates for a single, national flat tax rate, found some praise for the Recovery Act -- specifically for provisions allowing small businesses to write off a wider range of business expenses.

While most Americans said in yesterday's CBS News/ New York Times poll that they paid a fair amount of taxes this year, Tea Party activists are less satisfied. And conservative economists are quick to point out that a sizable portion of the Recovery Act's tax credits went to people who already had zero or less than zero income tax liability. Nearly half of Americans who file federal income tax returns do not pay any federal income taxes, the Heritage Foundation reports.

"We know those are the right people to get tax relief if we want to see wider economic effects," said Michael Linden, associate director for tax and budget policy at the Center for American Progress. "If you give additional resources to low and middle income people they spend it, because they have no option."

Nevertheless, conservatives see a trend they don't like -- piling more taxes onto a smaller share of the population.

What to Do If You Can't Get Your Tax Return In on Time
Five Lessons From Your '09 Tax Return
Tax Day Resources from MoneyWatch.com

What Tax Policies is Obama Advocating for the Future?

People may, in part, think their taxes went up last year because they are looking prospectively, conservatives say.

Gerald Prante, a senior economist for the Tax Foundation, a non-profit, non-partisan tax research organization, said these tax increases would likely only directly impact about 2 to 3 percent of tax returns.

Curtis Dubay, a senior policy analyst at the Heritage Foundation, added that the wealthy already pay "the lion's share of all taxes."

"You have a serious problem of how are taxes are distributed," he said. "The left is trivializing it by saying you can raise taxes on the rich."

You can raise taxes on the rich, Linden countered, because the economic growth that happened during the Bush administration was concentrated at the top. Letting the tax cuts expire for the wealthy would help pay down the deficit with little economic effect, he said.

"We're talking about going back to rates that existed under Bill Clinton. It's not as if that was a bleak economic period," Linden said. "We had eight years under President Clinton who raised taxes. Everybody said it would destroy the economy, and all we got was incredible economic growth and a balanced budget."

What About Health Care?

It's not just the wealthy, however, concerned about tax increases.

"People see the massive spending [of the administration], and they correlate high spending and high deficits with future tax increases," Dubay from the Heritage Foundation said. "I think that's where a lot of the anger comes from for the Tea Party."

Mr. Obama's health care reforms, which go into effect over the next few years, are often cited as the prime example of a policy that will lead to higher taxes. The president himself says it includes "the largest middle class tax cut for health care in history," referring to the tax credits lower-income people will get to purchase insurance. "One thing we have not done is raise income taxes on families making less than $250,000," he said Saturday.

While there were no middle class income taxes in the legislation, it still raises revenue from the middle class. For instance, the individual mandate, which requires all Americans to purchase health insurance starting in 2014, was fashioned as a "tax." Middle class earners will also be hit by the provision limiting medical expense deductions.

Republicans have protested that the health care reforms will include more than $500 billion in new "taxes." Supporters of the legislation say that the costs imposed on the middle class will be balanced out by the benefits received, including subsidies. Families making more than $250,000 per year will be hit with a 3.8 percent tax on investment income.

"It's almost exclusively high income households" that will see tax increases because of the health care bill, said Gale of the Brookings Institution.

Even with all the significant policy changes this administration is responsible for, from the stimulus to health care, the public's perceptions of President Obama's tax policies are indisputably at least partially attributable to partisanship.

CBS News polls from this year show conservatives are more likely than Americans overall to think President Obama raised their taxes. Prante of the Tax Foundation said that during the Bush years, he conducted research on similar polls asking Americans if they supported tax cuts.

"When you mention the word 'Bush,' the party split widened significantly," he said.

Meanwhile, politicians have no qualms about using extreme political messaging that plays off of people's already-established ideas. While the rhetoric can sometimes cross the line, both political parties are skilled at pushing the envelope without all together abandoning the facts. A recently released video from the Republican National Committee dramatizes the taxes in the health care bill.

"Sneezing: taxed," says a narrator while the words "tax on allergy medicine" appear in the video. "Breathing: taxed," the narrator says, while the video shows the message, "tax on oxygen tanks."