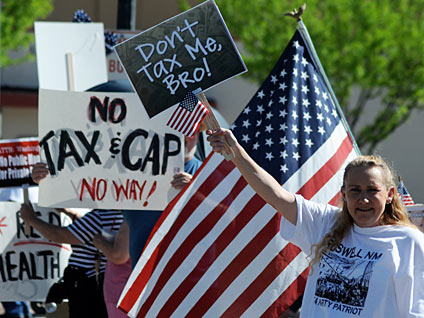 They're white. They're older. And they're angry.

CBS News and the New York Times surveyed 1,580 adults, including 881 self-identified Tea Party supporters, to get a snapshot of the Tea Party movement. There is a lot of information to unpack; let's begin with the demographics.

Eighteen percent of Americans identify as Tea Party supporters. The vast majority of them -- 89 percent -- are white. Just one percent is black.

They tend to skew older: Three in four are 45 years old or older, including 29 percent who are 65 plus. They are also more likely to be men (59 percent) than women (41 percent).

They are better educated than most Americans: 37 percent are college graduates, compared to 25 percent of Americans overall. They also have a higher-than-average household income, with 56 percent making more than $50,000 per year.

More than half (54 percent) identify as Republicans, and another 41 percent say they are independents. Just five percent call themselves Democrats, compared to 31 percent of adults nationwide.

They are more likely than American adults overall to attend religious services weekly (38 percent do so) and to call themselves evangelical (39 percent). Sixty-one percent are Protestant, and another 22 percent are Catholic.

More than three in four Tea Party supporters (78 percent) have never attended a rally or donated to a group; most have also not visited a Tea Party Web site.

For the purposes of the poll, those who have attended a rally or donated to a group have been deemed Tea Party "activists." Four percent of Americans fall into this category.

Tea Party activists tend to be even angrier, more pessimistic about the country and more negative about President Obama than other Americans who identify as part of the Tea Party movement. For a breakdown of the beliefs of these activists, click here.

Fifty-three percent of Tea Party supporters describe themselves as "angry" about the way things are going in Washington, compared to 19 percent of Americans overall who say they are angry.

Asked what they are most angry about, the top four answers among Tea Party supporters who identify as angry were the health care reform bill (16 percent), the government not representing the people (14 percent), government spending (11 percent) and unemployment and the economy (8 percent).

Only one percent of Tea Party supporters approve of the job Congress is doing, compared to 17 percent of Americans overall.

Asked what socialism means, roughly half of Tea Party supporters volunteered government ownership or control, far more than any other answer. Eleven percent cited taking away rights or limiting freedom, and eight percent said it means the redistribution of wealth.

Thirty percent of Tea Party supporters believe Mr. Obama was born in another country, despite ample evidence to the contrary. Another 29 percent say they don't know. Twenty percent of Americans overall, one in five, believe the president was not born in the United States. (More on this part of the poll here.)

Tea Party supporters were asked in the poll what they thought of a few notable figures. The most popular was Sarah Palin, who is viewed favorably by 66 percent of people in the movement. Only 40 percent, however, believe she would be an effective president, a smaller percentage than Republicans overall.

Tea Party Supporters on the Issues

They are more likely than Republicans and Americans overall to see illegal immigration as a serious problem (82 percent), doubt the impact of global warming (66 percent) and call the bank bailout unnecessary (74 percent).

(At left, watch CBS News correspondent Dean Reynolds' report on the tea party and the poll.)

Ninety-three percent describe the economy as at least somewhat bad, and 42 percent say it is getting worse. Fifty-eight percent believe America's best years are behind us when it comes to good jobs, compared to 45 percent of Americans overall.

Just ten percent say the stimulus package had a positive effect on the economy (compared to 32 percent of Americans overall), while 36 percent say it actually made things worse. More than half say it had no impact.

Eighty-nine percent say the president has expanded the role of government too much. More than three in four say lowering the federal government is more important than government spending to create jobs.

And while the vast majority opposes the health care reform bill, 62 percent say programs like Social Security and Medicare are worth the costs to taxpayers. (The figure is even higher among Americans overall, at 76 percent.)

Tea Party supporters are less likely than Americans overall to believe whites have more opportunities to get ahead than blacks.

Fifty-two percent believe too much has been made of the problems facing black people. Far fewer Americans overall -- 28 percent -- believe as much. Among non-Tea Party whites, the percentage who say too much attention has been paid to the problems of black people is 23 percent.

More on the Poll: