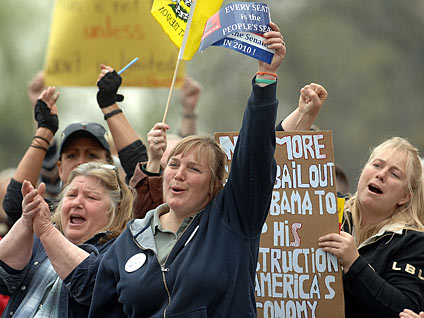 Tea Party "activists," defined as those who have attended a rally or donated money to the movement, make up a small portion of the group, but they are even more pessimistic about the direction of the country, and more negative about President Obama, than Tea Partiers overall, a new CBS News/ New York Times poll shows.

These activists make up 20 percent of Tea Party supporters and 4 percent of Americans overall.

This group has an especially gloomy outlook on the economy; 62 percent of them say it is getting worse, and more than six in 10 say when it comes to the availability of good jobs for American workers, America's best years are behind us.

More than half of Tea Party activists (55 percent) say the amount of income tax they have to pay this year is unfair. Among Tea Partiers as whole, 42 percent feel that way.

Twenty-four percent of Tea Partiers think violent action against the government could be justified, but that number rises to 32 percent among Tea Party activists.