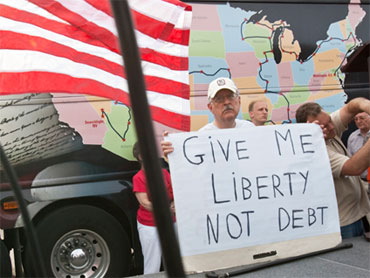 Tea party activists aren't just a "bunch of yahoos who make a lot of noise" and are instead a "force to be reckoned with" for both Democrats and Republicans, "Face the Nation" moderator Bob Schieffer said on "The Early Show" Thursday.

"I think the most important thing about this poll is we now have some sense of just how large a group this is. It represents about 18 percent of the voting public. That is a force to be reckoned with," Schieffer told "Early Show" co-anchor Harry Smith.

"One thing the polls also show, this is not just a bunch of yahoos who make a lot of noise. We're seeing they're actually more educated than Americans in general. These are people who seem to have a legitimate anger building ... and I think that is the thing that both parties have to worry about."

For Republicans, there is the danger that the Tea Party could break off and form its own party, creating a situation similar to the 1992 presidential election when Ross Perot siphoned off votes from George Bush, allowing Bill Clinton to win, Schieffer said.

But the Tea Party represents a more immediate foe for incumbents, particularly Democrats.

"This is the core anti-Obama, anti-incumbent vote out there. These people are to the right of Republicans. But they really don't like Barack Obama. They don't like his programs. And they like Congress even less. This is somebody that everybody has to worry about if you're in politics and in office right now."

Tea Partiers rallied Wednesday in Boston and plan to hold hundreds of events throughout the country to coincide with tax day, including one in Washington, D.C.

Tea Party: Who are They and what do they Believe?

O'Rourke to Abbott at Uvalde presser: "You are doing nothing"
Thanks for reading CBS NEWS.
Create your free account or log in
for more features.
View CBS News In
CBS News App Open
Chrome Safari Continue
Be the first to know
Get browser notifications for breaking news, live events, and exclusive reporting.