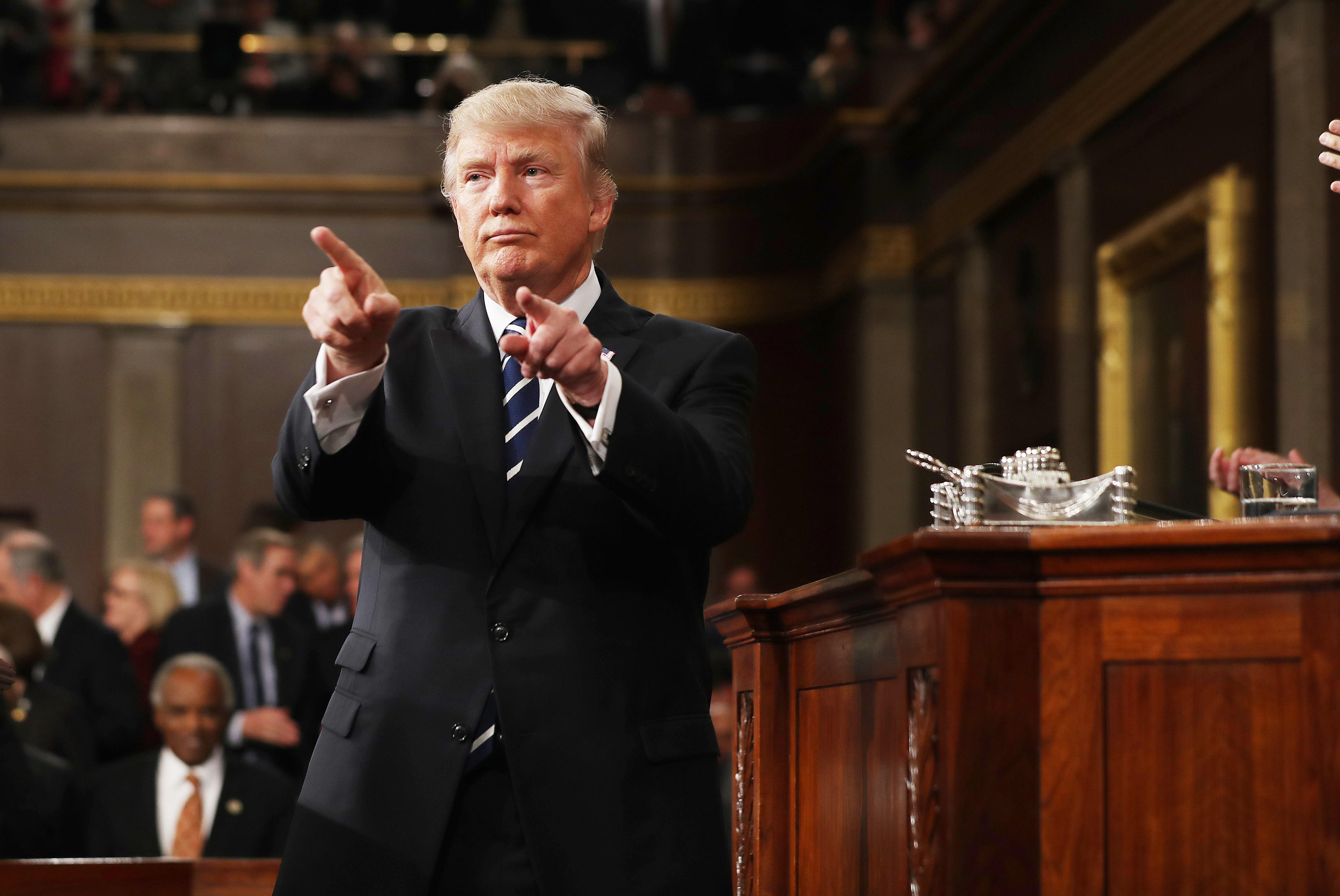 Next week, we will see President Trump give his first formal State of the Union address. And with the midterm elections rapidly approaching, he's sure to use the much-watched opportunity to promote his agenda before a national audience.

But what, exactly, will he say? We can't know for certain, but a look at CBS News polling data helps give an indication of the notes he'll try to hit.

It's the economy, stupid

Mr. Trump is not popular. In fact, if anything, he's consistently unpopular, with his approval rating roughly unchanged since the summer.

Just 37 percent of voters say they approve of Mr. Trump's performance after one year in office, according to the most recent CBS News poll. To put that number in perspective, his approval rating is lower than any of his five most recent predecessors at this stage of their presidencies.

However, Mr. Trump does have one big thing going for him: the economy. The president frequently touts the awesome performance of the stock market in the year since he took office and will almost certainly make mention of this fact when he gives his State of the Union next Tuesday.

Still, a majority of Americans – 53 percent – say that Mr. Trump's policies haven't had much effect on themselves and their families. So it's fair to expect the president to highlight how a roaring economy, not to mention tax cuts and deregulation, are making the lives of everyday Americans better.

This will be one of the key tests for Mr. Trump when he gives his speech: connecting the abstract to the particular. By a number of different metrics, the economy is doing well. But Americans still feel like they're not getting the benefits of the boom, with 49 percent telling CBS News that the country is being run for the benefit of elites.

Mr. Trump ran on a populist message and promised to deliver for working people. On Tuesday, he'll have a chance to argue that he's delivering on that promise. That brings us to…

The GOP managed to pass tax cuts in December despite the bill's widespread unpopularity. Now Republicans are hoping that the tax cuts will gradually become more popular as Americans start keeping more of their money.

Congressional Republicans had planned to spend January selling their tax cuts to skeptical voters, a plan that was quickly scuttled amid controversies over immigration, Mr. Trump's "sh*thole" remarks, and the government shutdown. But with the shutdown ended, Mr. Trump has an opportunity to trumpet his signature legislative accomplishment, so expect a lot of talk about how the tax cuts help working Americans.

Mr. Trump may have his work cut out from them on that score, however. Only 22 percent of Americans say that Congress is making economic policy for the benefit of the middle class, while 85 percent they have the interests of big campaign donors at heart. A plurality of Americans – 42 percent – say the tax cut bill won't make much difference to them personally, and only 27 percent think that their taxes will actually be lowered.

This is dangerous polling territory for Mr. Trump, who was elected in part because of his support among blue-collar voters who traditionally vote Democratic. He needs to reassure these Americans that he still has their best interests at hear. And a good way to do that would be to talk about…

When asked what the top priority for the Trump administration should be in the new year, 56 percent chose "building infrastructure like roads and bridges." Roads and bridges may be popular, but walls are not. Only 26 percent said building a wall along the southern border should be a top priority, and only 11 percent said the White House should concentrate on getting rid of Republicans who aren't loyal to Mr. Trump.

In 2016, Mr. Trump promised that infrastructure spending would be a priority for his administration. And when he signed the tax cut bill late last year, he said that infrastructure would now be his priority. "People want it – Republicans and Democrats," he told reporters. "We're going to have tremendous Democrat support on infrastructure, as you know. I could've started with infrastructure — I actually wanted to save the easy one for the one down the road. So we'll be having that done pretty quickly."

So far, the administration has not released a detailed infrastructure plan. But it shouldn't come as a surprise if Mr. Trump devotes a fair amount of his speech to touting new infrastructure initiatives. It's a popular issue with bipartisan appeal, and something that Republicans in Congress can run on in November, should they get some big projects done. After all, everyone likes smoother roads and safer bridges, even if some conservatives will balk at paying for improvements.

We sometimes think of politics in a binary way: Either you love Mr. Trump, or you can't stand him. But most Americans fall somewhere in between, meaning Mr. Trump has an opportunity to increase his support.

This doesn't mean that Mr. Trump is likely to become popular anytime soon -- his disapproval ratings have been on the rise. But he's fulfilling the desires of some voters, such as those who want tough new immigration restrictions and a border wall. He will inevitably alienate others, such as the majority of voters who think a border wall is a bad idea and want protections for "Dreamers." But it does mean that Mr. Trump's base has room to go – or, on the flipside, shrink.

In other words, Americans are still persuadable when it comes to judging the Trump presidency, and the State of the Union offers Mr. Trump a tremendous opportunity to persuade them.