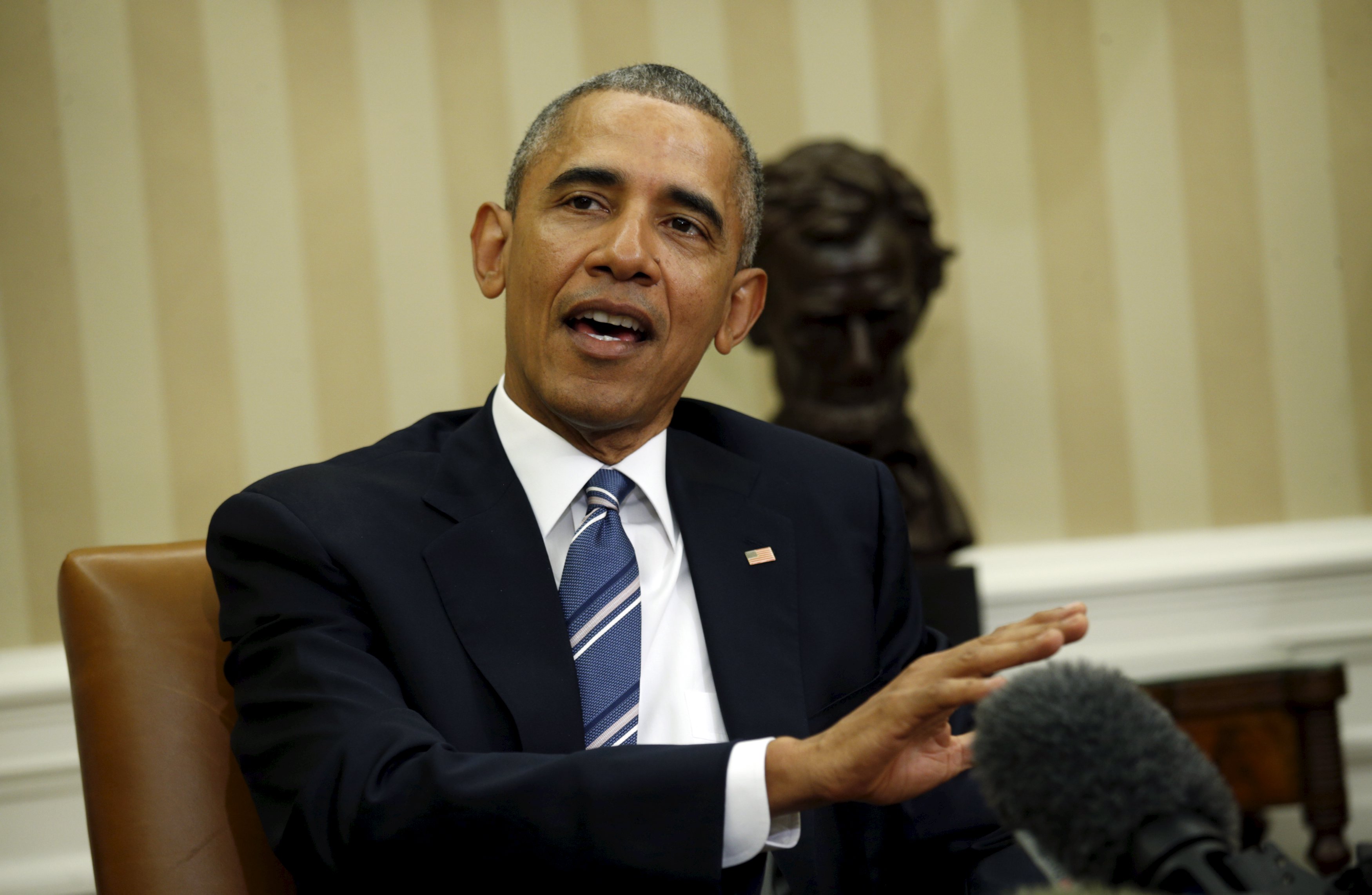 President Obama called on Senate Republicans Wednesday to "fulfill their constitutional duties" and consider a Supreme Court nominee this year, questioning their reasoning for vowing not to consider his choice to replace Antonin Scalia.

"I recognize the politics are hard for them because the easier thing to do is to give in to the most extreme voices within their party and stand pat and do nothing," he told reporters during a meeting with King Abdullah of Jordan. "But that's not our job. Our job is to fulfill our constitutional duties."

"And so my hope and expectation is that once there is an actual nominee, once this is no longer an abstraction, that those on the Judiciary Committee recognize that their job is to give this person a hearing, to show the courtesy of meeting with them," he continued. "They are then free to vote whatever their conscience dictates as to whether this person is qualified or not."

He added that it's up to the American public to decide whether or not his eventual nominee is qualified for the position--and public support for the candidate would make it tougher for Senate Majority Leader Mitch McConnell to summarily deny that person a hearing.

"I think it will be very difficult for Mr. McConnell to explain how, if the public concludes that this person's very well-qualified, that the Senate should stand in the way simply for political reasons," he said. "We'll see what happens. I think the situation may evolve over time. I don't expect Mitch McConnell to say that is the case today. I don't expect any member of the Republican caucus to stick their head out at the moment. But let's see how the public responds to the nominee that we put forward."

Obama also said the argument about holding off nominating someone because he's a "lame-duck president" doesn't hold water because he still has a year left in office.

"There's an argument that well, the president shouldn't do this because he is a lame duck," he said. "Well, the truth of the matter is that traditionally the term lame duck refers to the two or three months after an election has taken place in which a new president is about to be sworn in. I've got a year to go. I don't think they would approve of me abdicating on my duties as commander-in-chief and to stop doing all the other work that I've got to do."

As for how he's going to choose a nominee, the president on Wednesday penned a guest post on SCOTUSblog, a popular Supreme Court analysis website, detailing the qualities he looks for in a nominee and assuring readers that naming a bench appointment is "a duty that I take seriously."

For Mr. Obama, the first prerequisite for a justice who would replace the late Antonin Scalia is that the person "be eminently qualified."

"He or she will have an independent mind, rigorous intellect, impeccable credentials, and a record of excellence and integrity," the president wrote. "I'm looking for a mastery of the law, with an ability to hone in on the key issues before the Court, and provide clear answers to complex legal questions."

But the president also emphasized a nonpartisan nominee to the court, which has been back in session since Monday.

His chosen appointment would be "someone who recognizes the limits of the judiciary's role; who understands that a judge's job is to interpret the law, not make the law."

The future justice he promised to seek would hand down decisions on court cases "without any particular ideology or agenda, but rather a commitment to impartial justice, a respect for precedent, and a determination to faithfully apply the law to the facts at hand."

"I'm also mindful that there will be cases that reach the Supreme Court in which the law is not clear. There will be cases in which a judge's analysis necessarily will be shaped by his or her own perspective, ethics, and judgment," the president said. "That's why the third quality I seek in a judge is a keen understanding that justice is not about abstract legal theory, nor some footnote in a dusty casebook."

"It's the kind of life experience earned outside the classroom and the courtroom," he added, "experience that suggests he or she views the law not only as an intellectual exercise, but also grasps the way it affects the daily reality of people's lives in a big, complicated democracy, and in rapidly changing times."

He also hinted at a potential timetable for when he would officially tap a nominee, saying that he would fulfill that presidential duty "in the weeks ahead."

When he does choose to name Scalia's successor, Mr. Obama will be fighting an uphill battle to get his nominee confirmed.

On Tuesday, Senate Republicans reached a consensus that they would block all attempts at holding confirmation hearings for the president's nominee.

"I believe the overwhelming view of the Republican conference of the Senate is that this nomination, this vacancy, should not be filled by this lame-duck president," Senate Majority Leader Mitch McConnell, R-Kentucky, told reporters earlier this week after conferring with members of the GOP. Others, including former presidential candidate and South Carolina Sen. Lindsey Graham, who sits on the Judiciary committee, had said earlier in the day that there would be "no hearing, no votes."

But in his SCOTUSblog post, the president closed with his hope that the Senate would cooperate in the future and "fulfill their constitutional responsibility" to consider his nominee.

"I hope they'll move quickly to debate and then confirm this nominee so that the Court can continue to serve the American people at full strength," he said.