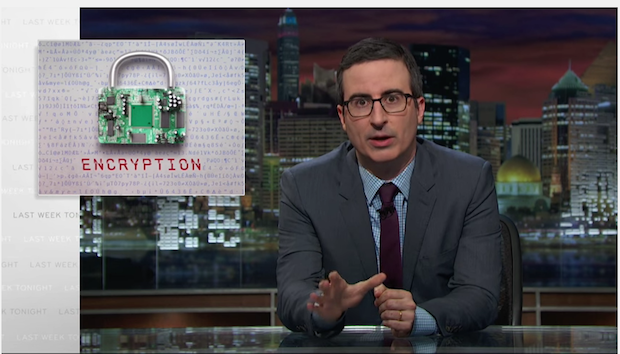 On his HBO show "Last Week Tonight" Sunday, comedian John Oliver took on one of the hottest tech issues of the day: the dispute between Apple and the FBI over encryption and access to the locked iPhone used by one of the San Bernardino killers.

Oliver tackled the issue with the same mixture of humor and serious purpose that he leveled at Donald Trump's campaign and the #OscarsSoWhite controversy in recent weeks.

Apple is currently fighting an order by a federal magistrate judge that directed the company to help the FBI gain access to the phone by creating software to override the encryption on the device. The FBI argues that the locked phone possibly contains valuable information about the attack and the killers' contacts.

Apple, however, contends that once they create a program to unlock this phone, it won't stop there. Law enforcement could turn around and ask for access into other devices, or hackers might be able to compromise security on iPhones around the world.

Oliver agrees. "This is bound to set a precedent," he said. "Think of the government as your dad. If he asks you to help him with his iPhone, be careful. Because if you do it once, you'll be doing it 14 times a day."

Watch the full clip below.