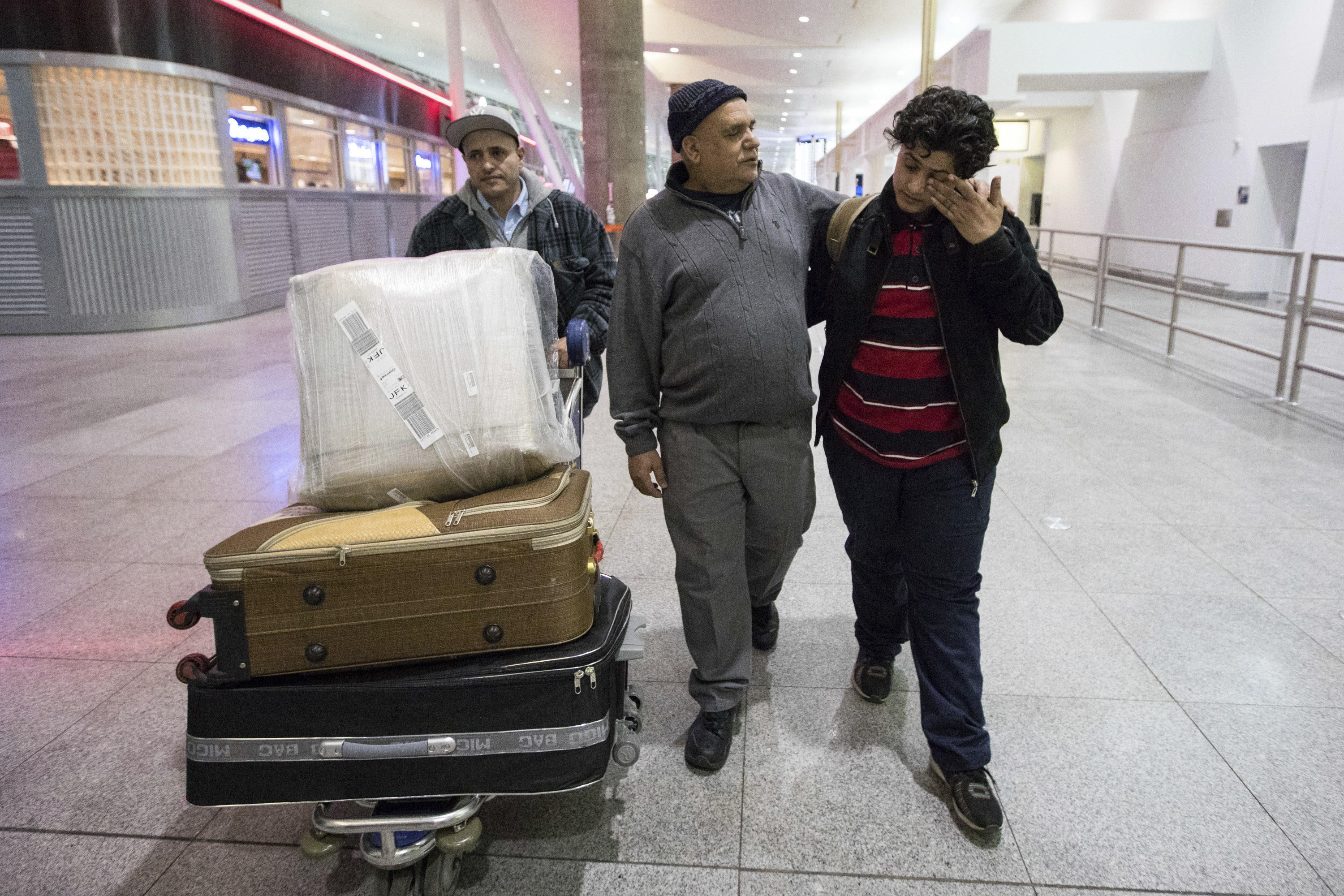 The filing with the 9th U.S. Circuit Court of Appeals in San Francisco came early Monday after the White House said it expected the federal courts to reinstate the ban.

Washington and Minnesota said their underlying lawsuit was strong and a nationwide temporary restraining order was appropriate. If the appellate court reinstated Mr. Trump’s ban, the states said, the “ruling would reinstitute those harms, separating families, stranding our university students and faculty, and barring travel.”

The rapid-fire legal maneuvers by the two states were accompanied by briefs filed by the technology industry arguing that the travel ban would harm their companies by making it more difficult to recruit employees. Tech giants such as Apple, Microsoft, Google and Uber, as well as Lyft, Airbnb, eBay, Yelp, Square, Reddit, Glassdoor, Mozilla and Salesforce—and 84 others, filed their arguments with the court late Sunday.

“America proudly describes itself as “a nation of immigrants,” theier brief begins, adding later that, “Immigrants make many of the Nation’s greatest discoveries, and create some of the country’s most innovative and iconic companies. Immigrants are among our leading entrepreneurs, politicians, artists, and philanthropists. The experience and energy of people who come to our country to seek a better life for themselves and their children—to pursue the ‘American Dream’—are woven throughout the social, political, and economic fabric of the Nation.”

Mr. Trump’s executive order was founded on a claim of national security, but lawyers for the two states told the appellate court the administration’s move hurts residents, businesses and universities and is unconstitutional.

The next opportunity for Mr. Trump’s team to argue in favor of the ban will come in the form of a response to the Washington state and Minnesota filings. The 9th Circuit ordered the U.S. Justice Department to file its briefs by 6 p.m. EST Monday. It had already turned down a Justice request to set aside immediately a Seattle judge’s ruling that put a temporary hold on the ban nationwide.

In the latest filing, lawyers for Washington state and Minnesota said, “Defendants now ask this Court to unleash chaos again by staying the district court order. The Court should decline.”

That ruling last Friday prompted an ongoing Twitter rant by Mr. Trump, who dismissed U.S. District Court Judge James Robart as a “so-called judge” and his decision as “ridiculous.”

Mr. Trump renewed his Twitter attacks against Robart on Sunday, saying, “Just cannot believe a judge would put our country in such peril. If something happens blame him and court system. People pouring in. Bad!” He followed with another tweet saying he had instructed the Homeland Security Department to check people coming into the country but that “the courts are making the job very difficult!”

Vice President Mike Pence said Sunday that, “We don’t appoint judges to our district courts to conduct foreign policy or to make decisions about the national security.” Mr. Trump himself had offered an optimistic forecast the previous night, telling reporters during a weekend at his private club in Florida, “We’ll win. For the safety of the country, we’ll win.”

The government had told the appeals court that the president alone has the power to decide who can enter or stay in the United States, an assertion that appeared to invoke the wider battle to come over illegal immigration.

Congress “vests complete discretion” in the president to impose conditions on entry of foreigners to the United States, and that power is “largely immune from judicial control,” according to the court filing.

Sen. Dianne Feinstein, the top Democrat on the Judiciary Committee, predicted the appeals court would not have the last word. “I have no doubt that it will go to the Supreme Court, and probably some judgments will be made whether this president has exceeded his authority or not,” she said.

In his ruling, Robart said it was not the court’s job to “create policy or judge the wisdom of any particular policy promoted by the other two branches,” but to make sure that an action taken by the government “comports with our country’s laws.”

Whatever the outcome and however the case drags on, a president who was used to getting his way in private business is finding only a little more than two weeks into his new job that obstacles exist to quickly fulfilling one of his chief campaign pledges.

“The president is not a dictator,” said Feinstein, D-Calif. “He is the chief executive of our country. And there is a tension between the branches of government.”

The Twitter attacks on Robart – appointed by President George W. Bush – prompted scolding from fellow Republicans as well as Democrats.

However, Pence defended the president, saying he “can criticize anybody he wants.” The vice president added that he believes the American people “find it very refreshing that they not only understand this president’s mind, but they understand how he feels about things.”

The State Department said last week that as many as 60,000 foreigners from those seven countries had had their visas canceled. After Robart’s decision, the department reversed course and said they could travel to the U.S. if they had a valid visa.

The department also advised refugee aid agencies that refugees set to travel before Mr. Trump signed his order would now be allowed in.

The Homeland Security Department no longer was directing airlines to prevent visa-holders affected by Mr. Trump’s order from boarding U.S.-bound planes. The agency said it had “suspended any and all actions” related to putting in place Mr. Trump’s order.

Pence appeared on ABC News’ “This Week,” CBS News’ “Face the Nation,” NBC News’ “Meet the Press” and “Fox News Sunday.” McConnell was on CNN, Feinstein spoke on Fox and Sasse was interviewed by ABC News.