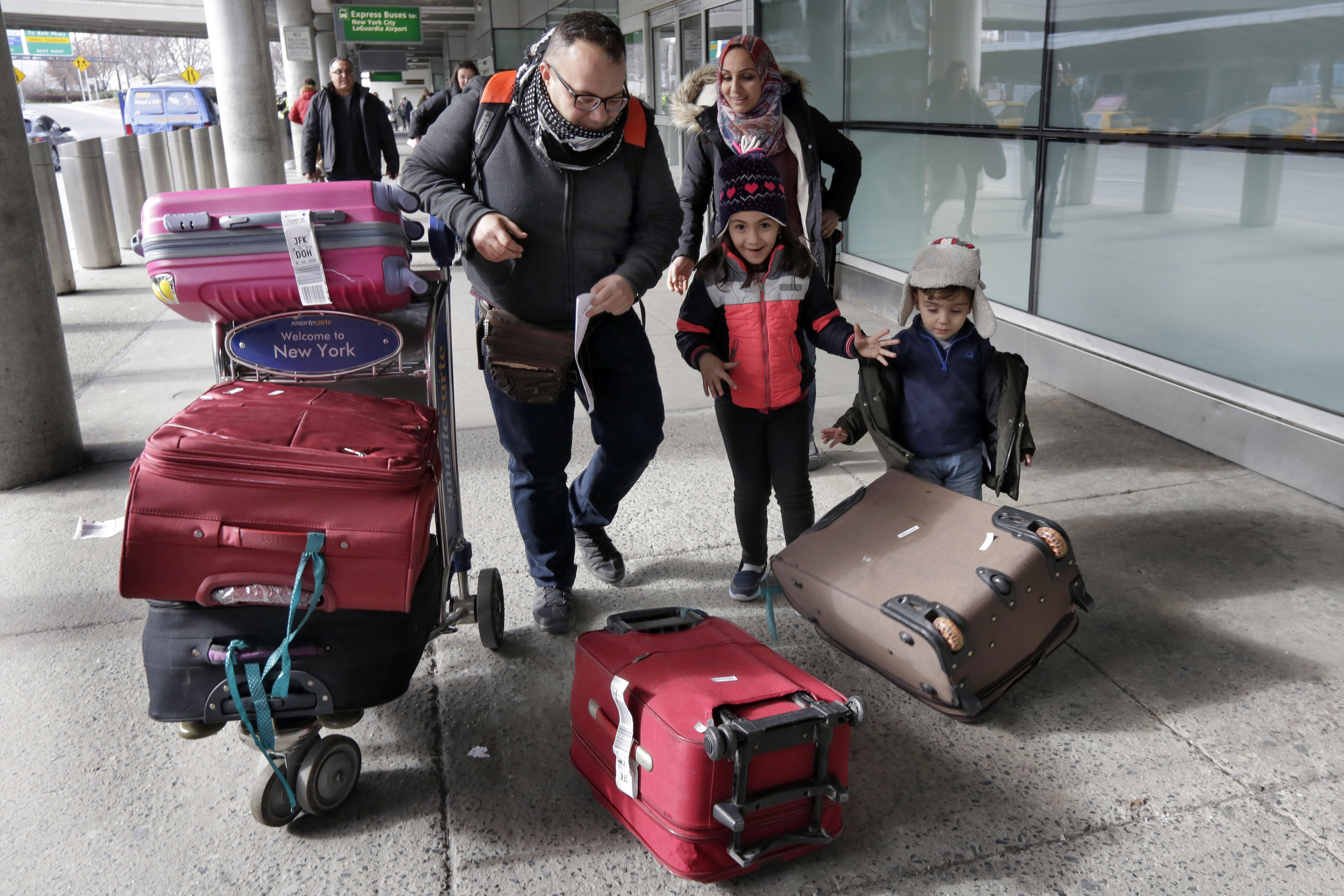 CHICAGO -- Visa holders from seven majority-Muslim countries who were turned away from the United States due to President Donald Trump’s travel ban are rushing to try again, hoping to make it through a narrow window opened by legal challenges.

The federal appeals court in San Francisco denied Mr. Trump’s effort to immediately reinstate the ban early Sunday. For now, it remains blocked by a judge’s temporary restraining order, and federal officials have told their staffs to comply.

Advocates weren’t taking any chances, telling people who could travel to get on the earliest flights they could find after the week-old ban was blocked Friday by U.S. District Judge James Robart in Seattle.

“We’re telling them to get on the quickest flight ASAP,” said Rula Aoun, director of the Arab American Civil Rights League in Dearborn, Michigan. Her group sued in federal court in Detroit, challenging Mr. Trump’s executive order as unconstitutional.

CBS News justice reporter Paula Reid says it is entirely possible that the battle over the travel ban will end up in the Supreme Court within several months. She notes that the Trump Administration “didn’t do itself any favors” in drafting the executive order that brought it into force.

Reid notes that the federal judge in Seattle who issued the initial stay on the travel ban pointed out that the Administration initially failed to address issues including travelers from the seven banned countries who had already been granted U.S. visas -- including some who got them for helping the U.S. government or military in war zones.

Vice President Mike Pence said on Sunday morning talk show appearances that “it’s quite clear the president has the ability to decide who has access to this country.”

He called the San Francisco court’s decision “frustrating” and added on “Fox News Sunday” that  the administration intends to “move very quickly” and will use “all legal means to stay that order.”

Pence said quick action is needed so Mr. Trump can take the action needed “to protect our country.”

And Mr. Trump tweeted again about the issue Sunday afternoon, continuing his criticism of the Seattle judge and saying “if anything happens blame him and the court system”:

Protesters sought to keep up the pressure, meanwhile, gathering in Denver and other U.S. cities to demonstrate against the ban. Meanwhile, legal advocates waited at airports in case anything went wrong with new arrivals.

Renee Paradis was among 20-25 volunteer lawyers and interpreters who stationed themselves inside John F. Kennedy’s Terminal 4 in New York in case anyone needed help. They were carrying handmade signs in Arabic and Farsi “that say we’re lawyers, we’re here to help. We’re not from the government,” Paradis said.

“We’re all just waiting to see what actually happens and who manages to get through,” she said.

Some people have had to make hard choices.

A Yemeni family expected to arrive at John F. Kennedy International Airport on Sunday from Egypt after leaving two of their four children behind. The father and two children are U.S. citizens and the mother has an immigrant visa, but the other two are waiting don’t have their papers yet.

“They just don’t want to take a chance of waiting,” she said.

The State Department has advised refugee aid agencies that refugees who had been scheduled to travel before the order was signed will now be allowed into the U.S. A State Department official said in an email obtained by The Associated Press that the government is “focusing on booking refugee travel through February 17,” and they were working to have arrivals resume as soon as Monday.

U.S. officials have said up to 60,000 foreigners had their visas “provisionally revoked” to comply with Trump’s order. Confusion during the rollout of the ban initially found green card holders caught in travel limbo, until the White House on Wednesday clarified that they would be allowed to enter and leave the U.S as they pleased.

Even so, green card holder Ammar Alnajjar, a 24-year-old Yemeni student at Southwest Tennessee Community College, cut short his planned three-month visit with his fiancee in Turkey, paying $1,000 to return immediately when the ban was lifted.

“I got to study. I got to do some work,” said Alnajjar, who arrived at JFK on Saturday. He said he fled civil war in Yemen and moved to the U.S. from Turkey in 2015. “I’m Muslim. I’m proud of it. Islam means peace.”

Despite the government’s suspension of the travel ban pending a resolution in court, some airlines were slow to let aboard people from the seven countries.

Royal Jordanian Airlines, which operates direct flights from Amman to New York, Chicago and Detroit, said it would resume carrying nationals from the seven countries as long as they presented a valid U.S. visa or green card.

Goldberg said she was trying to arrange flights for dozens of Yemeni citizens who have immigrant visas and were stranded in the African nation of Djibouti.

She said a supervisor at Turkish Airlines told her that people holding immigrant and non-immigrant visas from the seven countries still were being banned unless they had a special email from the U.S. Customs and Border Protection with the person’s name and passport number.

A 12-year-old Yemeni girl whose parents and siblings are U.S. citizens living in California was finally allowed to depart after “an hour-and-half of fighting” with officials, Goldberg said. It was unclear when she would arrive.

“Her mother is on pins and needles ... her father is on the plane with her,” Stacey Gartland, a San Francisco attorney who represented the girl, said in an email.

A Somali refugee said about 140 refugees whose resettlement in the U.S. was blocked by Trump’s executive order were sent back to their refugee camp and it was unclear if or when they could travel.

Nadir Hassan said the group of Somali refugees was relocated to Dadaab camp in eastern Kenya on Saturday. They had been expected to settle in the U.S. this week and had been staying at an International Organization for Migration transit center in Nairobi.

In Tehran, the semi-official Fars news agency reported that a ban on U.S. wrestlers has been lifted following the judge’s ruling, allowing them to take part in the Freestyle World Cup later this month in the Iranian city of Kermanshah.